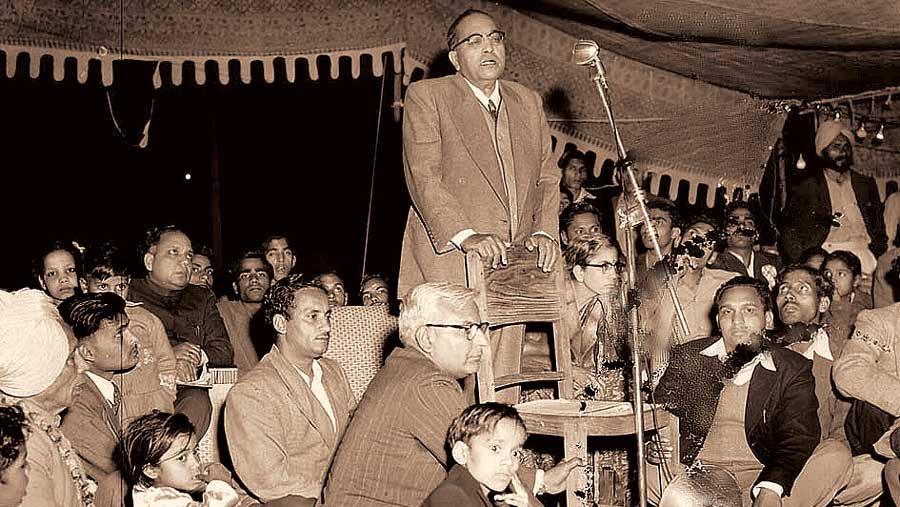 Much of academic writing on Dalits, especially in the West, is focused on showing Dalit assertion as a rejection of, and a rebellion against, Hinduism. This is mainly because B.R. Ambedkar, the greatest of all Dalit icons, renounced Hinduism and embraced Buddhism just a couple of months before his demise in 1956. In recent times, the writings of Gail Omvedt, Arundhati Roy and many others have sought to reinforce the belief that Hinduism is fundamentally inimical to a life of equality, justice and dignity for Dalits. This dogma is effectively disproved by this book.

Consider this. In their book, the researcher, Sudarshan Ramabadran, and the Bharatiya Janata Party spokesperson, Guru Prakash Paswan, profile eighteen ‘Makers of Modern Dalit History’. Nearly each one of them, including Ambedkar, has a positive association with Hinduism. Ambedkar dedicated his book, The Untouchables, to three Dalit saints — Nandanar from Tamil Nadu, a Shiva bhakt; Guru Ravidas from Uttar Pradesh, a Ram bhakt; and Chokha Mela from Maharashtra, a devotee of Vitthala, an incarnation of Vishnu. Ambedkar had high praise for Ramanujacharya, an 11th-century Vaishnavite philosopher and social reformer. “According to Ambedkar,” the authors write, “Ramanujacharya accepted a Dalit as his guru; this sent a strong message to society about integration being the sole way forward.”

This is also true about other Dalit heroes featured in the book. One of them, Ayyankali from Kerala, “was deeply influenced by Swami Sadananda, a reformist Nair ascetic who stood against discriminatory practices, and in this he mirrored his contemporary Narayana Guru”. Gurram Jashua, a revolutionary Dalit poet in Telugu, wrote about Vishnu, Shiva and Parvati. Jagjivan Ram, the tallest Dalit leader in the Congress, “chose to strive for equity and social justice from within the folds of Hinduism”. Surprisingly, he was also “present at the meeting in which the Vishwa Hindu Parishad... was formed.”

The book also profiles the creators of two great Indian epics — Valmiki, the author of the Ramayana, and Veda Vyasa, who penned the Mahabharata and also compiled the Vedas. The two works have greatly influenced the lives of successive generations of Hindus, including Dalits (Valmikis constitute a major caste among Dalits today). Ambedkar himself likened the Constitution of India to a modern-day epic, for he said, “The Hindus wanted the Vedas, they sent for Vyasa, who was not a caste Hindu. The Hindus wanted an epic, they sent for Valmiki, who was an untouchable. The Hindus wanted a Constitution, and they have sent for me.” The general perception is that Ambedkar was anti-Hindu. A more in-depth and nuanced study of his life (what is presented in this book is very sketchy) would surely refute this notion.

Undoubtedly, untouchability and caste discrimination have been the biggest blots on Hindu society. The book does not whitewash this stark truth. “Dalit literature,” it correctly observes, “is not only about hunger, poverty, oppression and subjugation; it is also about the resistance of the disempowered against the negative forces put in place by dominant groups.” But the overall picture it offers is that of Hinduism as a perennially self-reforming and self-renewing religion and culture in which both internal struggle and socio-spiritual harmonization have gone hand in hand. As the authors put it, “Confrontation is not the answer, but the need of the hour is a constructive path that leads to collaboration.” Therefore, the book can be best described as an anthology of Hindu-Dalit reconciliation. It must not be forgotten that even today Dalits who are neo-Buddhists are far outnumbered by those who call themselves Hindu.

A major flaw in the book is the absence of a detailed assessment of Mahatma Gandhi’s spirited nationwide campaign against untouchability. Gandhi’s contribution is superciliously dismissed by most Ambedkarites. The book errs in crediting Ambedkar with the inclusion of the principle of ‘one man one vote’ in the Constitution. As Granville Austin writes in his authoritative study, The Indian Constitution: Cornerstone of a Nation, “Since the nineteen twenties, the Congress had demanded adult suffrage for the people of India...” The book is also marred in some places by exaggerations bordering on falsification, which, unfortunately, is typical of much writing on the condition of contemporary Dalits. Consider this sentence, for instance: “Even today, Dalits cannot enter a house by the main door, they cannot drink tea in a local tea shop, and Dalit children cannot sit non-Dalit ones.” In how many Indian cities, towns and villages is this true today? On the contrary, there has been a significant (although by no means complete) socio-economic transformation in the lives of Dalits due to the strong message of social equality enshrined the Constitution (in the making of which Congress leaders made a greater contribution than Ambedkar), the policy of reservations in education, jobs and electoral constituencies, and the social reform activities of a large number of Hindu saints and organizations, including the Rashtriya Swayamsevak Sangh. India has also begun to produce a small number of Dalit entrepreneurs, who have now formed a platform called the Dalit Indian Chamber of Commerce and Industry.

As the authors themselves point out citing the 2011 Census, “the literacy rate among India’s Dalits grew faster than that of the general population.” In several Indian states, the candidates for the post of sarpanch from the scheduled castes, scheduled tribes and other backward classes won more seats than those reserved for them. In the 2017 assembly elections in UP, Dalit candidates of the BJP, which is unabashedly a Hindutva party, “won in seventy-five out of eighty-five assembly constituencies reserved for scheduled caste candidates”. Non-Brahmins and even women can now become priests at the temple in Pandharpur, a major pilgrimage centre in Maharashtra dedicated to Vitthala (two of the women saints profiled in the book, Sant Janabai and Soyarabai, were devotees of Vitthala).

The book is sure to earn the ire of traditional Ambedkarites and communists because it shows Hinduism in a critical but positive light. The ensuing debate would certainly be useful.