Advertisement
Home / Culture / Books / From wonder to desire: Encounters between India and the West

From wonder to desire: Encounters between India and the West 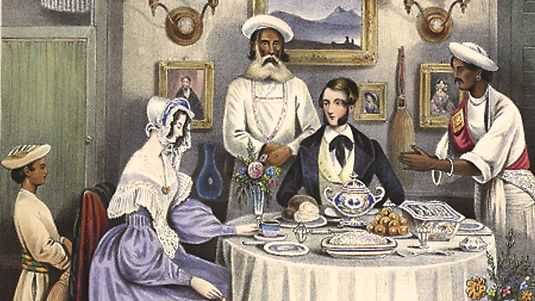 The Breakfast. A young married couple (an East India Company civil servant and his wife) breakfasting on fried fish, rice and Sylhet oranges, with servants in attendance. Lithograph by J. Bouvier. Sketches illustrating the manner and customs of the Indians and the Anglo-Indians. London, Thomas McLean, 1842.
Wikimedia Commons
Iman Mitra   |   Published 20.11.20, 07:30 AM

The encounters between India and the West between the sixteenth and nineteenth centuries have been discussed so extensively that any new contribution to the field rouses either fatigue or an undue expectation. The editor and the contributing authors of Desiring India: Representations through British and French Eyes 1584-1857 must be commended for maintaining a fine balance between the two and for coming up with an anthology that will attract both academic and non-academic readerships. One of the reasons for this is the freshness of the approach, which explores both British and French accounts in the same book and attempts a comparative analysis of the lenses through which each envisioned India. The ‘Introduction’ to the anthology makes it clear that its purpose is not to homogenize the colonial perspectives and present a seamless narrative of wonder and exploits. By bringing together an impressive collection of accounts by merchants, travellers, officials and intellectuals and analysing their distinct voices and representational techniques, it reminds us of the many Wests that congregated in the ‘Orient’ and constructed the ‘Oriental’.

That does not mean that the book lacks a framework. Any anthology, for that matter, needs to invest in an organizing principle that will justify the inclusion of the essays between its two covers. In this case, the ‘Introduction’ asserts that it wishes to replace “the trope of discovery and wonder with that of desire and representation”. Indeed, the marvellous narratives that had once populated the Western memory of the colonial encounter — the residue of the classic Orientalism from the nineteenth century — have long been challenged by the critical rejoinders of postcolonial theory and Desiring India, by listing some of its inspirations, has evinced its allegiance. With the insistence on close reading of some of the texts that the individual chapters discuss, it also manages to reflect on the discursive character of its own framework. The essays seem to be aware of the strengths and limitations of such an analytical orientation resulting often in an inevitable chasm between history and discourse.

The book has 12 chapters barring the Introduction. The inaugural essay by Supriya Chaudhuri describes the adventures of Ralph Fitch, an English merchant, who travelled to Bengal in 1584 at a “critical moment of its history: a history closely related to the major global movements of the time, while attaining its own, unique cultural momentum.” Neither Fitch nor his Bengali contemporaries like the poet, Mukundaram Chakravarti, the author of the famous Chandimangala, acknowledged the significance of this encounter in any other way except Bengal’s desirability in an emerging global trade network. The lack of dialogue does not indicate a limited representation but the liminality of the protocols that would dictate the subsequent acts of desiring. 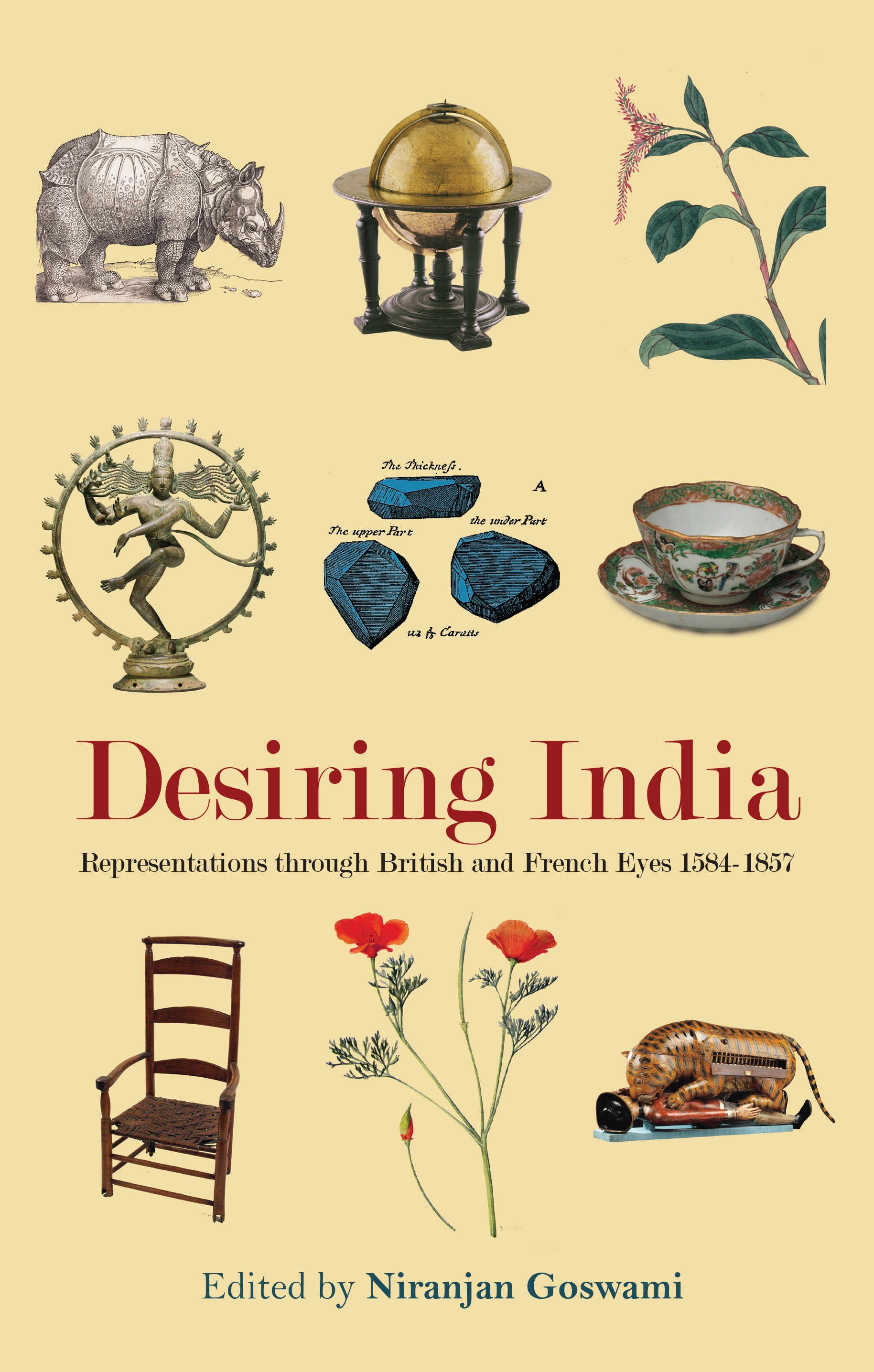 The rest of the essays chart out some of these protocols that navigate between the desired and the undesired, and, sometimes, even the undesirable, spreading over a range of historical contexts and thematic concerns. Niranjan Goswami’s study of Tavernier’s Travels in India, for example, shows how the text engages with the material culture in a broader sense by incorporating both the objects of trade — ‘things of matter’ — and the social and cultural elements like sati or the caste system — ‘things that matter’. Romita Ray, on the other hand, approaches material culture by juxtaposing etiquette, porcelain, race, gender and aesthetics in the visual representations of tea drinking in colonial Calcutta.

The question of aesthetics also appears in Abin Chakraborty’s reading of Thomas Coryat’s letters where the affirmative appraisal of Jahangir’s court unsettles the usual tropes of the early occidental disdain. Anna Becker’s analysis of the role of female bodies in the Mughal court based on several accounts examines the patriarchal connotations of ‘oriental despotism’ whereas Rita Chatterjee’s study of the letters of Eliza Fay reveals how the misogynistic attitude inherent in colonial trade tried to suppress the entrepreneurial ambitions of a gendered subject. Both Swati Dasgupta and Janani Kalyani focus on the representations of Indian women in the French literary and theatrical circuits, respectively. Dasgupta chronicles the role of women participating in the Mutiny in the writing of Clémence Robert while Kalyani takes up the theme of sati in the French plays from the late eighteenth and early nineteenth centuries.

In Jyoti Mohan’s reflections on the three historical accounts of India in French, we come across a project of recreating a glorious past devoid of an overtly imperial agenda that coloured the histories written by the British. By exploring a historical trajectory of the movement of indigo, Jayati Gupta shows how the knowledge and the experiences of an object are subjected to a taxonomic representation traversing both the natural and the commercial axes of desirability. John Hutnyk’s study of Marx’s concept of the Asiatic mode of production positions the colony at the centre of his critique of political economy. In the final essay of the book, Soumya Goswami discusses the faltering attempts by the orientalists to systematize Indian classical music. By any standard, this is an exciting list of topics. There is a slight unevenness in addressing the central theme in some of the essays but that is too tall a task for a volume with such a diverse range of interests and concerns.

Coming back to the central theme of the volume, what has piqued my interest in the ‘Introduction’ is a quote from Voltaire where he says, “But nature had given them [the Orientals] one advantage over us which outweighs all ours: namely that they had no need whatsoever of us, while we were in need of them.” It is a different question whether this non-reciprocity of need was historically supported, but if we take this impression seriously, it raises an interesting question about the desires that characterize the colonial encounters in the earlier times. As we are repeatedly reminded, the advent of colonialism was accompanied by a new science of wealth based on private property and exchange, initiating a paradigm of reciprocity that inculcated liberal values and expectations in the nineteenth century. But what happened to the non-reciprocal desire in this new order of things? Was it completely replaced by demand as the new rhetoric of need or was there any residue in some obscure form? By shifting the focus from wonder to desire, the volume comes close to a critical exposition whereby one may think of the colonial encounters beyond the duality between the exact and the exotic and engage with the interplay between desire and demand — a theme that remains to be studied in greater detail.