Uma Das Gupta’s book is a brief, but immaculately researched, account of the experiments in rural reconstruction carried out by Rabindranath Tagore 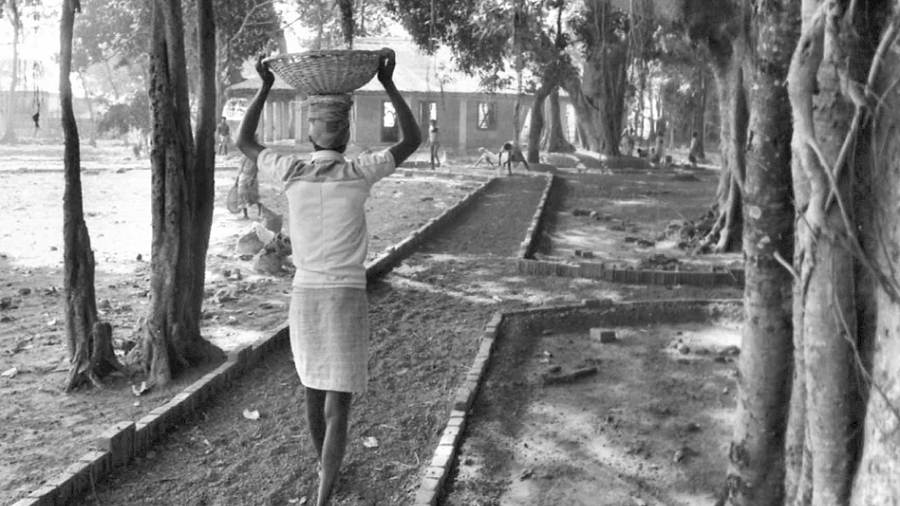 For most of us, Rabindranath Tagore is primarily a poet who also made significant contributions to the development of modern Indian thought and pedagogy. Some of us know of his work as a painter and many of his experiments in education which we associate primarily with the place where Visva-Bharati, the international university he founded, is located, in the town of Santiniketan. Not too many know of another fascinating and profoundly important enterprise the poet-philosopher embarked upon in the last couple of decades of his life — the work of rural reconstruction that he was engaged in, along with a handful of dedicated workers (including his son, Rathindranath), on a large plot of land adjacent to the hamlet of Surul that he purchased in 1921 from the Sinha zamindars of Raipur and named Sriniketan. Uma Das Gupta’s A History of Sriniketan: Rabindranath Tagore’s Pioneering Work in Rural Reconstruction is a relatively brief, but immaculately researched, account of the experiments in rural reconstruction carried out by Rabindranath and is enriched by illustrations of people and products and facsimile reproductions of four texts that flowed out of Sriniketan in its halcyon days.

Divided into an Introduction and eleven chapters, Das Gupta’s book begins by locating the catalyst for Rabindranath’s near-obsession with matters rural to his stint as a manager of the Tagore family estates in Selidaha when still a relatively young man; moves on to the origins of the “Sriniketan experiment” some thirty years later; examines issues related to land and a nascent nationalism in the 1920s and the 1930s; describes the ideals and objectives of Sriniketan and compares them to its actual achievements; considers some of the specific activities carried out in Sriniketan (new methods in agriculture, new kinds of cottage-based industry, the formation of cooperative health societies, and so on); before coming to the final chapter on “Some Endemic Problems, Some Tentative Conclusions”

The thread that binds Das Gupta’s narrative is the way in which “Rabindranath’s work for rural reconstruction was a remarkable combination of a poet’s faith in humanity along with a reformer’s zeal”, which envisaged the task of such reconstruction as not merely one of economic uplift but contained the “no less important goal of bringing joy to the lives of the village people”. In trying to achieve this with little or no support from the Bengali bhadralok, who had, by the time of the Sriniketan experiment, successfully turned Rabindranath’s radical pioneering efforts in education at Santiniketan into “becoming more and more like so many schools and colleges elsewhere in this country, borrowed cages that treat the students’ minds as captive birds whose sole human value is judged according to the mechanical repetition of lessons prescribed by an education dispensation foreign to the soil” — to quote from a letter Rabindranath wrote to Leonard Elmhirst in December 1937 — Rabindranath was attempting something truly heroic, and perhaps even wrong-headed (as many of his acquaintance firmly believed). But the significance of what Rabindranath attempted, with the aid and assistance of a small band of dedicated workers, including the aforementioned Leonard Elmhirst, who, along with his wife, Dorothy Elmhirst, remained one of Sriniketan’s staunchest supporters in a myriad ways, lies not so much in what it actually achieved but in what it showed could be done with hard work, compassion, and a cooperative spirit to alleviate the lot of the most wretched of our citizens.

A fascinating aspect of this book is its appendices, the first of which is a “Rural Survey [of] Ballabhpur”, published in 1926, which notes not just the lives and livelihoods of the denizens of Ballabhpur but also takes note of their manners and mores. For example, under the subsection, “Drink”, the survey notes, “Both men and women of the lower castes drink wine. The men frequent the fermented liquor shop on their way home from daily labour but the women drink only on festive occasions.” Under “Marriage”, the relative freedom of the women from the lowest stratum is noted: “… the custom of divorcing the husband and taking to a “companion” (a second husband) is obtained among the untouchables.” The second appendix, “Three Village Economic Studies on Rice”, by the Cornelltrained Hashim Amir Ali is no less fascinating. The third appendix is a sample of an anti-malaria campaign handbill, while the fourth is a catalogue of “Sriniketan Handicrafts” dating back to 1933-34. Both repay careful perusal.

Das Gupta’s rich narrative and the evocative appendices make this book a must read for anyone interested in the history and development of the efforts to make life richer, in all senses of the term, for the poorest, lowliest, and the most neglected sections of our society. The only quibble I have with this otherwise excellently-produced work has to do with the quality of the photographs that make up its last twenty-six pages. Better reproductions would have given us a richer sense of the people, the places, and the things that went into the making of this remarkable experiment.