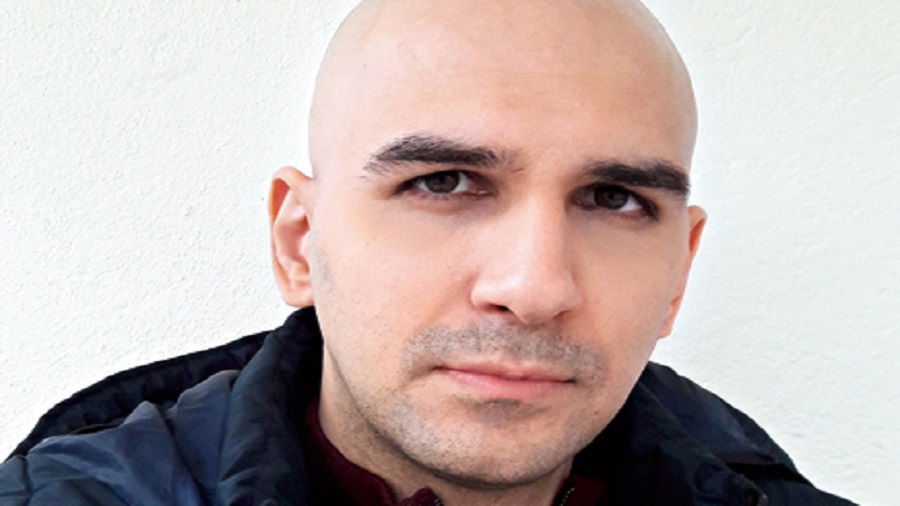 There were three ideas that came together in Oop and Lila — snow globes that contained entire worlds in them, wish-candies with 99 wishes and exploring the sibling dynamic: Olivier
Sourced by the Telegraph
Published 06.09.20, 06:21 PM

Olivier Lafont spent 30 years of his life in India before moving back to Paris a couple of years back, to connect with his French roots. Most of us remember him as Suhaas, who was ditched at the altar by Kareena Kapoor’s Pia in 3 Idiots. But there’s more to Olivier who, along with being an actor, is also a writer. Olivier has now written yet another children’s fantasy novel, Oop and Lila: Lost in the Scarabean Sea (Hachette India; Rs. 350), that tells the tale of two siblings who embark on a surreal journey surrounded by pirates and wish-making candies. “Writing is a very internal process while acting feels slightly external and I enjoy both the roles immensely,” he tells us. He joined hands with Hachette India and Storytellers Bookstore in Calcutta to be on an exciting online session discussing all things books with viewers on social media.
He moved to India when he was seven years old and moved out a couple of years back to connect with his French roots, but the Bandra spirits still call out to him and he misses the city and the country immensely, he continues. He wouldn’t mind coming back to India for fun and cerebral roles and if the stars align and time and place just work out on their own. But he isn’t holding his breath. He fondly remembers his previous experience with the Indian film industry but the world of French cinema and television keeps him on his toes now. The Telegraph had a fun Zoom call with Lafont discussing his new book and recounting fond memories from his time with Bollywood. Excerpts...

Why fiction and why fantasy?

I have been reading and writing fantasy for a while now and my previous book The Rise of the Midnight King (2019; Talking Cub) that has recently been shortlisted for the Neev Books Awards 2020, is also children’s fiction. I feel that there is a lesser gap between fantasy for children and fantasy for adults as there is in any other form of fiction. A good example would be J.K. Rowling’s Harry Potter series. And I have always been comfortable writing fantasy.

What kind of books did you read when you were growing up?

I moved from France to India when I was about seven years old. I didn’t know English or Hindi and had a massive culture and language gap. One of the ways I mastered the English language was through reading, with easier access to fiction. Going to an international school meant I had access to a lot of international titles as well that wouldn’t be found so easily otherwise. So Tolkien, Terry Brooks, Terry Pratchett, Michael Moorcock and of course Enid Blyton and her seminal works that included illustrations with texts. Those images stayed in your mind and I couldn’t separate them from her texts. Amar Chitra Katha was one collection that was deeply rooted in Indian culture as opposed to other authors I was reading that was more for a western audience. I did a recent session with Amar Chitra Katha and it was so wonderful; like coming a full circle. I still read a lot of fantasy fiction, a love story that started at age eight or nine!

Could you take us through the inception of Oop and Lila…

My general methodology is collecting a list of ideas that have been ongoing for years and I keep adding to it. These ideas range from a scene to a full story even, dialogue or an interesting character. Some of these things stay on my mind and come to mean something to me. Over time, some of these things tend to come together. There were three such ideas that came together in Oop and Lila — snow globes that contained entire worlds in them, wish-candies with 99 wishes and exploring the sibling dynamic! Especially the 99 wish-candies because, with a genie and his three wishes, one tends to get cautious. But one can be a glutton with 99 wishes!

I had to choose a setting, as to where the first snow globe adventure should be and the pirate setting just evoked. Even within the pirate setting, the golden age of the 1600s somehow fit in our real world. I was familiar with the Caribbean pirates but I knew nothing about the Asian pirates. So for me to discover Kanhoji Angre, the Maratha admiral and it was just such a seamless integration into my book. When you have all those elements, that was the beginning of the work. Once it has reached a critical mass of ideas, then only do I start writing. I know the general direction I am going in but I also want to explore and find things out myself as I write.

Do you feel any pressure of being morally correct because you are writing for children?

I think there are two levels to this. There are certain conventions that you know you don’t write for children. But I don’t think there is any particular obligation to write a moral story. The second layer is then whether you want to make or put a moral layer to the story. That was there with Oop and Lila because it gave another layer of meaningfulness to the story. They could have just had a wonderful adventure, like Enid Blyton’s The Magical Faraway Tree but I wanted to bring in the moral angle in Oop and Lila. For me, it gave it a certain personal depth alongside the fun and adventure. So that was a conscious thing that I did want to do, yes.

What attracted you to Bollywood without even knowing the language?

There was something I felt and saw when I was first introduced to Bollywood at 19. I used to be in the US and I would come back for holidays to spend time with my family. There was a specific kind of energy that I saw in Indian films, you know? Western films are generally more rooted in reality whereas the fantasy element of Indian films really appealed to me. That people just break out in larger-than-life dances was so enticing. There was the fluidity of expression without having to stay rooted to reality! That as a form of artistic expression was very appealing to me. And I missed India, nostalgically, so there were a number of reasons why I chose to come back to India.

How was your experience with the Indian film industry, if you had to sum it up?

It was really fantastic, to be honest. Coming from a multi-cultural background, I have always had an interest in languages. It’s very different learning a language as a child as opposed to doing it at 22, when it’s very intellectual because you are more aware. It was such a nice feeling of accomplishment. So learning it was such fun.

I loved working with Kareena Kapoor and Aamir Khan. Everybody was so kind and wonderful to me. When I shot that particular scene with them with the watch, it was a night shoot and I came in and was getting my bearings. In a shoot, time is of the essence, you know? And I knew my lines, I had everything in place. She was so kind and she said, “Take your time, you can take all night if you to want,” and you know, she didn’t have to say that but she was so kind. However, my highlight was shooting for an ad with Amitabh Bachchan. I mean, I watched Coolie when I was young and then to meet and shoot with him was surreal!