The author is adding suspense, mystery and thriller elements to give ancient mythological stories a modern twist 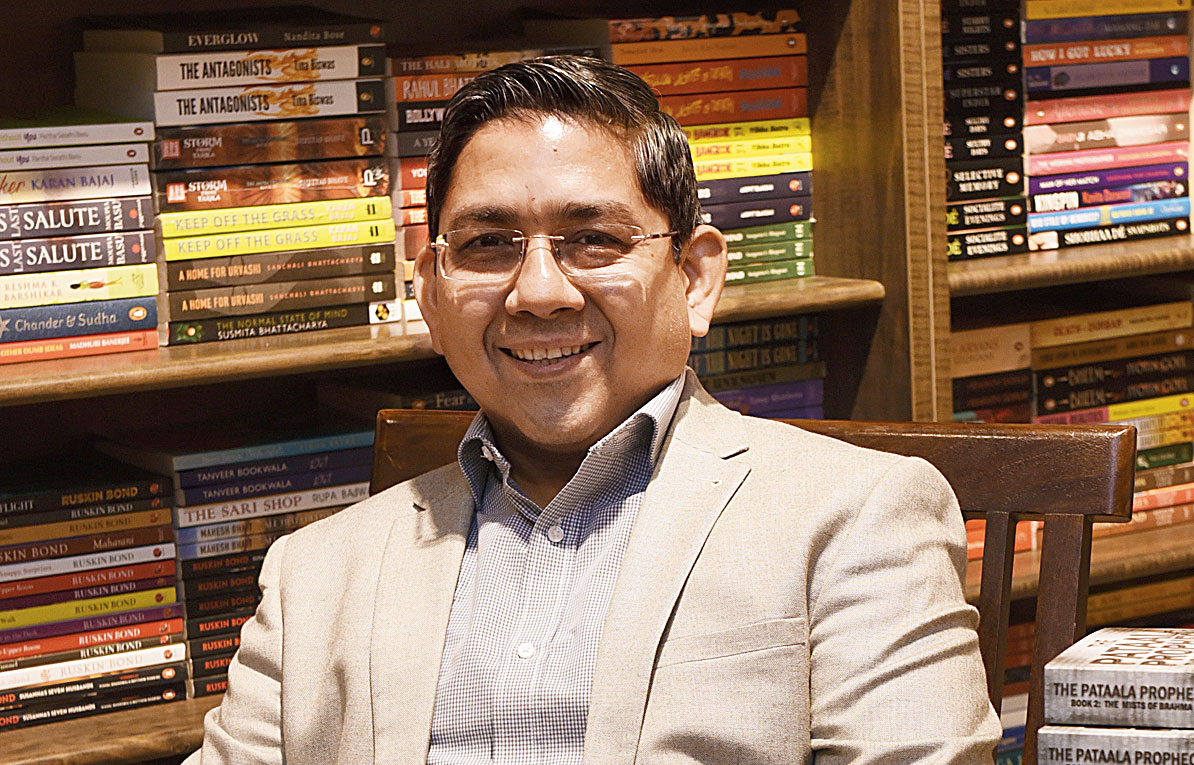 Christopher C. Doyle has carved a name for himself as the Indian equivalent of Dan Brown, a writer who creates thrillers based on Indian mythology. What sets him apart, perhaps, is that he is not looking to reinvent the way we read mythology like so many of his peers are. Instead, he chooses to find a common ground between technology, history and mythology and fictionalise the account to give you a fresh new piece of work.

He has two separate series of books — The Mahabharata Quest series and The Pataala Prophecy series — running in the world of publishing currently and the corporate honcho manages a book club online, an investment firm and a book to his name every year since he began writing.

We were wondering how many hours this bestselling author has in a day as opposed to the measly 24 hours that we have been dealt with, when t2oS met up with him at The Oxford Storyteller Bookstore on Picnic Garden Road. Here are some snippets from our chat with the soft-spoken author from Gurgaon. Excerpts.

What brings you to Calcutta?

The first is, of course, The Mists of Brahma, the new book which is second in the Pataala Prophecy series and I am on a city-wide tour for it. Apart from regularly visiting bookstores, I am also doing sessions with kids at schools because that’s where a reasonably large portion of my readers are.

It was never intentional, but somehow, school children really found resonance with my books. I always love to interact directly with readers and this is a good way of getting to meet a lot of readers and potential readers and ask them about not so much the books, but about the research that I do for my books.

Tell us your thoughts on the changing face of the genre that is fiction based on mythology?

So a lot of people who are writing about mythology today have adopted the same approach. It’s looking at what’s there in mythology, but from different perspectives. If you look at titles around the market today, they are broadly around the same theme.

The kind of books that I write, which are set in modern times and use a mythological base with mystery, suspense and thriller elements, I am surprised no one has attempted it yet. Not really surprised also, because a lot of research is required to create something along the same lines.

The only person who has possibly come close to doing something similar is perhaps Ashwin (Sanghi) and he, too, dabbles in a lot of genres. Chanakya’s Chant was not mythological at all. So from that perspective, I don’t really see a change. I just see a deepening and widening of the same approach.

As for acceptance from readers, has there been a change?

I can only tell you what readers tell me and I find this from readers who have, perhaps, never read my books. They say to me: “Oh no! We saw The Mahabharata Secret and thought, not another mythology book!” So, I do feel a kind of fatigue is setting in. How much can you read about Duryodhan, or Arjun or any particular character from the Mahabharata? How many perspectives can you muster up? It is, at the end of the day, the same story that is being told. Based on what readers tell me, there is probably a saturation point that is being reached or has already been reached.

Are you looking to experiment by moving completely away from mythology?

Not at this point, for two reasons. One, I am trudging a pretty lonely path on that perspective and I am happy with that because it helps me to stand out. Again, based on what my readers tell me, the only reason they read what I write is because they feel my approach to be different. They get to know a lot of mythological facts but they also get to know a lot about science and history.

Why did you start another series before finishing the first one though? Was it like readers’ fatigue and wanting a change?

Whereas the Pataala Prophecy series is an aircraft read.

The third book of the Mahabharata series was taking too long because of the intense research. I wanted to give my readers something to read because it had already been two-three years since the last one. The latter was much easier to write because I had been knee-deep into the research for the past 15 years. Whereas in the former, every new book requires a fresh outlook and has to be worked on from scratch — you are working on a new science, a new history, a new facet of mythology. So it was my way of saying that I am still going to give my readers a book every year. My first book was published in 2013. 2015 and 2017 are the only two years when I haven’t had a book published!

For me, the research begins with the reading of the original text — for the Quest series that meant reading the Mahabharata. I read it twice but it’s been some time since then. Before, I could directly quote from the text too, but I am rusty now. I am fairly well aware of what is where and if I had to tell you something and I am sitting in my home, I would know which volume to take out and from where.

So that research is done and dusted and I have moved on to other texts, like the Vedas or Shrimadh Bhagwatam. What I did while writing was taking the help of Vedic scholars so that I could get my facts or interpretation right. I have an idea, I get the idea validated by scholars and PhD students who help me with translations. And once I have a clearer idea, I sit down to write. However, the Quest series is a little more complex because it starts with science.

I like to look at cutting-edge technology and what’s happening today that people wouldn’t have heard about, to be able to retain the novelty factor. Because I have read the Mahabharata, I immediately start wondering if there is a possibility of a connection anywhere. Then I start creating a hypothesis for that connection and talk to experts in that field to validate my hypothesis. The connection may be fictional, but it has to be based on real science. It is only when the research is done do I sit down to write, so I must say that it’s a fairly rigorous process.

I don’t write every day because I am not a full-time writer. I write when I get time, unless I am on a deadline. Like when the last book was coming out, three to four months prior to that I had to make a plan and set aside a few hours every day when I would write and edit. Three years have gone by since the Mahabharata Quest last book. If I had a diligent writing time, I don’t think I would have taken this long to write the next book.

You had put up one of your books online for consumption for free. What was the idea behind that?

I run an online club called The Quest Club and it is my way of directly interacting with readers and get their perspective and thoughts on my books, while putting up my research online, giving them more value. So I thought it would be nice to give them a story for free. I thought of what it was that I should write that would get them excited and it suddenly occurred to me that I had ended Alexander’s Secret on a cliffhanger.

The epilogue says that there is a call that will come six months later. Everyone assumed another book would come out in six months so I started getting calls! Which is when I thought that this was a good way of bringing the book to a logical conclusion and telling them what happened six months later. I wrote and published this over six months with one chapter coming out every month.

Both my objectives were met — readers were happy they got some sort of a closure and they saw value in the fact that they had something to read that they didn’t have to pay for. We have about 11,000 members, across 20 countries, in the Quest Club and it worked out really well because readers demanded that I publish this as a physical book and my publishers agreed. It even made it to the bestsellers list in the country!

What is your relationship with social media?

It has never been very strong to start with. I started my Facebook page when the first book came out, but I was only posting about the launch and have always been a very sporadic presence. It’s the same thing with Instagram. I am much more active during a book launch and run contests to make it interesting for readers. I am not on twitter at all because I feel it’s too toxic and I am not into one-liners. My focus has always been on the Quest Club and I find it a much more dedicated way of interaction. When people are logging in, they are doing so solely to talk to me and not with 500 other distractions.

Any change in the publishing industry that you have noticed?

I am seeing lots of Indian authors. Of course there were the trailblazers like Amish, Chetan (Bhagat) and more, but in the last six years the industry has boomed. Indian writing in English is flourishing now and how! The process has also become more democratic I feel and we should let the audience decide what they want or don’t want to read.