Lessons from Ambedkar and Gandhi to take forward

They represented two foundational but antagonistic visions of “what we as a society, what we as a state should embody” 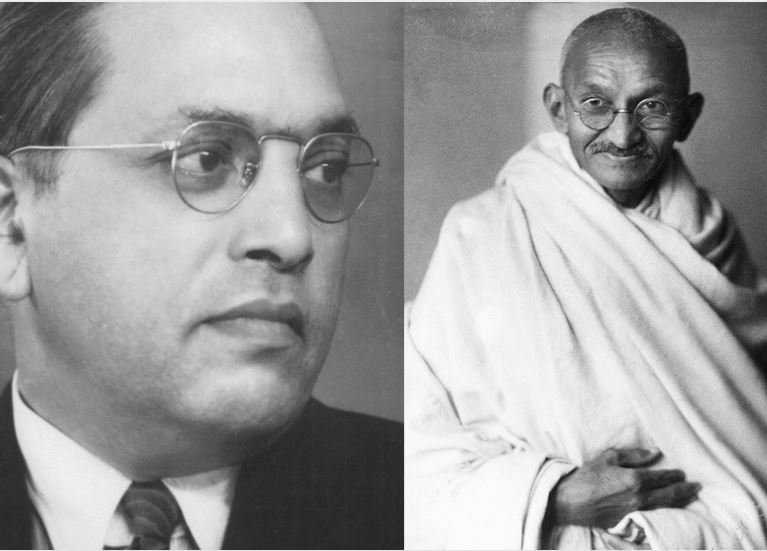 The book, Radical Equality: Ambedkar, Gandhi, and the Risk of Democracy by Aishwary Kumar, takes forward the conversation around the two “most formidable non-Western thinkers of the twentieth century, whose visions of moral and political life have left the deepest imprints”.
Wikimedia Commons
Subhash Gatade   |   Published 20.02.20, 11:23 PM

In the early 1990s D.R. Nagaraj published The Flaming Feet, a compilation of his essays in which he admired both Gandhi and Ambedkar. Coming close on the heels of the phenomenon of Dalit assertion, it argued that “there is a compelling necessity to achieve a synthesis of the two”. But that has not been the only attempt to examine how the ideas of these two leaders interacted, challenged each other, and how they extended or revisited the meanings of different concepts.

The book, Radical Equality: Ambedkar, Gandhi, and the Risk of Democracy by Aishwary Kumar, takes forward the conversation around the two “most formidable non-Western thinkers of the twentieth century, whose visions of moral and political life have left the deepest imprints”. For the author they “exemplified two incommensurable ways of forging a relationship between sovereignty and justice, force and disobedience”, or represented two foundational but antagonistic visions of “what we as a society, what we as a state should embody”.

Focusing mainly on Hind Swaraj — a monograph written by Gandhi on a ship to South Africa from London (1909) — and Annihilation of Caste, which happens to be the undelivered speech by Dr Ambedkar when he was invited by the Jat Pat Todak Mandal, Lahore (1936) — the organization rescinded the invite when it came across the ‘radical’ proposals he had put forward in the draft — this around 400-page book discerns “an insurrectionary element at the limit of politics” in the works of these two stalwarts. It is “an insurrection that sought to extract the political itself — and the social question — from the doctrinal prescriptions and certitude of its European past”.

The book is divided into three parts straddling seven chapters.

The first chapter, “Of Faith in Equality”, introduces the theme and explains how ‘“[m]odern India’... has come to stand in for an interminable struggle with history” — the struggle to formulate “despite the violence of its antiquity, an ethics of justice for the present”. It is a struggle to affirm, in spite of the exclusions of its modernity, a belief in democracy which is still to come.

Part I, titled “Beginnings: Elements of a Critique of Force” delineates in the two chapters which follow the early anticipations of “Ambedkar and Gandhi’s shared interest in the category of force”. For Gandhi, the “category of force” was crucial to the conceptualization of satyagraha as well. Satyagraha was founded not “simply on disobedience of a passive kind... but on the force of ‘active’ resistance”. The following chapter engages with Ambedkar’s critique of force from his early days in New York. A desire to think of force anew emerged in this period. Revisiting Indic texts to comprehend sovereignty and penology, Ambedkar came to conceptualize force “as that which lay at the source of all theologico-political articulations of tradition and authority”, where force becomes violence sanctioned by custom. The author elaborates how in essays such as “Why is Lawlessness Lawful?” Ambedkar further unpacks the oppressive alliance between religion and sovereignty. Perhaps this is the reason which leads to “[c]ustom being enforced by people far more effectively than law is by the state. This is because the compelling force of an organized people is far greater than law is by the state”. Following Ambedkar’s moral ontology on its own terms, the author discusses the act of burning of the Manusmriti under his leadership (1927) as an act of “forcing” open the door of the “moral law behind which lay the freedom from juridical and cognitive servitude”.

In Part II, titled “Interwar: Sovereignties in Question”, the focus is on one of the most tumultuous times in the colonial period, marked not only by the strides made by the Independence movement but also by the upsurge of the exploited and oppressed. A significant output of this period is the publication of Harijan by Gandhi and the publication of Annihilation of Caste by Ambedkar.

“Apotheosis of the Unequal: Gandhi’s Harijan”, Chapter 4, examines “the sacrificial demands of Gandhi’s maryada dharma”, a term that condenses Gandhi’s conception “of social obligation within the disciplinary and punitive limits of moral law”. This chapter also brings forth how for Gandhi, varnadharma was not merely a ritual obligation of the few but “an egalitarian ontology of life”, a natural law which should be respected by everyone. For him the “vast organization of caste” answered the religious wants of the community as well as its political needs. The chapter exposes the rather contradictory approach of Gandhi towards caste where he “could not despise varnadharma without... marveling... [at] its juridical ethics of disarmament and... its potential to produce the conditions of mass nonviolence”. Chapter 5, titled “The Freedom of Others”, discusses the ethical and political demands mounted in Annihilation of Caste and focuses on the category of annihilation. It exposes the “genesis, endurance and ubiquity of social cruelty in India at the heart of the moral and political rules of her very struggle for freedom from colonial domination”. For an observer of this society, which calls itself largely nonviolent, it is a quandary to witness the legitimization and sanctification of violence, which is turned into public spectacle, and not seen as a moral crime. Ambedkar shows in this monograph our shared and collective indifference to the violence around us by talking about the “armed neutrality” of people. It may be a coincidence that this monograph appeared just a month after Gandhi had clarified in a brief essay the “sacred origins of the term Harijan”.

Part III, titled “Reconstitutions: Of Belief and Justice”, explores Gandhi’s moral ontology of action, as it feels the impact of the pressures of mass politics and the way in which it mediates the sacrificial ethics after his encounter with Annihilation of Caste. This section also tries to understand Ambedkar’s struggle to formulate the conditions of autonomy and justice within the broad framework of a classical religion. In this period Ambedkar brought out two theologico-political works, The Buddha and His Dhamma and “Buddha or Karl Marx”, which is supposed to be his last public presentation before his death.

The book is an important read for students of Ambedkar and Gandhi, because it questions the prevalent common-sense understanding of both. Here Gandhi is no mere practitioner of non-violence and a leader of the people, but a ‘theorist’. It also challenges the established perception that Ambedkar was a mere constitutionalist, or a “theorist of social citizenship for the marginalized and oppressed”. The author argues that he “was a thinker of freedom in the most classical sense of the term”. In an interview he even goes further to say that Ambedkar was a “constitutionalist only because he [was] a revolutionary”.

As important is the way the author underlines a concern for majoritarianism in both Gandhi and Ambedkar. Gandhi makes explicit his concern for what is called the “Tyranny of Majority” in Hind Swaraj, where he says that the minority proves right in the long run. His final epic battle against majoritarian forces where he openly declared that he is ‘Muslim parast (partisan towards) in India and Hindu parast in Pakistan’ during the stormy days of Partition, was a reiteration of this spirit.

Ambedkar talks of two majorities — political majority and communal majority. His caution against democracy’s majoritarian and fascist impulses is well known: “There is a great need of some one with sufficient courage to tell Indians: Beware of Parliamentary Democracy, it is not the best product as it appears to be.” Ambedkar’s caution in November 1948 as he introduced the draft Constitution to the Constituent Assembly is equally well known.“It is for the majority to realise that its duty is not to discriminate against minorities. Whether minorities will continue or will vanish must depend upon this habit of the majority.”

In a society marked by social prejudices, violence and indifference, it is important to emphasize that the greatest threat to democracy comes not from alien invaders but the very majority that is integrated into democracy, which thinks that strength of numbers gives us the unimpeachable right to be right.

More shades than one: The multitudinous life of V.K Krishna Menon