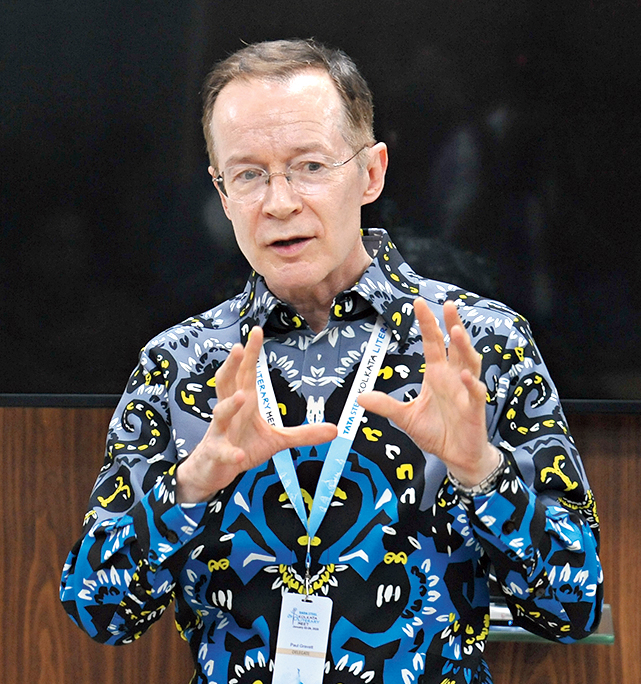 The words ‘manga’ and ‘literary meet’ are usually never uttered in the same sentence and that is exactly what piqued my curiosity when I got a chance to attend a session solely dedicated to manga at the Tata Steel Kolkata Literary Meet in association with The Telegraph and Victoria Memorial Hall on January 26. Manga Mania saw Paul Gravett, London-based curator, critic and lecturer specialising in international comics and author of many books, in conversation with Pinaki De, an award-winning graphic illustrator. Excerpts from the session:

“Discovering manga (for me) was very special. Because even without the words, without knowing the language, the visual design is so strong that instead of retreating, you’re drawn more into the story. And I was also stunned by the fact that an average manga is easily 200-300 pages and comes out every week or every month,” explained Paul, who stumbled upon Manga at a Japanese bookshop near his home back in London.

According to Paul, the success of manga in capturing the public’s interest is through its constant attempts to draw parallels between their lives and ancient Japanese civilisation. “Manga is diverse and everyone can find something for themselves. There is manga for everybody in Japan, ranging from primary children’s nursery comics right through stories for people who are little older — people in their 50s, 60s and 70s, called Silver Manga. And then, of course, there are entire genres that people don’t know in the West, like golf. Who would have thought there’d be comics on golf?!” added Paul.

“Manga became a popular form of escapism in post-war Japan,” Paul replied when asked about why and how Japan became the birthplace of manga. “After World War II, Japan was physically and emotionally distressed. It was rebuilding itself and was finding strength to go on and there was need for hope, there was need for escapism and that’s when manga came in and helped the youth in a big way,” he said.

THE GODFATHER OF MANGA

There’s no way one can talk about manga and not mention Osamu Tezuka. “Tezuka’s vision of manga was very different and in hindsight, very important for the craft. His stories spanned many, many pages, thus setting the tone of manga in general. American and European comics can be considered too short by manga standards — we have 64 pages for Tintin, 48 for Asterix, 20 in a Batman comic or little newspaper strips of short comic in The Beano or Dennis the Menace — they are very short. But Tezuka, early on in 1947, was making 200-page stories, single-volume complete stories, thus giving us the foundation of a finite, complete graphic novel. In manga, that is what we call a story — a manga where story was primary and it was taking the time to flesh out characters and the story,” said Paul. And that primarily became the fundamental difference between the comics of the East and the West — the space and time used to flesh out characters and stories.

According to Paul, another factor that helped manga succeed and achieve the popularity that it has achieved now is that it grew up with the readers. “The breakthrough really took place in the 50s when a new form of manga broke away from Tezuka’s school of manga. This was Gekiga, coined by Yoshihiro Tatsumi, who is also referred to as the father of that school. Made up of two separate words geki and ga, it literally means “dramatic pictures” in Japanese. Tatsumi wanted to tell tougher stories, wanted to develop a new form of manga and address a different audience,” he added. Gekiga offered stories that were darker and dealt with subjects like death and violence.