Bidyasundar: Stories a romance can tell

Bidyasundar acted as a barometer of literary taste and fashion, and continued to divide opinions well into the 20th century 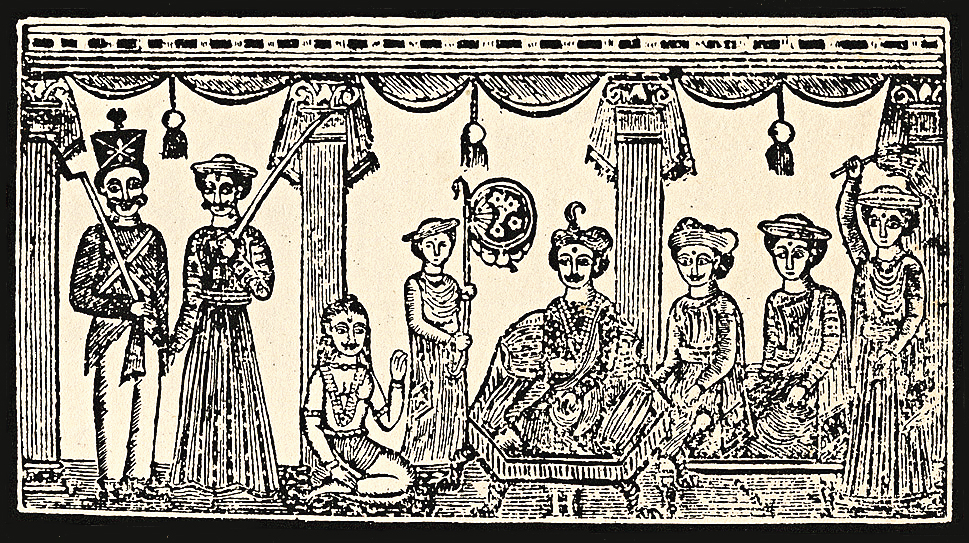 The world of Bidyasundar, a courtly romance authored by Bharat Chandra Roy in the mid-18th century, may appear distant to us now. But for much of the 19th century, it was the staple of the Bengali printing industry, enjoying a remarkably long innings first in manuscript, then in print, then on stage, and finally in literary histories. Like no other work of its time, Bidyasundar acted as a barometer of literary taste and fashion, and continued to divide opinions well into the 20th century.

Since the advent of book history as a discipline, and earlier, there has been no dearth of accounts about the book trade in Bengal. Yet none of those accounts attempted to tell the story of printing in colonial Bengal through the lens of a single text. Tapti Roy has done precisely that in her book on Bidyasundar, and the result is possibly the most comprehensive account of Bengali-language printing in 19th-century Calcutta.

Roy’s first chapter recounts the story of the lovers, Bidya and Sundar, and its place within the textual triptych of Annadamangal, Bidyasundar, and Man Singh, completed in 1752. Bharat Chandra wrote the work at the instance of his liege, Raja Krishna Chandra Roy of Nadia, and based it on the Chandimangal of the legendary ‘Kabikankan’ Mukundaram Chakravarty. None of the manuscripts from the time of the composition of the poem survive, although two from 1784-5 have survived in Paris and Calcutta. Thus there is a degree of uncertainty about the exact route of textual transmission from manuscript to print.

But perhaps more than Bharat Chandra, it is the figure of Gangakishore Bhattacharya which looms large in the journey of Bidyasundar. Gangakishore, about whom frustratingly little is known, was the first Bengali entrepreneur of print. Having learnt his craft at the Mission Press in Serampore, he moved to Calcutta and started working at Paul Ferris’s press on 9, Bowbazar Street. It was from this press that Gangakishore issued Annadamangal and Bidyasundar in 1816, at a price of four rupees. It was also the first-ever Bengali printed book to contain illustrations, produced from both wood and metal blocks and engraved by Ramchand Roy.

No copy of this milestone in Bengali printing is known to be extant but the 1823 edition is held at the British Library and can even be downloaded in full. This was published by Harachandra Roy, a former partner of Gangakishore, and had a batch of new pictures. As the oldest surviving printed version of Annadamangal, its significance is immense. Its title page, layout and other textual protocols were all to be key influences on the nascent world of Bengali printing. The success of the work led to a number of editions issued by other publishers over the next two decades, all of which Tapti Roy details unerringly. The only edition which seems to be missing is that of 1828, issued by Pitambar Sen’s Dinabandhu Press along with Mathura Mohan Mitra’s Nutan Press. At least three engravers seem to have cut blocks for this edition.

But it was with the 1847 edition that Bidyasundar found itself squarely at the heart of the Battala book trade. Much of the second chapter pays close attention to the correlation between page numbers, print run and prices, not just of Bidyasundar but much of what was then in circulation. In the meantime, Bidyasundar had also begun to be performed on the stage, making it even more of a household name. However, the prose dramatic version of the poem, written by Jyotindramohan Tagore in 1858, saw the beginnings of the sanitization of the romance, with the “essential mood (rasa) of beauty and love (sringara) largely compromised”.

The most sustained criticism of Bidyasundar came from missionary circles, with the Reverend James Long — the first bibliographer of Bengali print — unable to mask his unease about the work in spite of its obvious merits. More worryingly, it was getting into the hands of women readers, sometimes via female hawkers who had access to the anthahpur or women’s quarters. This led to much hand-wringing in reformist and bhadralok circles, and societies of polite letters such as the Vernacular Literature Society were set up to provide more ‘wholesome’ fare. As the anti-obscenity movement gathered pace, Bidyasundar found itself at the heart of the turmoil. Roy charts the fluctuating fortunes of the work with precision, distilling the major literary debates of the day and teasing out the strands of intertextuality with other genres of writing, such as Perso-Arabic tales or Vaisnav poetry.

In the last section of the book, Roy turns her attention to 20th-century reappraisals of not just the romance but of Bharat Chandra the poet. Here the figure of the auteur rather than the text is constructed, as is common in mainstream literary studies. Roy reports on such contrary evaluations as Pramatha Chaudhuri’s and Dinesh Chandra Sen’s, with ashleelata/obscenity and decadence still persisting as points of debate. In her conclusion, Roy states that the experience of Bidyasundar “challenges conventional retelling of book history in Bengal”, and refers to Gautam Bhadra’s restructuring of static Battala categories in his classic Nera Battolai Jai Kaw’bar.

It seems to me that this question has been more than adequately settled over the last decade, and the value of Roy’s work goes well beyond unsettling Battala orthodoxies. By focusing on the life of a single text, it has shown a new path for the history of the Bengali book to follow.

Print And Publishing In Colonial Bengal: The Journey Of Bidyasundar