The Skull of Alum Bheg 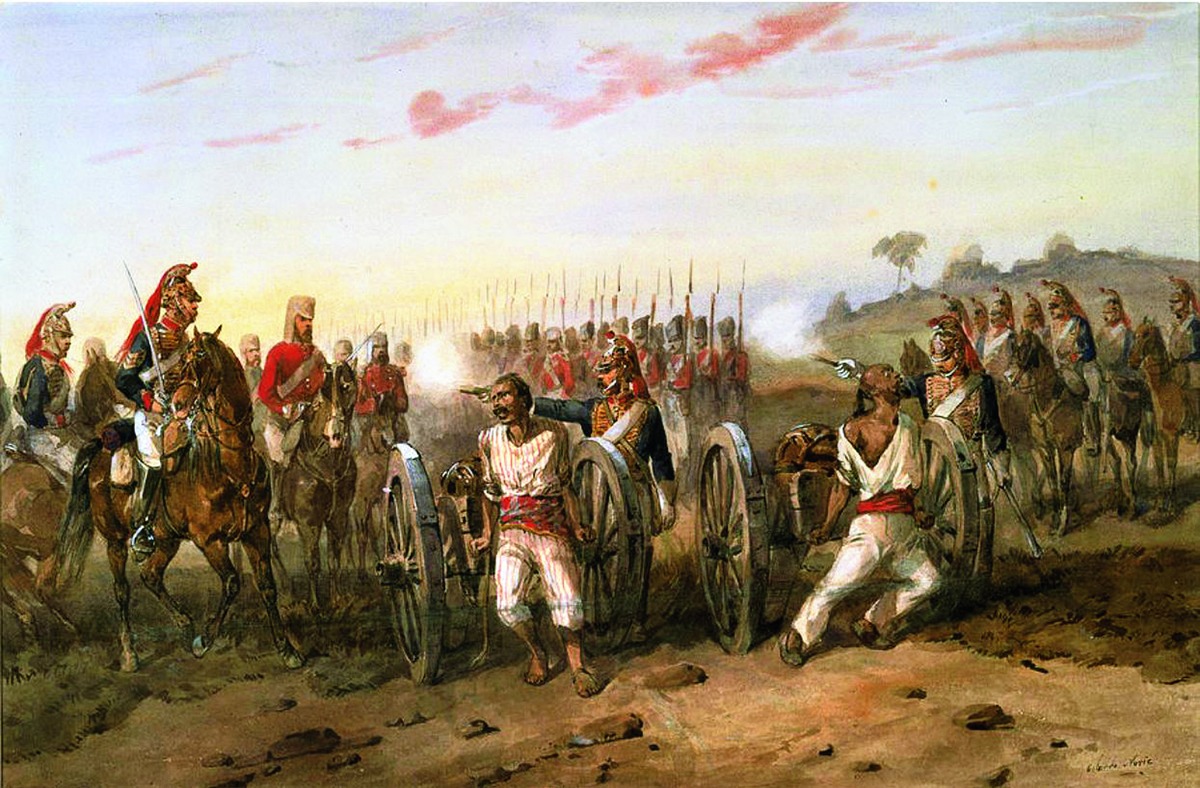 The historian, Kim A. Wagner, probably never expected that he would be standing at a train station in Essex one day in 2014 carrying in his bag the skull of a rebel from the Indian Uprising of 1857. The skull was discovered mysteriously at The Lord Clyde, a pub in Walmer, Kent, in 1963. It was displayed as a mascot for several years before being forgotten once again until its last "owners" drew Wagner's attention to it.

A parchment tucked into the right eye-socket of the sepia-hued relic, claimed it to be the "skull of Havildar 'Alum Bheg'" of the 46th Regiment Bengal Native Infantry, "a principal leader in the mutiny". Alum Bheg was alleged to have murdered four residents of Sialkot: Dr Graham, Thomas and Jane Hunter and their child, a charge Wagner contests in his book. The mystery of the skull had to be solved - who was Alum Bheg? How did the skull travel all the way to a pub in Kent?

Alum Bheg (or Alim Beg), however, was not to be found in original historical records. The physical presence of his skull contrasts sharply with his archival absence, which denies Alum Bheg a personal narrative. The absence enabled Wagner to use it as a jumping-board to tell the story of "thousands of Indian soldiers" like Alum Bheg, who revolted in 1857.

In a gripping start to the book, Wagner interweaves fictional and non-fiction accounts (Rudyard Kipling on the one hand, John Youngson and Andrew Gordon on the other) to set the stage for the Uprising. Standing in for many like him, yet never fully exempt from speculation, Alum Bheg appears as a phantom figure throughout the narrative. The strategy of personifying pays off.

Wagner's painstaking research into the relatively under-explored Sialkot chapter of the Uprising points to the messiness of historical events and interpersonal relationships that are often given a smoother texture when narrativized. Even though the book sets out to tell the story of a "subaltern", it inevitably veers towards colonial historical records, saying as much about the British, as it does about the rebels. Of course, the author is not to blame for the inherent bias in the extant archives. Personally, however, I was much more interested in the sections where Wagner indulges in imaginative reconstructions or offers his political analysis of the meaning the skull held in 1857 and its significance today as a symbol of "ultimate colonial power" - and dehumanization.

Some of the most poignant bits are reserved for the last. Chapter 10 talks about the colonial method of punishing by blowing from a cannon, which sought to perpetrate violence beyond death, denying the possibility of acceptable funeral rites. Chapter 11 offers a survey of British campaigns around the world (Sudan, South Africa, India) where skulls were similarly fetishized and collected as markers of colonial supremacy. All this was, of course, legitimized because they were on a "civilizing mission".

In the Preface, Wagner seems eager to distance himself from writers who write to contribute to either side of the "balance-sheet of Empire", that is to say, apologists for colonization or "mindless empire-bashing". While mindless views are undesirable (from historians or otherwise), one could take issue with his description of a "critique of the Empire" as being "about as meaningful as yelling at the television". That said, The Skull of Alum Bheg is written in an accessible manner and constitutes a valuable addition to the existing body of scholarship on 1857 (Wagner mentions the work of Eric Stokes, Tapti Roy, Rudrangshu Mukherjee and Ranajit Guha), and the subtitle's "nod to Gautam Bhadra's classic essay" is appreciable.