Bangabandhu’s brightest colleague recalls the country of their dreams

Sobhan gracefully acknowledges, and even passionately propagates, the economic and human development achievements of his country but deplores the aggravated inequality that drives the miracle 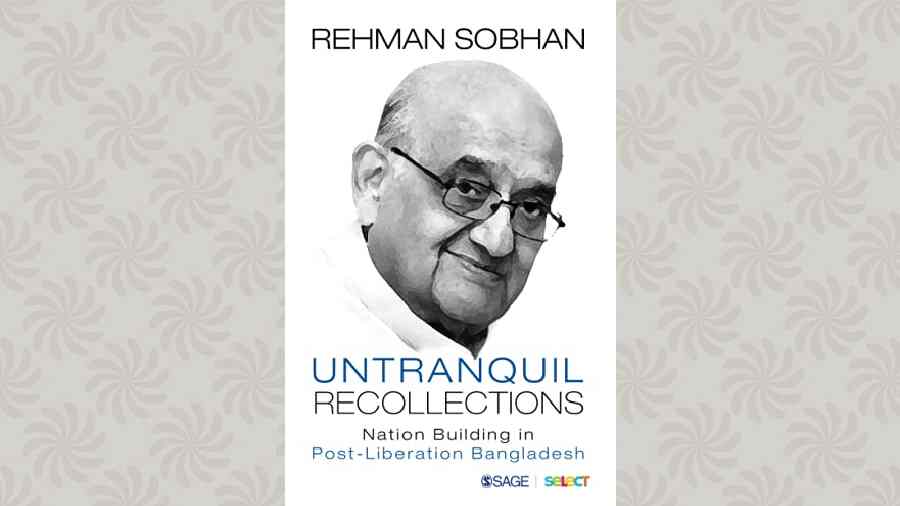 It would require a Greek tragedian of the order of Aeschylus or Sophocles to do justice to a review of the second volume of Rehman Sobhan’s “Untranquil Recollections” subtitled Nation Building in post-Liberation Bangladesh. For the crux of the story is less the building of the new nation than its tragic dismantlement within a thousand days (December 1971-August 1975) of the dreams of its founder, Sheikh Mujibur Rehman, and his closest colleagues, among whom Rehman Sobhan was certainly of the best and the brightest.

Rehman Sobhan, scion of an aristocratic Murshidabad family, first stepped on Dhaka’s soil at the age of 21, his education having taken him from St Paul’s in Darjeeling to Cambridge in England. He spoke English and some Urdu but little Bangla. He seemed destined for the cloisters of academia. But seeing the awful discrimination to which his part of his country and its people were being subjected – a post-colonial version of colonial exploitation - he soon became a political activist aligned to the Awami League and an admirer of its leader, Bangabandhu. Within 14 years of his arrival in the capital of East Pakistan, he emerged as a freedom fighter and confidante of the Sheikh, “a part of the historical process” and, therefore, a target of the Pakistan army’s wrath “on charges of high treason”. He miraculously escaped the merciless crackdown that started on 25 March 1971 and went on to become the Awami League’s “Envoy Extraordinaire” in the western world, scraping a bare existence largely thanks to sympathetic friends, advocating the Bangladesh cause to deaf officials but a keenly attentive media and the general public, thus contributing to driving a wedge between media/public opinion and Government thinking in Europe and the US.

Within nine months, Sobhan’s wildest hope was realized. Bangladesh was born on 16 December; he himself landed in Dhaka on an Indian Air Force Dakota on the 31st and Bangabandhu followed a few days later. Within two days of Mujib’s arrival in Dhaka, Rehman Sobhan was invited to become a member of the Planning Commission. He was all of 35. The opportunity of a lifetime was his.

He went to his tasks with enthusiasm and zeal, aiming at providing the economic scaffolding of a new nation dedicated to the social equality and justice that was the Bangabandhu’s overarching objective and unflinching goal. The immediate priority was putting back on its feet “a war-devastated nation with limited resources, populated by some of the most deprived people on the face of the earth”. The country was faced with “the overnight flight of the non-Bengali bourgeoisie”, placing 44% of the non-agricultural economy in State hands. His three principal colleagues in the Planning Commission were all close personal friends who shared his broad socialist perspective and zest for completing their duties at breakneck speed. The technical work was thus finished within a year with the publication of the new nation’s First Five-Year Plan. They withstood the sneering of Henry Kissinger that Bangladesh was a “basket case” and, showing this was not so, negotiated a billion dollars of external resources “without succumbing to the policy dictates” of others, and laying the foundations of “a more balanced economic relationship with India”.

The larger aim was the establishment of an “egalitarian society… free of exploitation and driven by a commitment to social justice”. For Mujib, recalls Sobhan, “socialism served as a metaphor for a more just society.” Mujib was “determined to repudiate the values and inherited behavioural patterns of our (erstwhile) rulers in order to construct a more just society”.

The rhetoric was persuasive and moved the masses. However, Rehman Sobhan and his colleagues soon found that when it came to specifics, there was a wall of political resistance that could only be vaulted with the Bangabandhu’s backing. “On our own, the four professors were powerless…Decision-making largely depended on persuading the PM to support the issue under discussion”. But wary politician that he was, the Prime Minister’s backing remained uncertain: he would often back off, or hesitate, or procrastinate, or bring in changes to accommodate the contrary viewpoint of his principal political associates. Rehman Sobhan discovered to his disappointment, even disillusionment, that however clear and unambiguous the Leader was in his public statements, pressures within would lead him to temporize. Much of the narration is taken up with bold initiatives proposed by the Planning Commission leading to “areas of contestation” that “needed to be navigated”, yet ultimately getting wrecked on the rocks of civil service cussedness or the baleful influence of vested interests.

Fed up with the reluctance of the vested interests, old and aspiring, to do away with venality, patronage, corruption, nepotism, and jobbery, Sheikh Mujibur Rahman decided to do away with democracy itself by proclaiming a one-party state to carry through BAKSAL, a programme of radical political, administrative, economic and social reform, a “last-ditch effort to transcend the contradictions within his support base”, beginning with Sobhan’s sine qua non for agricultural reform as the necessary first step towards a more egalitarian order. But unable to stomach this leap away from democracy, Rehman Sobhan and his Planning Commission colleagues drifted away - albeit in the face of the Sheikh’s unwillingness to let them go. Sobhan himself went to head the Bangladesh Institute of Development Studies.

The chaos into which the new nation descended in the fourth year of its creation provided the irresistible opportunity for the Bangladesh army, trained almost to a man in Pakistan’s military academies, to seize political power. Bangabandhu and almost all members of his family were brutally gunned down in their home and Bangladesh entered a 15-year period of what Sobhan calls “cantonment rule”. For Rahman Sobhan, this meant another extended period of external exile. He was just under 40 with more than half his life ahead of him.

Forty-five years after Mujib’s assassination, his daughter, Hasina, has proved more politically agile than her late father and has in practice distanced herself from the Bangabandhu’s politico-economic vision. She has proved an extraordinary success, presiding over an economic policy that is the ideological opposite of all her father aimed for but converting the “basket case” into an economic wonder that scores not only on the economic development scale but, more stunningly, on the human development scale too. Sobhan attributes this to “the emergence of new social forces which were not visible half a century ago”. These new social forces have “unleashed unimaginable entrepreneurial dynamism” and “development possibilities which did not exist in our time.” Yet, they have also “set Bangladesh on the path to an unbridled crony capitalist society”. This has pushed Sobhan into inner exile, well out of the corridors of power he trudged through at the start of independence, out of tune with the times.

Nevertheless, he remains an important public voice, a source of immense strength to civil society and the intelligentsia as his nation wheels into the second half-century of independence. He gracefully acknowledges, and even passionately propagates, the economic and human development achievements of his country but deplores the aggravated inequality that drives the miracle. “Over the years,” he observes, “contemporary political contradictions have sharpened and levels of tolerance have deteriorated”. From his ideological convictions that date back to the halcyon days of the early Mujib era, and on whose essential validity he refuses to compromise, he sadly regrets the murky moral morass into which market capitalism has landed his beloved land. Bangladesh, he concludes, has “evolved as a contradiction to Bangabandhu’s vision for society.” Alas, every revolution devours its children.