Advertisement
Home / Culture / Books / Apurva Purohit tells women about the toils of reaching the top of one’s career, through her books

Apurva Purohit tells women about the toils of reaching the top of one’s career, through her books 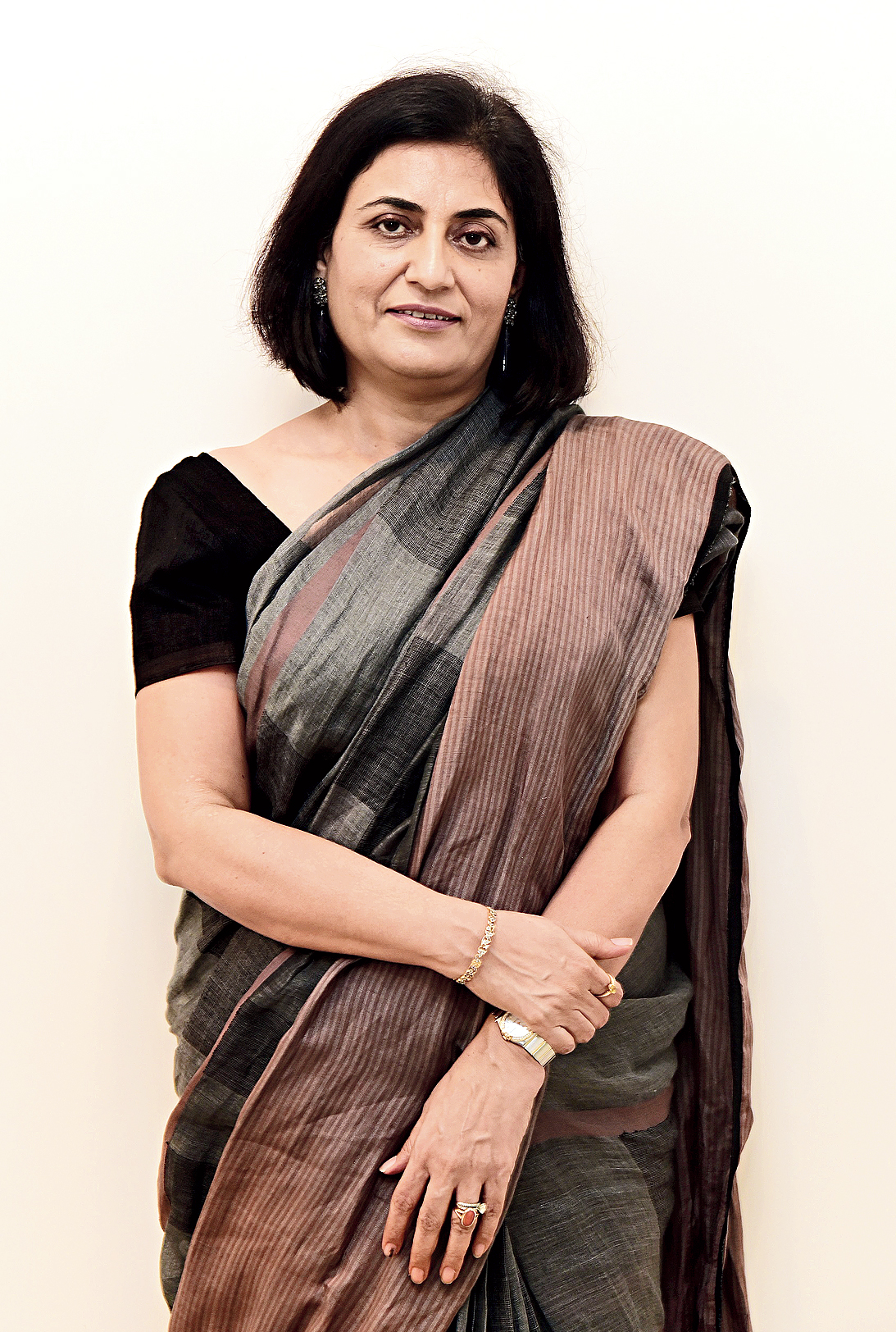 Apurva Purohit is the president of the Jagran Prakashan group and when she is not managing the entire mandate for multiple media houses, she strives to help women reach the pinnacle of their career. She also doubles up as an author of two books: Lady, You’re not a Man — the Adventures of a Woman at Work (2013) and now Lady, You’re The Boss. We doubt there could have been anyone else who would have done greater justice to the topics she has addressed in her books. While she was on a whirlwind promotional tour to launch her book, t2 caught up with this businesswoman at Oxford Bookstore for a quick cup of tea and inspirational 30 minutes. Excerpts...

How did the books come to be?

I have been running media organisations for the past 30 years of my life. While I enjoyed all of that but I kept coming across a lot of energetic, exciting, skilled, talented women who I would recruit in my organisations but within the first 10 years of their career, they would quit and go. That really bothered me a lot and I tried to figure out what it was, and chanced upon a set of challenges that was making them leave. Therefore, the numbers of diversity are so poor, in the sense that there are 30 per cent women at an entry-level position, 15 per cent in the mid level and five per cent in the top level. Everyone is talking about the glass ceiling but for me it’s not so much about the ceiling and is more instead about a leaky pipeline. So as an added part of my job, with a desire to make a difference, I started focusing on talking to a lot of women. So both the books that I have written come from the sphere of me saying, “If I was able to do it, why can’t you? What are the challenges? Let me figure it out and help you with solutions”.

There is such a dearth of women in top roles who can serve as role models to younger girls. I get called very often to organisations to speak to women. And I realised the futility of these one-on-one conversations, especially because the problems are ailing thousands and thousands of women. Which is when the idea of providing a textbook solution was born.

The previous book was for a younger audience and this one is for a more mature audience. How did that come to be?

The biggest seepage was happening at the bottom of the pyramid and that’s why I wrote the first book. After the first 10 years is when responsibilities like getting married, having children and the guilt of leaving a crying baby at home, start gnawing at women. The first book was intended for them to tell them that you can do three things to overcome these hurdles. First is to accept that being a woman comes with its own set of challenges. A lot of women get frustrated thinking why should she be the nurturer at home as well as the hunter outside while her husband watches TV after coming home from work. Adapt, and ask for help, which is something a lot of us don’t do. You don’t have to be the multitasker that everyone supposedly looks up to. Asking for help is the best thing one can do for their well-being. Thirdly, one must celebrate their success. A lot of women are far more tentative than they ought to be. So my first book was all about this and I thought I had done my job.

However, six-seven years had passed since the last book and the women who’d chosen to stay back on their chosen career path were facing a new set of challenges in mid and top management levels. This was something I hadn’t anticipated. And these challenges are more difficult to overcome because they were way more subconscious and devious in nature, I realised. Here was a career woman who’d battled the odds to reach where she is and yet she is riddled. Even the 15 per cent who stay till middle management face a two-third of dropouts because only five per cent reach the top. Talking to women in such situations gave birth to the second book which also addresses concerns in two parts — after fighting for 10-15 years, what is it that’s causing you to drop out and even if you don’t leave, what is it that’s stopping you from striving to reach the top? I discovered things like the imposter syndrome which makes women believe that they are just lucky to be where they are or that they don’t deserve what they got. I even heard things like, ‘I spent 20 years of my life fighting, I don’t want to any more’. Also, the fact that women love to feel needed. The fact that they are in a cushy, comfortable job where everybody knows and loves them, deters them for pushing for the next. Those are the concerns of women’s life, hence the second book.

While your first book is a way to fight social constructs deterrent to growth, the second book is a more inward retrospection. In that respect, do you feel both address the feminist agenda?

Both my books look at it from a very balanced perspective. In this whole diversity and gender agenda, there are three parties — the man, the woman and society or an organisation in this case. I think every party has to put their foot forward in order for this to succeed. My first book spoke to women and I said that you can’t change the world, but can we change things about ourselves? This whole unfairness and the ‘suffering Sita’ syndrome had to be corrected. The first book is different because it was far more prescriptive with very precise solutions. The second book is far more reflective. I hold up a mirror and tell them, this is the problem and this is how I dealt with it. Now you figure out your way.

As an author, did you ever fear that you would be alienating 50 per cent of your audience with a book name that begins with ‘Lady’?

That’s such a perspicuous question because no one really asks me this but you are so right! The second part of the second book is all about leadership and points to assert leadership. A lot of my friends who’ve read the draft have said that these takeaways would benefit anybody in a similar predicament and not just women. But I never set out to be an author, I did this because I wanted to make a difference to women. For the sake of greater book sales, I couldn’t sacrifice the core of the book, which is addressing women. So if men are reading the leadership section and loving it, it’s just an added blessing.

There’s been a large gap between your two books. Have you noticed any difference in publishing?

I was writing a blog before I wrote the first book six years back. Rupa (Publications) did my first book because they liked my style of writing and it was an easy process. They thought it was a unique voice — witty, funny and anecdotal. The book did extremely well and sold some 75,000 copies and it still continues to be on Amazon’s bestseller list. The second book was easier than that because people were really keen. Publishing is extremely difficult. Everyday there are books getting released but I was pleasantly surprised the second time while working with Westland Books. The way things have changed is the power of digital. They made two short videos — one from my talk in a school and another really short teaser for the book. The way people responded to those videos from various parts of the world — Canada, Nigeria. The videos were getting shared on WhatsApp groups like Dentists’ group, Harley Davidson Bikers’ group, Goldman Sach’s employee group and what not! It just goes to show if something is relatable, people will share.

With ‘feminist conversations’ coming into mainstream, do you feel that there is overcrowding of this genre?

There are conversations happening and it’s good that they are. There is a book by Caroline Criado Perez (Invisible Women: Data Bias in a World Designed for Men) that talks about how the world is designed for men. Right from the shirts and their buttons, to fire vests, to the size of the iPhone. I am glad that women are speaking up because I keep telling women, unless your voices are heard, how will your opinion matter? However, I haven’t seen too many books in this space. There are no in-depth conversations happening, they are all limited to 120-word tweets!

Has the writing bug caught you? What next?

I didn’t even plan on writing the second book (laughs). As of now, no, I don’t have another book planned. I have a full-time job and I am hoping that the message from the books is heard by women everywhere. I am stopping at that.