The Unravelling of MGNREGA is recommended to academics interested in MGNREGA. However, the lay reader may find it challenging because of the flawed packaging 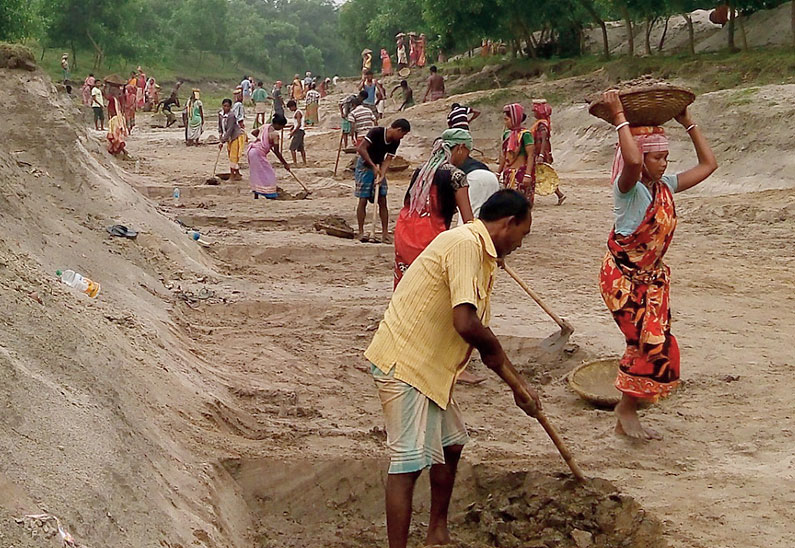 MGNREGA is the most important poverty alleviation scheme currently in action as it covers every district of the country
The Telegraph file picture
Siddhartha Mitra   |   Published 31.05.19, 07:13 AM

The Unravelling of MGNREGA makes an important contribution to the analysis of the performance of the Mahatma Gandhi National Rural Employment Guarantee Scheme that was launched in 2006, following the passage of an Act in Parliament. It is based on a study of the six states mentioned in the title, which are characterised by a high incidence of poverty, but marked apart by differences in terrain, culture and other variables.

MGNREGS is the most important poverty alleviation scheme currently in action as it covers every district of the country. It guarantees 100 days of unskilled manual labour at statutory minimum wage to every rural adult in the country on demand. This scheme, ostensibly, manages to target only the poor as they are the only ones expected to offer to work for the low wages mentioned.

Although the book seems hastily put together and the survey underlying it oversamples scheduled castes and scheduled tribes, a reader who perseveres can still manage to enhance her knowledge about the design and efficacy of MGNREGS. The exhaustive, but meandering, review of literature on the subject offers much scope for transferring knowledge to a careful reader.

There seem to be some basic problems with the narrative of the book such as poor grammar and repetition of matter. But there is also much to like: the lack of political bias; the highlighting of the need to generate awareness about MGNREGS among both administrators and potential beneficiaries; the drawing of the reader’s attention to the complicated structure used in the implementation of MGNREGS, which leaves much scope for opaqueness and thus corruption and other leakages. The volume also reveals large scale irregularities in payments for work to hired labour, with only a small portion of the workers getting regular payments.

The authors underline some of the benefits of the MGNREGS: alleviation of rural poverty and boost to employment; the positive impact on the institution of the Panchayati Raj associated with the implementation of MGNREGS and so on. However, one should not get carried away by the nature and scale of these benefits: there seems to be a conceptual muddle in assessing the value added by this scheme which can be explained as follows.

Given the massive expenditure, there are, not unexpectedly, some benefits in the form of significant poverty alleviation and employment generation. What is not known is whether the net benefits are greater in magnitude than those that would have accrued from investing in an alternative, say cash transfers or ‘education and health insurance vouchers for the poor’. It is possible that the second set of schemes would have generated greater net benefits as their simpler implementation might have been associated with lower costs of implementation as well as would have provided less scope for corruption and leakages.

Also revealed are findings of studies which point to the poor quality and durability of the work created by the MGNREGS, probably because the share of unskilled labour in the total expenditure on the scheme is fixed at a very high level. The lack of significant and lasting increase in ‘physical capital or infrastructure’ and in human capital implies that much of the poverty alleviation brought about by this scheme is potentially of a temporary nature with permanence conditional on the scale of real expenditure on the scheme being held fixed at a significantly high level over a long period of time. It is thus arguably a poor substitute for any scheme which generates more human capital through investments in child nutrition, education and health by the government and therefore greater certainty with regard to permanent poverty alleviation.

In spite of its poor presentation, I would recommend this book to academics interested in the MGNREGS. The educated layman may, however, find the book quite trying because of the flawed packaging. The authors could come out with a more reader-friendly version of the book to enhance readership and knowledge generation. Future attempts to conduct such a study should also ensure that the sample is more representative of the targeted population.

Thomas Hardy: Relevant through the ages