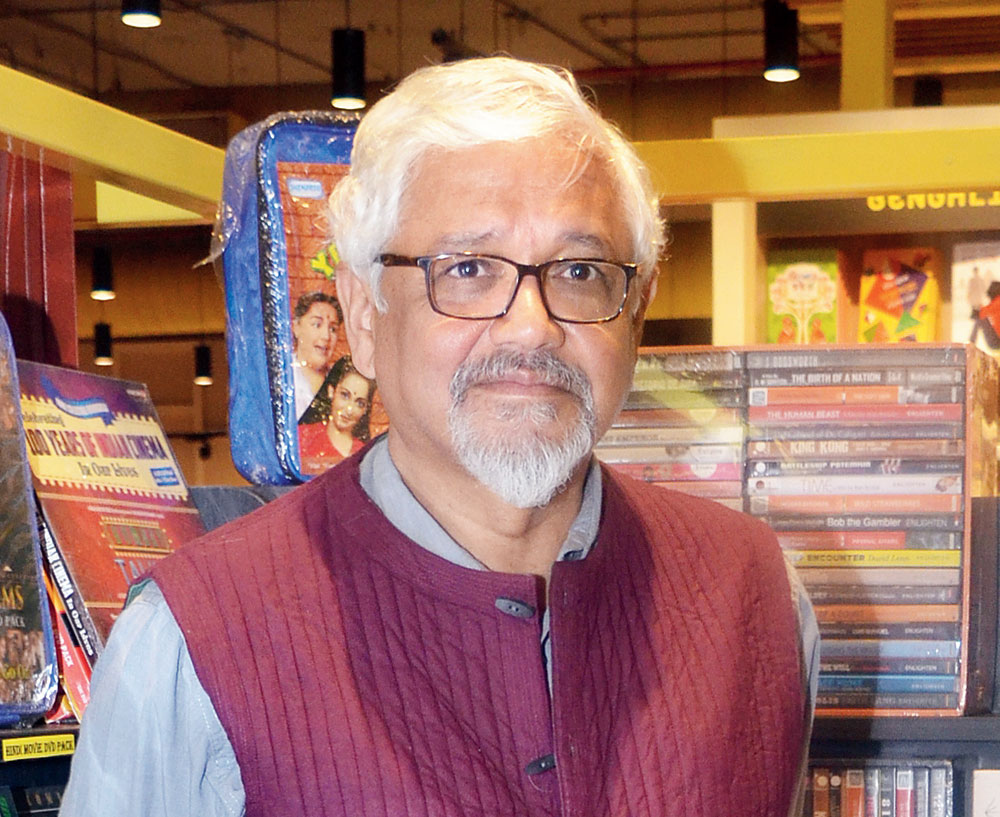 The release of Gun Island, the new book by Amitav Ghosh, is still about five months away, but curiosity about it is already running high. His first work of fiction after The Ibis Trilogy, the last of which, Floods of Fire, was published in 2015, the novel follows rare book dealer Deen Datta in his extraordinary journey of discovery across the world. The author, who was in town to sign books for his fans at Starmark in South City Mall on January 11, opened up — a little — to The Telegraph about his new novel, and also shared his thoughts about the impact of technology on books, and the subject closest to his heart — climate change.

Geographical space is almost like a separate character in most of your books. Is that a conscious choice?

Not really, it’s just turned out to be that way. I think what you are calling geographical space, I would call ‘the world’, the exterior as it were. It certainly is very much an aspect of my writing — the world, everything that is outside us, the landscape. For me, noticing what is around us is something very important. And I think that is one of the ways a lot of my work is different from that of my contemporaries’, because a lot of their writing is about what happens in people’s heads whereas, for me, what is happening around us is no less important than that.

What kind of research did you put into Gun Island?

I did my usual kind of research, I have an obsession with words, so that played a huge part of Gun Island (to be published by Hamish Hamilton) There is also the sort of research that went into The Great Derangement but the key to the mystery is Gun Island itself, which I can’t give away to you (laughs)!

How do you separate the politics from the facts from historical accounts when you research?

That’s an interesting question. I don’t think you can divide the politics from the writing. For example, in the Opium Wars, you cannot really divide the economics of opium from British imperial ambitions, from the British empire’s shape in the world. They are profoundly interconnected and it’s not possible to divorce them. Really, at the end of the day, the way people experience their own emotional and inner states is so much tied to all of this. So, the important and exciting thing for me when I write about a historical moment is trying to inhabit that moment, to try and see what it’s like to be there, what are the emotions that people experience and, in that sense, it is especially challenging to write about war because war is a moment of extremity. So to try and imagine that is an enormous challenge but enormously rewarding also.

You have spoken about not wanting your fiction to be didactic. But do you not believe that, as creators of art, it is imperative to be responsible?

The way that I would approach it is to say that any writer who is doing their job properly is doing the work of noticing. It is in noticing that the world enters your work, but if a writer sets out to teach a lesson, I don’t know if that necessarily works very well. I just read a study on the impact of climate on fiction and it was really negligible. Basically, it reinforces what people already think. As a writer, I know I can’t flatter myself into believing that it makes a huge difference. But I do have to say that when you do the work of noticing, it can make a difference because when The Hungry Tide came out, people weren’t talking about the Sunderbans the same way. And that really changed a lot because, I think, people need something that allows them to imagine a place and I think that has been happening. For me, that is a very gratifying aspect of my literary career.

You have spoken about the collective effort needed to make an impact on climate change. But should we totally discount individual efforts?

I don’t think one should discount individual efforts, and certainly it is an important thing. If somebody feels they should do it, there’s certainly a point to it. But at a macro level, individual efforts will make very little difference, we know that. Compared to what is needed, how you change your light bulb is not going to make much difference. Often, individual efforts have the wrong effect. “Well, I have changed this bulb so I can put in two bulbs.” In the end, these have to be policy decisions, we can’t all individually set out to remake the planet.

How does it feel to be living in a country where the president does not believe in the cause that is so close to your heart?

It’s true that I live there, but I am an Indian citizen. It’s very disturbing, but it must also be said that even those who say they do believe in climate change, like Justin Trudeau and Barack Obama, don’t really do anything. Obama was recently boasting that the US had its highest level of fossil fuel under his administration. Look at the way Trudeau is taking away native American lands.

Being a traveller that you are, where do you feel most at home?

It’s hard to say actually (laughs), but I guess I would say I feel most at home where my family is.

How has the world of books changed due to technology in the last two decades?

As someone who makes his living from writing, I have to be very aware of these changes. At the same time my effort is to not let it interfere in the ways in which I write. So, say with Sea of Poppies and so on, it often strikes me that very soon people won’t have the basic skills to read very long books. I see that with my son’s and my daughter’s friends. They don’t read that way. Things are changing and they will change our landscape.

Do you have an audience in mind when you are writing?

Oh, that would be impossible for me as the audience is too spread out.

There hasn’t been a story about New York yet. Is there one in the offing?

Any recent books that pleasantly surprised you?

Ah! So many, I am constantly reading books that surprise me. I must say Richard Powers’ The Overstory was amazing!

Any favourite characters from your work?

There are many. Tridib (The Shadow Lines) is very special.

Who is that one author you keep revisiting?

One author that I keep revisiting is Herman Melville.