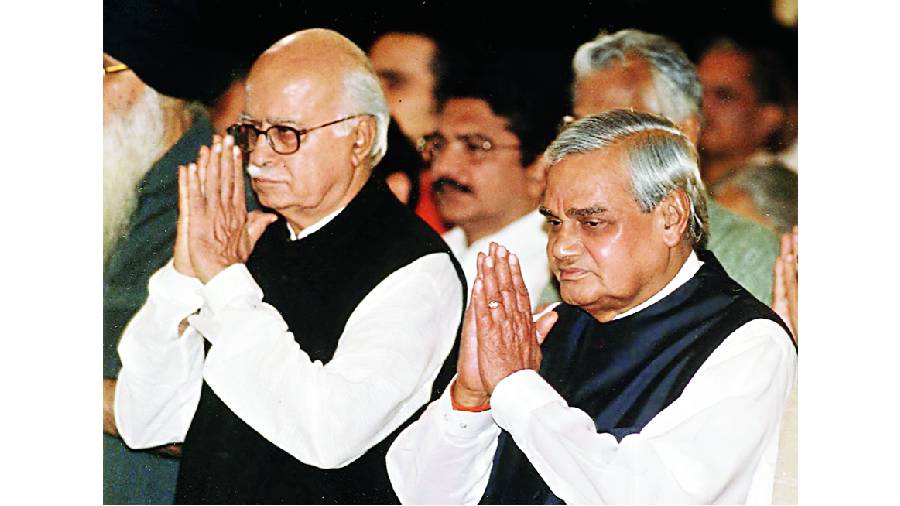 I had spent a year on the BJP beat when Atal Bihari Vajpayee and L.K. Advani would forge that extraordinary coalition called the National Democratic Alliance and come to power in Delhi in 1998. The old power elite was shaken, and I would frequently get calls asking how can you bear to cover them, they are so hateful, is it your choice to do this? I would grandly give the reply that George Mallory did when asked why he wanted to climb Mount Everest: ‘Because it is there.’

With its mobilizations, grand leaders, conflicting ambitions, ideological thrusts and geographical spread, the BJP is a fascinating party to cover. As the political editor of a news magazine, I would be packed off to deliver cover stories on the Congress too, but in comparison to the action-packed BJP, it was dull, a party fundamentally of gatekeepers to the dynasty. Trained to have access to both the prime minister and the deputy prime minister (Vajpayee and Advani), it was singularly annoying to discover how remote the Gandhis were and that a reporter was expected to make do with third-party interpretations of their will. Covering the BJP, conversely, seemed like watching history being made even if many of the events were disturbing.

Vinay Sitapati’s book is a very readable account of what went into the making of the BJP. The first chapter, “Hindu Fevicol”, itself is worth the price of the book because it lucidly describes the context in which Hindu nationalism was birthed. One catalyst was the creation of the Muslim League in 1906 that initially lobbied for electoral parity between Hindus and Muslims in British India, although the author notes that for “roughly one Indian Muslim there were three Hindus” at that time. Although the British would not concede to equal Hindu and Muslim representation, they did create separate electorates, the beginning of the fault line that we still live with.

The chapter swiftly races through the foundation of the Hindu Mahasabha in 1915 as a pressure group within the Congress only to split from it later. It links up to the evolution of V.D. Savarkar and his ideas about who is a Hindu (as opposed to what is Hinduism) and his doctrine about the territorial community of the Hindu nation. Savarkar would be the most influential head of the Hindu Mahasabha, with his ideas resonating more today than in his lifetime.

The Rashtriya Swayamsevak Sangh is founded in 1925 by K.B. Hedgewar and Vajpayee and Advani are born in different parts of undivided India. The reader waits for destiny to unite them and it happens quickly as the author skilfully weaves personal tales against a dramatic backdrop. Chapter Two — “Ghosts of Partition” — takes off from the first chapter and Nathuram Godse, the assassin of M.K. Gandhi, makes an entry. This is very readable popular history.

The interesting intellectual point the author makes in the first chapter is that the ideologues of Hindu nationalism were always comfortable with universal franchise and electoral democracy, believing that they had the advantage of sheer numbers. Indeed the main strategy of the BJP even today is to unite different caste and social groups as one Hindu bloc for electoral purposes. The author is sensitive to caste and mentions the lineages of the many characters that people this book.

Personally, I found the sketch of Deendayal Upadhyaya, one of the early thinkers of Jana Sangh, useful. During his many conversations with the media, L.K. Advani would often mention Deendayal’s philosophy of ‘integral humanism’. Vinay Sitapati notes that it bears a remarkable similarity (without attribution) to the texts that guide Europe’s Christian Democrats. The personalities of Deendayal and Balraj Madhok, another Jana Sangh stalwart who would fall out with Vajpayee, are brought out effectively in the book along with the nuances of each individual’s approach to politics.

I preferred the first two sections of the book divided into ‘The Past (1924-80)’ and ‘The Party (1980-98)’ to part three that is titled ‘Power (1998-2004)’ possibly because I covered this era and worked closely with many of the sources the author quotes. But some readers would find it a neatly packaged story of the Vajpayee years or the ‘jugalbandi’ as the author describes it. He uses the word to describe the extraordinary journey made by the two men, a partnership where there could also be a role reversal or an “upturn of hierarchies between themselves”. True, Vajpayee and Advani had a genuine partnership along with the many tensions that were visible during the years in power. But I have a quibble with the tapestry of unions that the author has woven into his imagination as a template for Hindu nationalism. He ends the book by wondering whether Narendra Modi and Amit Shah could, in the future, make similar music. Certainly, the latter serves Modi well but I doubt if the prime minister considers the home minister to be his equal. Everything suggests that the prime minister sees himself as a Supreme Leader soaring above all the earthly problems (many created by him) and Amit Shah is just the man tasked with being the political executioner of his will.

Unlike the voluble BJP of the Vajpayee-Advani era when the relationship between the Big Two could have been probed by beat reporters, today’s BJP is a closed house where the media are given hand-outs and live feeds of prime-ministerial speeches. Ministers click their heels to attention and hail the great leader, cadre gather and spread out, large amounts of money lubricate politics and the IT cell spreads disinformation. Read the book to learn of a gentler, kinder time and understand the impulses that got us here. This is a welcome addition to the very limited quality books on India’s pre-eminent political party.