When art bears witness to life 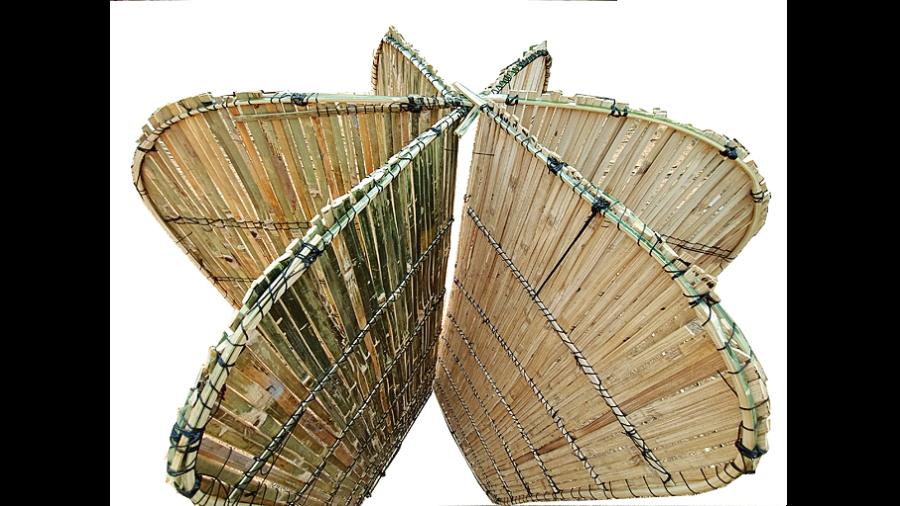 Achchhe din has eluded most of the 183 participants from 21 states shortlisted for the fourth edition of the CIMA Awards show, on till February 27 at CIMA and Gem Cinema. In the 75th year of Independence, the mood on the margins is sombre. Distress is a recurring theme, sometimes inverted with a dark wit. But there’s good news of sorts, too: the traditional genres — painting, sculpture, print-making — reflect muscular health in the hands of highly skilled practitioners — who sometimes weave in allusions to art heritage — even as new media and new material continue their inexorable march.

The 96” X 336” mixed media, Black Grave 2, by this year’s winner, Suman Chandra, spread across the rear wall of the stage in the cavernous carcass of Gem — its theatrical dilapidation matching the mood — confirms how powerful a painting can be. This horizontal landscape contrasts a stunning charcoal ring of toxic black, possibly land degraded by mining, with the delicate beauty of Nature all around in a damning testament to industrial civilization with its in-built Catch 22 dilemmas. Soumen Mondal’s awe at the scary devastation an Aggressive Delta can wreak, seems contrapuntal (Gem, henceforth G).

Yet, water becomes inaccessible with shrinking tables, though its gurgles are tantalizingly audible (Sangam Vankhade, G), while the marauding ocean is blackened with oil spills (Rashmi Trivedi, CIMA, henceforth C). When land is increasingly throttled by concrete, a banquet may soon offer just Concrete Dinner (awardee Sayantan Samanta). And if the tormented earth (Kaushik Gupta) sets off an ominous agitation among trees (Manas Naskar), perhaps nervous of their reckless felling for urban consumers (Sangeeta  Kodimyala), it could intimate an apocalyptic holocaust (Deepika Mali, all G).

Awardee Ravi Morya’s faded, tattered, patched-up collage and Khokan Giri’s etching, evoking a disintegrating horizontal scroll, echo similar socio-environmental anxieties (both C).Well, things fall apart, inevitably, whether fragile (awardee Subhankar Bag) or grand: structures with a pretence to immortality, that is. As the awardee, Akshay Maiti, warns in his picturesque architectural ruins, Time scripts disintegration, even of civilizations, leaving archaeology to scrounge for and recover their traces (both G).

Man isn’t answerable to Nature alone for his action, but to man as well. The trials and traumas of the pandemic — the utter bleakness of isolation (Souvik Das, G; Ankan Bandopadhyay, C), the epic trudges of migrant labourers (awardee Satyaranjan Das, C), the abandoned bodies (Yashwant Singh, G) — have been given a wry sanctity by the  awardee, Anirban Saha (C), in an illustrated book cradled in a stand as though it were some sacred manuscript.

But it isn’t just Covid. An implicit angst pulsates as the chilling subtext of contemporary life itself: social conflict (Ritwik Mondal, C), the submission of the voiceless before brutal power (Portia Roy), and the precariousness of those in makeshift shelters (awardee Jaladhar Nashkar), perhaps hanging up patchwork quilts by dirty roadsides (Sriparna Dutta), are its dissonant refrains. Yet, a home is no guarantee against violent disruption for the signs of hasty flight are palpable in Archisman Roy’s installation. And does the rampage of Ramdas Tolil’s Furious Bull, surrounded by coconut shells that resemble begging bowls when they don’t refer to skulls, predict the dehumanizing squalor of indigence (Sukanta Hazra, all G)?