Beyond time and space

Julien Segard divides his time between France and India, apparently spent much of the pandemic year, 2020, in solitude in France in a remote cabin he’d built himself 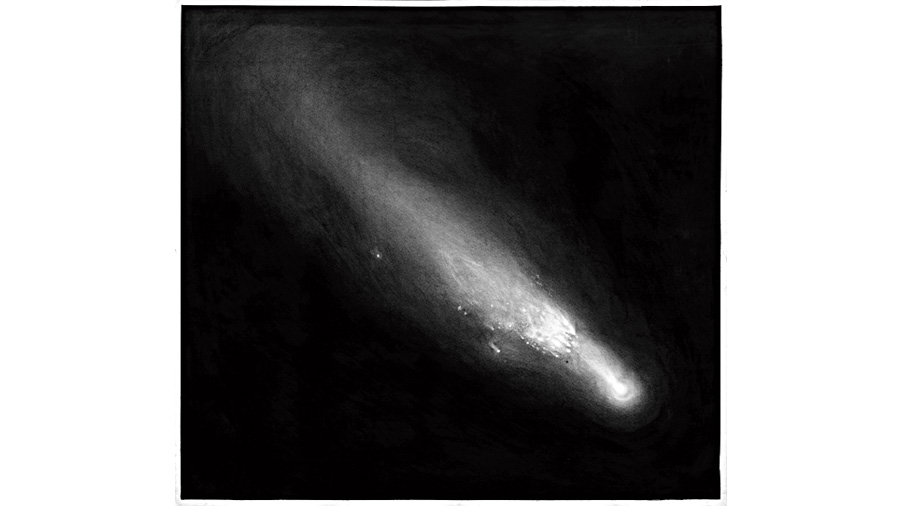 Nowhere is as anonymous and ubiquitous as everywhere. Where rational indices become irrelevant as firm, familiar specifics are eclipsed. For Julien Segard, this nowhere resides without borders somewhere between an ineffable, unfathomed darkness, pierced by hurtling stars or maybe galaxies trailing burning gases and incandescent, effulgent meteorite splinters; and tangible, man-made constructions with beams and panels that fold up space into narrow, manageable units. The way Time is sliced into countable segments by the clock and the calendar. In fact, the Time-Space continuum that confounds man-made parameters seems to be central to Segard’s wondering search.

The French artist, who divides his time between France and India, apparently spent much of the pandemic year, 2020, in solitude in France in a remote cabin he’d built himself. This aloneness among the elements in his temporary abode spurred imaginings, untethered to gravity, logic and probability, into his View from Nowhere at Experimenter gallery (Gariahat), which is on view till July 31. Soaring into an unmapped space and returning to material dimensions, he seems to be examining the nowhereness of conundrums that are true everywhere and always — those of scale, identity and matter — to reconcile the immeasurable and the minute; conceive a limitless universe from the perspective of a lone individual anchored to physical and social references; ponder the enigma of life emerging out of nothingness.

Such philosophical reflections aren’t exceptional: the thinking mind, ruminating on the reality of akashbhora surjo-tara... tahari majhkhaane ami  peyechhi mor sthhaan as part of cosmic play and yet apart, is what led to the Rig Vedic Hymn of Creation. What’s interesting is Segard’s splendid simplicity of artifice and the subtlety of his artistry. For his eponymously titled series of what can be called space drawings, he choses paper of imposing sizes — 59” x 59”, say, or 60” x 158” — and covers it with charcoal. It’s the very blackness of charcoal that becomes a correlative of infinity, of vast distances and depths.

It’s a blackness of gradations: so dense at the extremities as to look like oil; so artfully inflected in the middle as to evoke a sensation of a dramatic cosmos where matter — solid, tactile, heavy — drifts in void for all eternity (drawing III) and a perpetual tandava is on (drawings lV and V). The white of the paper base, breaking through the black in teased interludes, glows bright, and seems to erupt into sparks and rays of blazing heat that cool down at the peripheries, dispersing in space; or, as in drawing V (picture), hint at great speed: white flames radiating gaseous particles spiralling as they plunge across the sheet.

And then there’s the measurable: the stunning 118” x 183” cabin interior in Silent Spring, recreated as a single-point tunnel perspective by assembling separate pieces like in a jigsaw puzzle. Charcoal and chalk on found paper tinted beige suggest wooden panels and sturdy beams with veins. They run along the walls of the cabin leaving narrow slits between them on one side. In Dustlight the paper is paler and the black a little more assertive, as though day, melting into a milky afternoon, has percolated into the cabin, filling it imperceptibly with diffused light. The receding perspective in the cabin drawings transcends material confines and becomes a telescope into space. Could that be Segard’s captivating strategy of resolving contraries?