Crafted by Shomik Ray, 'The Last Six Days of Dasharath' was presented by Delhi-based Shapno Ekhon at Sisir Mancha recently 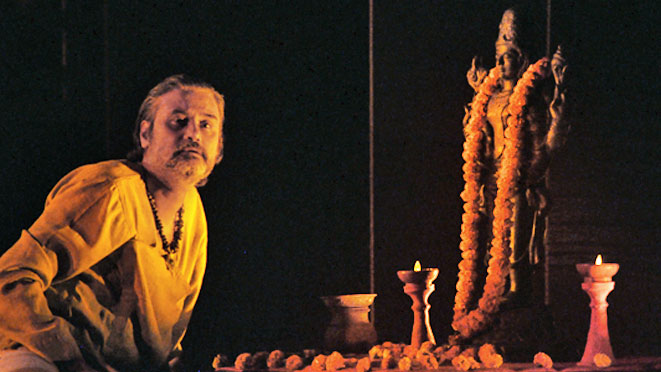 What happened to Dasharath after Ram, Lakshman and Sita left Ayodhya for 14 years of exile? It is well-known that the grief-stricken king took ill and eventually succumbed to death within a week. But what occurred in the meantime? Many renditions of the Ramayana are silent about this. Valmiki, however, illustrates this period in some detail. Taking a cue from this, Shomik Ray crafted The Last Six Days of Dasharath and Delhi-based Shapno Ekhon presented it at Sisir Mancha recently.

Although there is no dearth of contemporary play-writing on select episodes of the Indian epics, most of them end up being monologues exploring the pent-up frustrations of fringe characters. Ray paints a fuller canvas and his creative collaborators chip in commendably. The most remarkable elements in Suman Sengupta’s stage design were a sculpture of Vishnu placed down left — it served as a sort of confession box — and a large brass bowl down right that connected the production with ritual cleansing. The light designer, Dipankar Dey, kept Koushalya’s bedchamber deliberately under-lit, thereby adding to the ancient feel. Although the music score lacked imagination and the costumes had too many stitches, the text of The Last Six Days of Dasharath was rich, unraveling darker sides of the epic.

The play starts with an intense exchange between a frail king and his fiery queen. Ray, who also directed the production, played Dasharath with psychological consistency. Shahana Chakraborty was passionate as Koushalya. The prolonged first half banked entirely on their honest exploration of personal crises, harping mostly on gender issues, and culminating in an edgy sequence before the water. The second half, involving Dasharath’s exchanges with the charioteer, Sumantra, who supersedes hierarchy, and Valmiki, who opens up his unsavoury intentions, was brilliantly written. But it was let down by pedestrian acting by rank newcomers.

As theatre in Delhi bleeds owing to the administration’s apathy towards performance spaces, Chittaranjan Park-based Shapno Ekhon may consider more such visits. After all, English theatre is not doing well in Calcutta.