Anandee returns to the stage after a prolonged hiatus with 'Mathur' 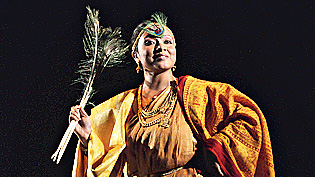 Does viraha ring a bell for a Calcuttan? The rural-urban divide in the Bengali mindset, in addition to an inexplicable aversion for narrative forms rooted in rituals, often comes in the way. This perhaps explains why the Theatre of Roots movement never really took off in Calcutta. Anandee’s return to the stage after a prolonged hiatus and the presentation of Mathur at the Academy of Fine Arts auditorium make one think afresh.

The evening, hosted by Paikpara Akhor, on November 9 started on a regular note as the group presented two short-length dramas loosely strung together as Maa O Meye. Written by Sunetra Ghatak and Mainak Sengupta, the plays — a sad tale about the systematic silencing of women’s voice in a Taliban-style regime and a rib-tickling comedy about a mother-in-law teaching her daughter-in-law a lesson in the ways of the world — appeared half-baked.

Akhor lived up to its name with Mathur. Barring a sensible light design by Dipankar Dey, the setting was similar to an asar of pala kirtana. The arena was flanked on either side by seasoned accompanists like Shukdeb Das (srikhol), Nilanjan Ray Chowdhury (harmonium), Nirmalya Pal (bamboo flute) and Uday Haldar (effects), as Bhadra Basu lent her weight with supporting vocals. However, it was Anandee’s absolute command over all aspects of theatre that kept the audience riveted for 90 minutes.

Mathur, the narrative cycle that begins with Radha’s pangs of separation and ends with Krishna’s return from Mathura to Vrindaban, is pregnant with dramatic possibilities. Anandee laced her performance with traditional padas in Sanskrit, Brajbhasha and Bengali, not to mention the lyrics of Vidyapati and Chandidas. However, it was her abhinaya — including the sattvik swings and aharya interpolations like using the peacock feather — that lent credentials to the drama. Her poise and exposure to a wide gamut of north Indian performing arts were displayed in good measure, especially in the sequence involving Vrinda and Krishna at Mathura. The ecstatic response of the Academy audience spoke volumes about the craving for theatre rooted in narrative tradition.