CINE PLAY: Santanu Bandyopadhyay projected video recording on a wall where they read out the story, whereas the action detailed in the narrative was played out by them live, maintaining complete silence. The ploy worked seamlessly. 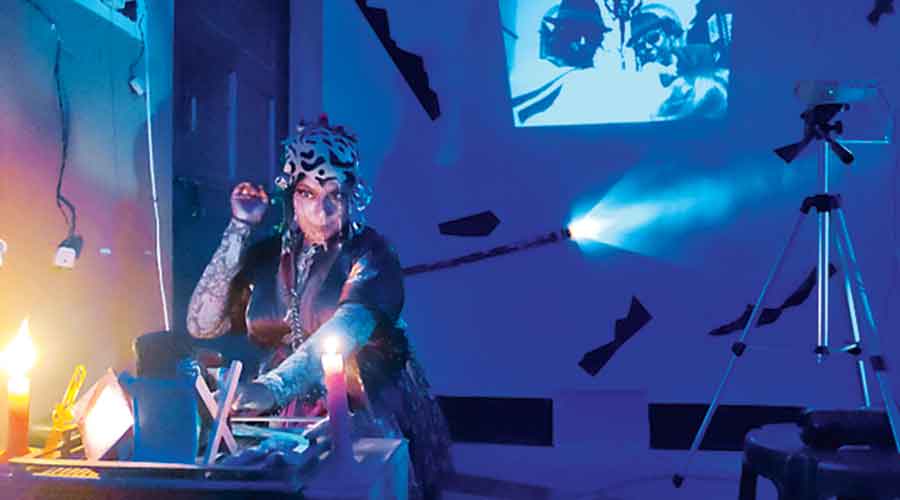 Santiniketan is fast emerging as the happening place for innovative theatre practice in West Bengal. This has nothing to do with Visva-Bharati though. With more and more theatre practitioners scouting for spaces fit for intensive training and practice, there are surprises at every turn in and around Santiniketan at this point. Achira, for instance, is located at a walking distance from the Shyambati Canal bridge, off the road leading to Goalpara. It opens its doors every first and third Saturday and treats a small audience with short, experimental pieces designed exclusively for the space.

Chaturtha Matra, the group running the space, presented End of December on July 3. As the monsoon evening descended and the audience settled down in the sprawling, dimly-lit drawing room — with a staircase going up and the garden a step down — the setting was perfect for an immersive theatre experience. Santanu Bandyopadhyay teamed up with the veteran, Kaberi Basu, to present a ‘cine-play’ based on “House of the Sleeping Beauties”, a short story by Yasunari Kawabata, a Japanese Nobel laureate, that Basu translated into colloquial Bengali.

Bandyopadhyay, known for his innovative ways, projected video recording on a wall where they read out the story, whereas the action detailed in the narrative was played out by them live, maintaining complete silence. The ploy worked seamlessly.

Abhimanyu Bandyopadhyay designed a non-intrusive soundscape that was crowned by a late Leonard Cohen composition which brought a sonic counterpoint to an otherwise faithful recreation of life in urban Japan in the mid-20th century. The lighting scheme really moved things around. The lights — improvised from readily available options — fell from numerous sources, tucked in every nook and cranny of the space, briefly illuminating the dark crevices as the actors played the surreal narrative out. One was reminded of the quiet flow of an Ozu film, though the contents were different.

With the proscenium spaces presently out of bounds, one looks forward to more such alternative experiences. Whether they would bring a section of Sonajhuri haat-hoppers in, thereby bolstering an economically viable theatre model, remains to be seen.

A melodious ode to monsoon