Advertisement
Home / Culture / Arts / The past in a new light

The past in a new light 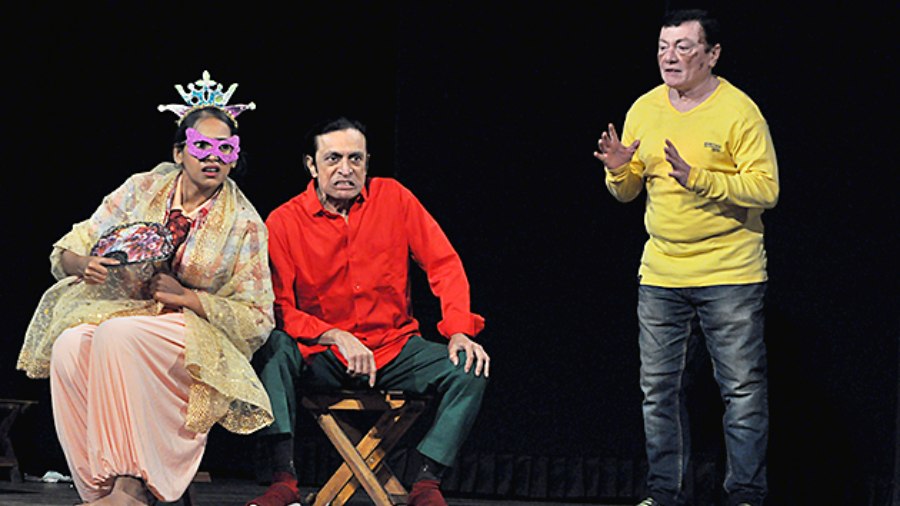 Parashuram, aka Rajshekhar Basu (1880-1960), who is best known for his humourous fiction laden with satirical takes on Bengali society, seems to have caught the fancy of Calcutta’s theatre groups. The last decade has seen quite a few stage adaptations of Basu’s works. Barring a few, such as Howrah Bratyajon’s Anandibai, most groups played them straight, locating them in the period specified by Basu. Ushneek’s Dui Buror Roopkatha (picture) has raised the bar.

Inspired by Bose’s “Dhusturi Maya”, the story dabbles in elements of fantasy with two elderly gentlemen — one married, the other a bachelor — deciding to follow the magical prescription laid down by the mythical birds, Byangama and Byangami, to return to their youth. They wanted some excitement after retirement and to make amends for the restraint they practised earlier in life. One of them gets involved in romantic dalliances only to realise that domestic bliss is far more attractive. The other, equally flummoxed, decides to follow suit and both return to their former lives. Sounds conservative? Of course, but it is not without a taste of the trivialities and ludicrous situations that Basu mastered.

Adapted and directed by Ishita Mukhopadhyay, Dui Buror Roopkatha turns out to be a rib-tickling comedy led from the front by Subhasish Mukhopadhyay and Kamal Chattopadhyay,  both old warhorses with excellent comic talent. Balancing the timeline poses a challenge for Ishita. For instance, she could not do without the episode involving Rajkumari Spandachhanda Chowdhurani (Mouma Nascar), whose earnings from her East Bengal estates dipped since Bengal was partitioned in 1947. Ishita does not downplay the crisis emerging out of the abolition of the zamindari system, but follows Basu’s satirical intent closely. In an effort to balance the timeline, Ishita inserts a character named Gomata (played to perfection by Sharmila Maitra) and colours her with all the idiosyncrasies around the cow cult. Ushneek’s young cast did its best to match the seniors. One must mention the song and dance routines that spiced up the production. Kasturi Chattopadhyay’s choreographic skills came in handy.

Plaban Basu has shown remarkable finesse in dramatising fiction in recent times. His collaborations with Rangashilpi, a Hindi theatre group, look promising. Before the pandemic struck, he impressed us with Jamila (picture), a lucid adaptation of a story by the Kyrgyz writer, Chingiz Aitmatov, which revolves around a woman wronged by a predominantly patriarchal society. Kalpana Jha was quite a revelation in the title role.

Rangashilpi followed this up with a joyous adaption of Phanishwar Nath Renu’s Panchlight. This reviewer has seen at least half-a-dozen adaptations of this story, not to mention a recent film. However, Plaban Basu’s adaption, banking on community spirit and the uninhibited stage presence of the unsung actors, stands out. In Sadho Ye Murdon Ka Gaon, he tries to work out a narrative on the social and sexual exploitation prevalent in the pre1947 era by collating stories by Anton Chekhov, Sarat Chandra Chattopadhyay, Premchand and Saadat Hasan Manto. But too many cooks spoilt the broth. Only Dishari Chakraborty’s music design stood out.