The mighty decider of destinies

Exploring The Politics of Paper as surface, material and object, artists came up with a range of stimulating options at the Emami Art show 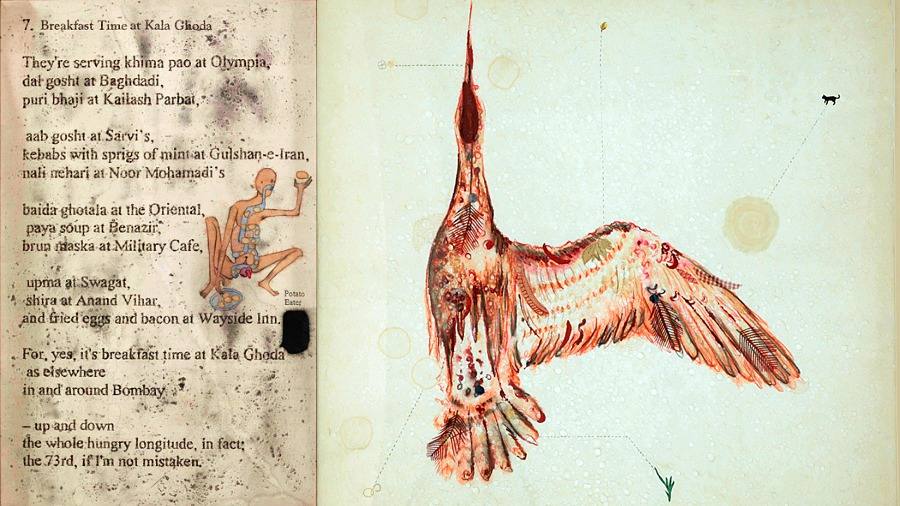 Paper has, indeed, been a mightier, doughtier decider of destinies than, say, gunpowder: of churches, kings and lords; of superstitions, biases and science. This light, transportable, foldable, sliceable, mouldable, printable, storable medium of exchange spread new ideas and ideals, both for weal and woe. So yes, paper has been a political tool and the digital age will not change that. Hence, exploring The Politics of Paper as surface, material and object gave artists a range of stimulating options at the Emami Art show at Kolkata Centre for Creativity in February-March.

The most unabashedly political of them came from Atul Dodiya’s soiled parchment on which the naked “potato eater” sits with raised knees and the fisherwoman who’s “an armload of bones” salivates over a plate of peas as the roadside “installation” of vegetable peel and fish scraps from the previous night’s dinner are swept away to make way for breakfast at Kala Ghoda, Mumbai. The crisp lines and sketchy figures turn into a socio-political manifesto, hard-hitting in its irony.

Prasanta Sahu did something equally provocative, using the diagram of an arm as a Farm Tool, to reference textbooks with deadpan sarcasm, lest the fundamental human role in agriculture be overlooked by technology devotees. But do people understand that harvesting doesn’t mean looting the soil? It involves a Conversation with the Land that bestows blessings. Here, the artist has crafted paper sculptures from plaster moulds of vegetables, bleached and labelled in ink, their rich organic colours lost in whiteness.

Where would human civilisation be if literature and scientific research weren’t immortalised on paper? Anecdotes of little chits that passed on information to pre-Independence revolutionaries, to be chewed and swallowed to outwit British police, have become legend. Anju Dodiya’s images, evanescent as mirages, and created in watercolour, charcoal and soft pastel, reminded viewers that paper has been an irreplaceable partner of the pen and the human brain. Jagannath Panda’s tribute to paper takes him to its origin: the tree, seen as a self-renewing ecosystem. With cutouts that refer to wood, complete with veins, the artist makes the most agile, beguiling patterns.

Several artists concentrated on paper as surface. Chandra Bhattacharjee, for example, made its whiteness gleam in the dark in his charcoal and watercolour works. A dim, luminous vapour cloaks the night in one; white limns the edges of plants in another; plumes of white flame shoot forth elsewhere. This makes the suite poetic, reflective and strangely mysterious. No other surface but paper could bring out the delicate tactility that Adip Dutta’s ink and brush evoked in a mesh of nervous, slack, tangled lines and finely speckled textures. Its resonance of urban chaos and unsettling transience makes the drawings ageless in their relevance.

T.V. Santhosh’s watercolours had a simple, human appeal with their accent on loneliness and vulnerability. N.S. Harsha’s tour de force was Reclaiming the Inner Space, quite an assemblage at 12’ X 39’ with 39 panels. But for all the fuss, it wasn’t as effective as Mithu Sen’s small, subtle works. Paper was both surface and substance in her soaring, back-lit bird, animated with a flurry of quick strokes. Her 15 box frames emphasised the fragility of paper, which she pricked to conjure up amusing shapes that were given little details with paper cutouts: a flame soiled with sooty black, for example, lent a firm identity to a lantern. And finally there was the inimitable Jayashree Chakravarty for whom paper becomes a precious library of life, preserving discards in its layers that are like fossils buried in geological strata.