Advertisement
Home / Culture / Arts / The many shades of life’s wounds

The many shades of life’s wounds

Unlike Arunima Choudhury’s previous shows, where the woman’s composure and ease in her ambience were romanticised, here, the ageing woman is often made to appear vulnerable in her unattractive nudity 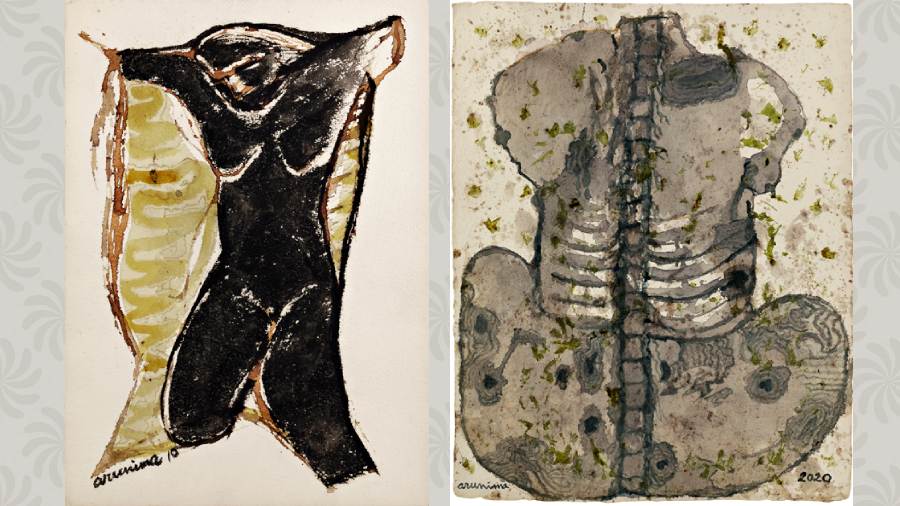 On the autopsy table of the ‘mora-kata ghar’ in Siliguri, lies the body of a teenage schoolgirl: the poison she’d taken ended both her own life and that of the foetus inside her. Her shaken friend can’t tear herself away from this surreal encounter with a tragedy of multiple dimensions: patriarchal demands on women, notions of shame and honour, and the incidental victims sacrificed to hypocritical codes. Years have gone by yet the anguish of the artist, Arunima Choudhury, remains a cathartic memory that sets off The Dark Edge of Green.

The title of her retrospective — it ended in August at Emami Art and was curated by Nancy Adajania — reminds the viewer of how darkness creeps into tender green early in life. Its other name is, of course, reality — when little girls lose their innocence to uncomfortable stares and touches and begin to feel guilty about the body and the demands nature has given them. Unlike the artist’s previous shows, where the woman’s composure and ease in her ambience were romanticised, here, the ageing woman is often made to appear vulnerable in her unattractive nudity.

The Woman and the Bird is a particularly powerful example to cite, recalling the paradox repeatedly visited by Arpita Singh. How, when the strutting lure of the young woman’s body — both her weapon and her weakness — is replaced by ageing, bloated, flaccid outlines, the parameters of femininity get altered and leave the elderly diffident, somehow reduced, maybe isolated, confined to the identity of mother and matriarch, no more a maiden. This sense of contemplative aloneness recurs in other works: Inside the Net, Girl Lying, The Thinker, in acrylic on canvas, and in the series, Beastly Games and Other Love Stories, in vegetable colours on handmade paper. Particularly disturbing in its innuendoes is one where a dark, headless, armless woman’s figure seems crucified, as her knees buckle under her (picture, left). Body and Soul (picture, right), in ashen colours, is a painting that transcends the gender binary. Its sculpturesque torso, seen from behind, is held in place by the axes of ribs and the vertebral column. The work is rooted in a philosophic awareness of the enigma of the body: the only vehicle of life with all its richness, of agony and ecstasy, of thought, creativity, pain, fear and action, which can turn into an inanimate object in seconds.

But Choudhury still nurtures the green in her imagination. A delightful series of enamel paintings on metal — a genre the artist has often explored in the past — celebrates nature. The infectious radiance of her naturescapes, particularly Red Sky, Blue Hill, Huts, comes as much from the childlike simplification of form as from the gloss of the medium. But then, idyllic arcadias aren’t the complete story: a network of tattered browns, agitated with nervous foreboding, as it were, warn of withering forests, bereft of green.

The antidote to the loss of nature comes from the artist’s gesture of retrieving and preserving, like delicate, irreplaceable heirlooms, little signatures of the earth in her eco prints on rice paper and cotton: leaves, stems, tendrils, tantalisingly tactile and real and, yet, without substance, like evaporating mirages. When applique and stitches are added to a cotton piece, it becomes an act of mending, of renewal: if there’s no other home for living creatures but the earth, then it has to be taken care of.

Another set, Drawing, must be mentioned. Its brisk, sentient, calligraphic strokes in black and grey lend to enamel the evanescence of watercolour as their sketchy guile evokes, especially in XI, XII and XIII, the feminine form with nonchalant brevity.