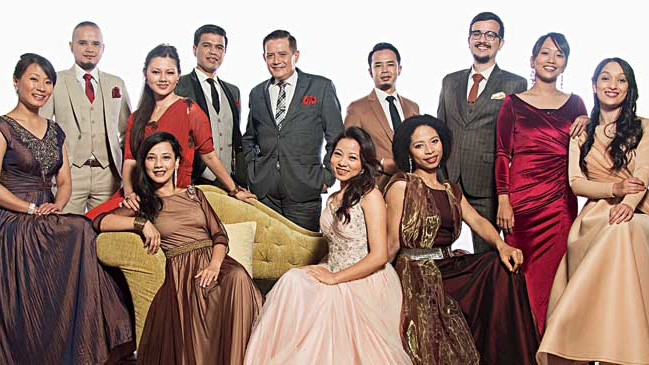 It’s been 10 years since Shillong Chamber Choir won India’s Got Talent. Since then, the choir has travelled the globe with its unique music of choral-style revamps of Hindi film classics. Based out of Shillong, it has now come up with a Christmas album called Come Home Christmas that presents traditional Christmas carols with a Middle Eastern sound. We chat with Neil Nongkynrih, the choir’s founder.

What made Shillong Chamber Choir want to come up with a Christmas album?

It’s been 10 years since we made a Christmas album. The last one was when we won India’s Got Talent. It sold very well, with people being fired up by us winning India’s Got Talent. When you go on YouTube, you will have Christmas carols coming out of your ears and nose, and we wanted to do something different.
I started writing the way we usually do for Shillong Chamber Choir, but this time all in English. The choir was ready to record, they knew all the lyrics, the parts were all written out. We work in a very complex way... our Indian musicians who play the tabla and Indian percussions work out of south India and for our Western sounds, we have our orchestra from Europe working, while we sing our songs from Shillong. It’s a very complex process to record any song, leave alone a whole album.

One day I woke up and decided that I couldn’t stand repeating what we had done before. The idea then came to me... we still stick to the songs, we still stick with the carols that people know, but we are going to incorporate different languages. We have ancient Aramaic, which is a dead language, but I found some people in Turkey who are among the very few in the world who still speak this language. They did lessons with us on Zoom to get the pronunciation right. We also sing in modern Aramaic. We changed the Christmas carol We Three Kings to We The Kings and the boys in the choir sang it in Farsi. That’s how Shillong Chamber Choir has always operated... we go to great lengths to make our songs something that we ourselves would love to hear. We sing the famous Hallelujah chorus which is actually in English, but we have done it in Hebrew. We have also done Silent Night in Khasi because the Khasi language naturally lends itself to lullabies. I know that including a Khasi song may be looked at as an aberration in an album which has Middle Eastern sounds, but then our album is called Come Home Christmas.

The album, as a whole, makes for easy listening. I like the Christmas songs by Boney M and that’s also been an influence. So those who like Boney M will like this album, as well as those who like classical music and even fans of contemporary carols. That’s what the album is actually... to make familiar sounds feel refreshing, but not try and be too clever.

Does Shillong Chamber Choir always have to bear the pressure of being innovative and different with its music?

Yes, always. And it gets worse every year. In 2021, I hopefully will be able to come up with my opera. It’s a three-hour-long musical saga that’s taken me 20 years to write. That is really my baby. In Geneva, we did a few songs... gave people a teaser of the opera. We wanted to see how an international audience would receive it... and people liked it so much, for them it was about the music and not the language. The entire story will be based in the Shillong of the 1800s. I have done a lot of research on it. That’s something I am really looking forward to.

It’s been a decade since you won India’s Got Talent. How do you look back at the journey so far?

You won’t believe it probably, but one of our high points was singing in Bihar. People think our sounds are elitist, but I am against that kind of thinking. We performed in Patna many years ago in the middle of the Gandhi Maidan. And music truly knows no boundaries because all the rickshawalas just stopped and started listening to us singing one of Mozart’s most difficult pieces in German. They were so zapped. For me, moments like these stay in my heart.

Another very scary concert for me was singing for Zubin Mehta’s birthday. That was really special because I think he’s one of the greatest musicians ever. And then, of course, having (Italian tenor) Andrea Bocelli coming to my concert and loving our music was special. We have had many highs, but many lows as well.

How has Shillong contributed to your music?

Well, I am glad I don’t live in Bombay. People have told me that if I lived there I would be richer and more famous, but those things are last on my priority list. I lived in Europe for many years and coming back home gave me a sense of security. It’s also virgin territory for a lot of things that we take for granted in the West. When I started doing music here, the atmosphere helped me to freshen out a lot of the pieces that had been otherwise battered.

In Shillong, we sit together as family and friends and make music together, we enjoy together. We enjoy the simple things of life, and I like that. We don’t feel the panic to rush and make music. The simple way of living life here adds to our music, and you will see a lot of that in our opera.

During the lockdown, Shillong Chamber Choir came up with a winning mash-up as part of the I for India fundraiser. How have you adapted to the changing times?

You won’t believe it but we are more busy now than we were in the pre-pandemic period. We are literally sleep deprived. We have set up a virtual studio in my premises and we are relaying a lot of our shows online, right from my back garden. A lot of our work is being done virtually. We did a movie recently, which we can’t talk about yet. Apart from the Christmas album, we have another album with a major label. There’s a lot of work.

The band must be missing the high of performing to a live audience...

Of course. You can never replace a live audience. This connect with the crowd and the energy that they give back counts a lot. We miss that and hopefully we will be back to singing in front of a live audience when things become safer. A group of seven people are actually travelling all the way to Shillong to see us perform. And we are putting up a show for them because it’s only seven people. There are still some people like that who are willing to do these things.