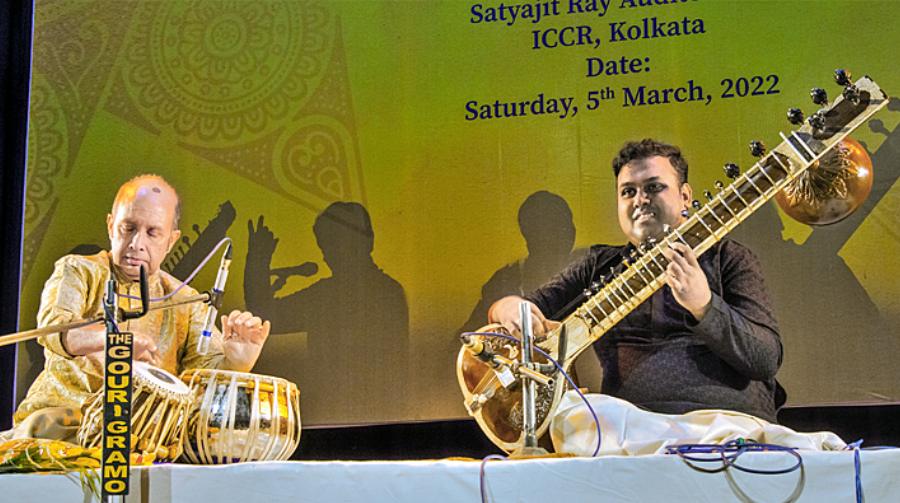 The Dhwani Academy, in association with Orient Day School, organised its annual festival, Saaz aur Awaz, in memory of Guru Jnan Prakash Ghosh at Sarat Sadan. The event began with an enjoyable tabla lahara performed by the visually challenged students. Seven of the best students of the year performed an ensemble in teentaal, a composition by their teacher, Pallab Ghosh. The junior students of the Dhwani Academy, too, presented a charming tabla ensemble in teentaal composed by Pandit Abhijit Banerjee. The perfect coordination among them was noteworthy. The young artist, Arkadyuti Halder, commenced his performance with Raga Patdeep on the violin followed by Desh, and was supported by Ishaan Banerjee on the tabla. The captivating compositions were in jhanptaal and teentaal. Both of them are winners of music competitions arranged by the Sutanuti Parishad. Another talented young percussionist, Arijeet Banerjee, played the pakhawaj in choutaal, its infectious rhythm setting foots tapping in the audience. He is the topper of the Jnan Prakash Ghosh Memorial Competition organised by the Dhwani Academy.

Paramananda Roy enchanted the audience with his flute recital in Bhimpalasi, with Debashish Singha Roy accompanying him on the tabla in vilambit jhanptaal and teentaal. Indrani Mukherjee chose to start with Puriya Dhanashree, demonstrating melodic expertise, and then followed it up with a hori in Khamaj, set to deepchandi taal. She concluded her performance with duff ki thumri, a folk tune, in Manjh Khamaj set to taal kaharwa. Rupak Bhattacharjee on the tabla and Hiranmoy Mitra on the harmonium helped her do justice to her renditions.

Debashish Bhattacharya’s recital on the sliding guitar, Chaturangui, began with Saraswati, with Abhijit Banerjee on the tabla. A jhanptaal composition was followed by teentaal, ektaal and drut teentaal. The perfect blend of these taals added to the tempo and the mood of the festival. He concluded his presentation with a composition by Pandit Jnan Prakash Ghosh in Raga Bhairavi. The final performance of the evening began with Pandit Kumar Bose’s tabla lahara in his signature style (picture, left). He was ably supported by his disciple, Rohen Bose, as a co-artist and Hiranmoy Mitra on the harmonium. The enthralling performance by the veteran percussionist made for a blissful conclusion to the festival.

Sohini Music Organisation presented Raag-Rang 2022, an evening celebrating Indian classical music at the Satyajit Ray Auditorium, ICCR. The programme commenced with a sitar ensemble by the students of Subhajit Majumdar and Kalyan Majumdar in Khamaj set to teentaal. The young artist, Pratham Chatterjee, gave a short sitar recital in Multani with Ashis Paul on the tabla.

Kalyan Majumdar’s sitar performance began with Raga Yaman Kalyan and his elaborate alaap and jor brought out the charm of the raga (picture, right). This was followed by vilambit and drut gats, ornamented with various taans, vistaars and tihais. He concluded with a madhyalaya teentaal gat in Sohini, a composition by Pandit Nikhil Banerjee. The beautiful support by Abhijit Banerjee on the tabla won the audience’s heart. The event ended with a vocal recital by Omkar Dadarkar. He presented Jaijaiwanti. Dadarkar started with a vilambit composition in tilwara, which was followed by two drut compositions in teentaal. He ended his recital with a Shiva bhajan in Bhairavi. He was accompanied on the tabla by Ashis Paul and on the harmonium by Gourab Chatterjee.