Utsaah is a musical series, an initiative taken by Durga Jasraj to spread the magic of music, especially Indian classical, across India through her digital page 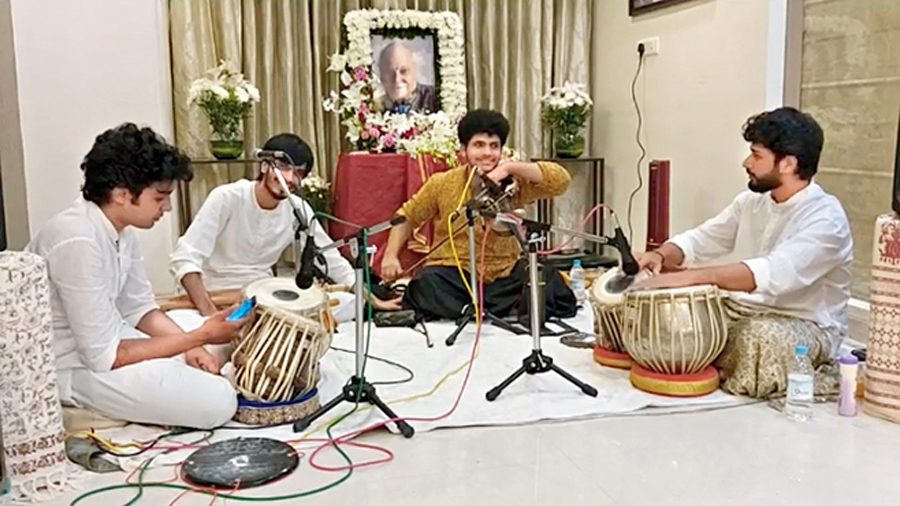 Swami Vivekananda focused on the connectivity of music, life and nature in many of his articles on music. While writing on the Utsaah series (#spreadinghappiness with the YouTube channel, ‘Art and Artistes’) this philosophy came to the mind, because it was on the basis of this connection of musicality and life that Utsaah created a bridge during a burning period — the pandemic. Utsaah is a musical series, an initiative taken by Durga Jasraj to spread the magic of music, especially Indian classical music, across the country through her digital page which was started last year in the first phase of the lockdown. Now, this well-known project has more than 280 episodes and, whatever the Covid-19 situation in India may be, the musical graph of this emotional and inspirational journey has been more or less stable throughout the year. The whole country is musically connected owing to the participation of eminent names as well as rising talent across the nation.

As Covid-19 restrictions were slightly relaxed early this year, the city witnessed some on-ground classical music events. Now, in the current scenario, the scarcity of ground and even digital events has made Utsaah one of the greatest sources of musical happiness. The trend shows an emphasis on young talent since the beginning of the year; during the last few months the audience experienced musical treats from the farthest corners of the country, from Kashmir to Kanyakumari. Neeraja Pandit and Raj Pandit showcased the attributes of Kashmiri music in a thoroughly enjoyable session. The page led to the discovery of a budding vocalist like Kausar Haji, a follower of the Jaipur Atrauli gharana, who presented Abhogi in a recent session. Bhargavi Venkatram’s varnam spread the charm of Carnatic music. The renditions of young vocalists — Abhishek Kale’s Yaman, Aditya Shah’s Ahir Bhairav all the way from Boston, Sohini Sinha Majumder’s Shyam Kalyan, Sudha Ranganathan’s performance of various kritis — were interesting for the regular listeners of Utsaah. Calcutta’s own Sabina Mumtaz Islam entertained the audience with her powerful voice when she presented Chhayanat. The ghatam and mridangam rhythmic session by Suresh Vaidyanathan and Patri Satish Kumar was enjoyable and reminded one of an earlier performance of Shashank Subramanyam as well as Praveen Godkhindi’s beautiful flute recital.

Utsaah put the spotlight on talented children like Sugandha Date (vocals) and Krishang Hariharan (tabla). As Utsaah is a platform for future-generation artists, Shakir Khan needs a special mention for his compact and melodious performance which commenced with Malkaus and continued with Bhinna Shadja and Mishra Khamaj with the tabla of Unmesh Banerjee. Considering the tabla solo, Shubh Maharaj’s dhamaar was entertaining.

The year commenced with the sarod recital of Indrayudh Majumder and the tabla of Debjit Patitundi; the Raga Hemant was enjoyable. The performance of Amit Kanjira and Konnakkol Somashekar Jois was an exceptional session, the sundri vadan of Kapil Yadav was on the list as well. The Utsaah series included dance performances of different Indian styles: Ananya Govitrikar’s Kathak, Bhavana Reddy’s Kuchipudi and Aditi and Spurthi Ashok’s Bharatnatyam. Ronojit Bhuyan’s piano was refreshing. Utsaah also gave a little feel of Bollywood to its audience by featuring Dr Jaspinder Narula, Richa Sharma and Lalit Pandit. Along with renowned names like Subhankar Banerjee, Sanjeev Abhyankar, Omkar Dadarkar, Wasim Ahmed Khan and Debashish Bhattacharya, the recent Utsaah series captured young talents, like the flute of S. Akash and Nikhil Das. The vocalist, Vinay Ramdasan, on Darbari Kanada, Ambi Subramaniam rendering Saraswati on the violin, Rajat Prasanna’s Marwa on the flute, the flautists, Suchismita and Debapriya Chatterjee, rendering the Raga Yog and Abhisek Lahiri’s sarod need a special mention.

Pandit Jasraj passed away on August 17, 2020. His daughter, Durga, transformed her pain into a musical offering to her father in the form of a special programme on the 17th of every month. In one such programme, listeners got to hear Ronu Mojumdar’s flute and Niraj Parikh’s vocal recital. But a tribute by a young, power-packed group — S. Akash on the flute, Yadnesh Raikar on the violin, and Tejovrush Joshi and Ishaan Ghosh — to her ‘Bapuji’ will be remembered. Utsaah’s recent performance by the vocalist, Nishad Bakre (Nand), and Sudhanshu and Sarang Kulkarni’s smooth harmonium (Behaag) evoked expectations for more to come.