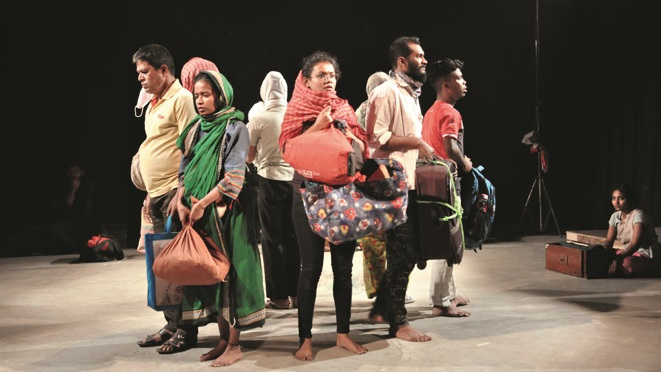 Gobardanga Naksha’s 8th National Theatre Festival (December 23-27, 2020) ended with Pandemic, a home production. This devised theatre piece tries to fathom the changing dynamics of a world coming to terms with the Covid-19 pandemic at its worst phase; it premiered on August 15, at the stroke of midnight at their rehearsal space. Later it moved to all types of spaces available and tried to underline the salient features of the experience of common men and women.

In short, Pandemic is an outstanding collective effort — perhaps the best dramatic piece to have come up from West Bengal during these trying months. It takes a critical look at the images that stayed with us and flirts with our memories. It records commoners’ reactions to the news of 16 migrant labourers being run over by a goods train and makes theatre out of it. It cuts through suffering as a spectacle, objectification of hunger, ostracization of virus-affected fellow citizens, and narcissistic excesses on various social media platforms, ensuring inclusiveness all along.

Although the episode involving the political class’s casual treatment of national emblems and the electronic media’s propensity to create sensations at the drop of hat looks out of place, the satire was unmistakable. At the end it subverts the dominant nationalist discourse permeated through Bollywood film songs like “Ao bacchon tumhe dikhayen” (Jagriti, 1954) and paints a radically different picture. The 40-minute production is marked by a live band that amplifies the performers’ moves across the arena with the audience seated around it and a remarkable scenography that is executed with precision.

The last day of the festival also featured Srabasti Ghosh’s installation performance, Song of Whisper, a Bengali take on Eva Ensler’s The Vagina Monologues. Ably supported by Subhadeep Guha’s soundscape, Ghosh was successful in engaging the audience. Her sincerity showed in every aspect of the short work that attempted to bridge the private and the public life. Assam-based Third Theatre presented Sadhana, a non-verbal piece on a sculptor’s dialogue with his creations in a dream. It received an appropriate surreal treatment by a youthful team led by Biraj Chutia.