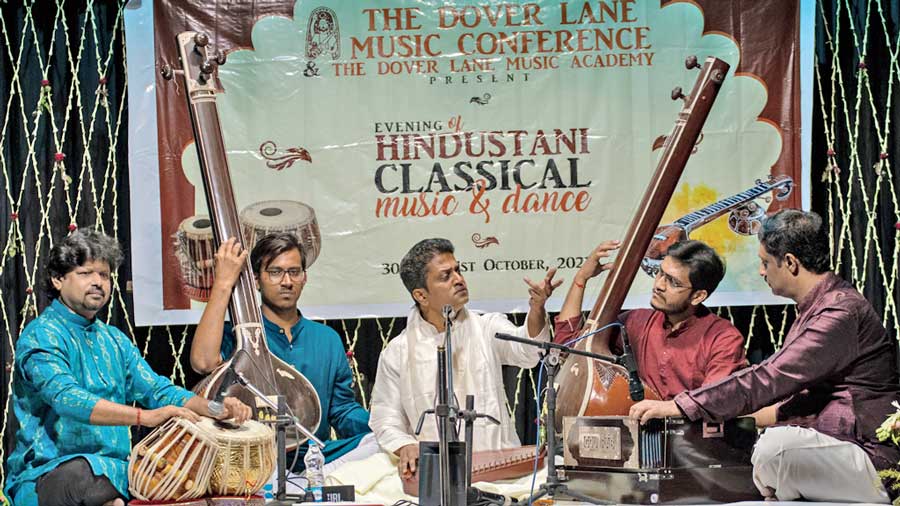 The Dover Lane Music Conference and Dover Lane Music Academy organized a special event for lovers of Indian classical music in the city in spite of the challenges posed by the pandemic. The programme showcased budding talent. Some of these young musicians have received recognition in recent times through various competitions in different genres of Indian classical music.

The two-day musical soiree was primarily telecast on social media and on Dover Lane’s own channel. The event was inaugurated with a vocal recital by Tejaswini Digamber Vernekar, who presented Raga Puriya Kalyan. Tejaswini has a powerful voice; she demonstrated her potential in both the vilambit and the drut kheyal. In the lower
octaves, her voice has the depth to create variations in the vistaars through the movement of the key notes. She was also smooth in middle and upper octaves while presenting taans.

Although a little too structured, Tejaswini set the tone for the event, which was picked up by another young performer, Sohini Chowdhury, assisted by Prakash Chowdhury on the harmonium. Sohini showed her expertise in a bhajan and was applauded by the listeners. The Odissi performance by Urjasee Basak was a pleasing experience
for the audience as well. Urjasee is a talented dancer who depicted the inner meaning of the compositions she performed to with her measured poise and her expressions.
Her first presentation was to a pallavi composed in Raga Rageshree; she then went on to perform to a composition based on “Lalit Labangalata”, the famous verse from Jaydev’s “Geeta Govinda” in Raga Vasant and Malika taal, which was visually attractive too.

The first evening concluded with a sitar recital by Kalyanjit Das, who was accompanied by Soumen Nandy on the tabla. Kalyanjit’s talent flourished under the tutelage of his father, Kushal Das, whose influence is reflected in the technique of his renditions. His act commenced charmingly and the movements were smooth, but it could do with a little clarity at the end.

The second evening began with a Kathak recital by Mohini Saha. The introductory composition was followed by a teentaal where her postures, movements, rotation, bhao and footwork entranced the audience. Mohini was confident about the nuances of Kathak, although more variations were expected of her. Chitrini Paul’s fresh voice in the rendition of Bengali ragpradhan songs was touching. The perfect blend of clarity and melody in her presentations was praiseworthy. The mood was further enhanced by Ankita Sarkar (picture, left) with her sitar recital. She played Raga Bhimpalasi with spontaneity and skill, showing great promise from the very beginning with a brief alaap, jor and jhala, and sweet rhythmic flow in the gats.

The performance by Kumar Mardur (picture, right) was the perfect conclusion for this musical event. He rendered Raga Nand in his signature beautiful style. Kumar has the capability of combining power and sweetness in just the right amounts; this brought out the exquisite essence of the soulful raga in both the vilambit and the drut kheyal. He was spontaneous and charming in the flow of taans and vistaars in the three octaves. The audience was also enchanted by the bhajan towards the end of his performance. He was ably supported by Bibhas Sanghai on the tabla and Gourab Chatterjee on the harmonium.

Last but not the least, the mellifluous accompaniment on the harmonium by the senior artist, Hiranmoy Mitra, along with other vocalists and young Surjeet Singh and Suprabhat Bhattacharjee on the tabla elevated the musicality of the festival.