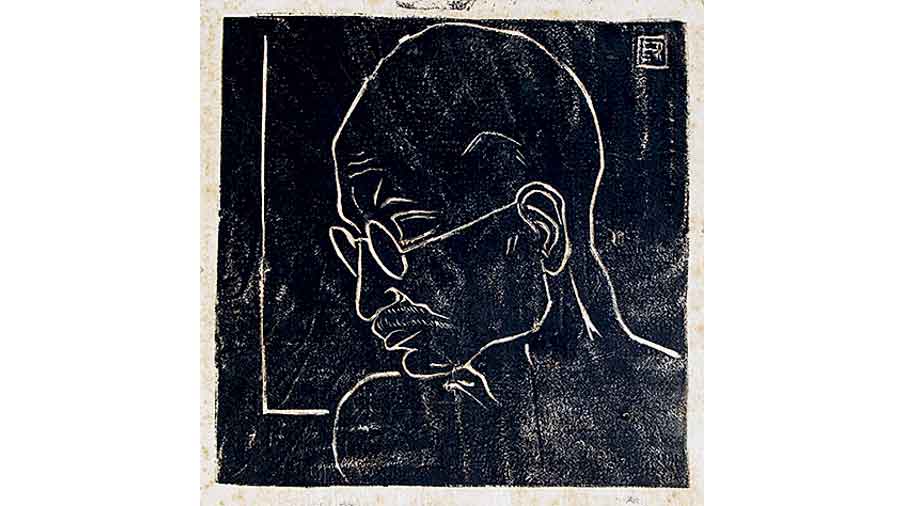 It’s a measure of his relevance that, seven-plus decades after his assassination, Gandhi still occupies a vibrant eristic space where deification and detraction wrestle, as research seeks to temper pious rhetoric. Birla Academy’s recent show, Speaking Gandhiana, was a tribute linked to his 150th birth anniversary, but one in which Gandhi is mystifyingly marginalized, as are his associates, ideas and movements.

Too elastic an interpretation of the term accommodates every kind of art. If Gandhi is taken as a broad, overarching ideological packaging of mythological references and nebulous, all-weather catch words like “roots”, “love”, “truth”, “oneness” — rife with Rashomonesque ruptures and routinely interrogated in contemporary art — it would make the title both simplistic and meaningless. For an institute that’s set rigorous standards for its own shows, this intellectual naiveté is bemusing.

The Academy’s handsome collection, fortunately, comes to the rescue of the show, despite its randomness in bringing together artists from different regions and eras. Its prized items in this context are archival documents of G.D. Birla, a draft of Tagore’s renunciation of knighthood and some Gandhi literature. Coming to the artists, the first one to mention is Nandalal Bose, the creator of the Haripura panels and the Constitution embellishment, whose temperament matched Gandhi’s in its keenness to rediscover the texture of indigenous culture through everyman’s way of life. A roll-call of many big names follow: from Ravi Verma and Chughtai, to K.G. Subramanyan and Bikash Bhattachrjee. Ramkinkar Baij’s sculpture of a striding Gandhi, Ramen Chakraborty’s line depiction of his face and Shuvaprasanna’s portrait of Badshah Khan deserve mention here.

The guest section is quite a letdown for its uneven quality, although an open letter of Narayan Desai, Baisampaiyan Saha’s photographs and the hi-decibel discordance in Mukesh Ganji’s art are noticeable. But redemption comes from Hiran Mitra’s captivating installation and a video by multi-media artist, Wilfried Agricola de Cologne, in which violence, protest and racism — of which even Gandhi wasn’t, in fact, wholly free — bring him back centre stage.