Art emerges from anguish: Boxed by a pandemic 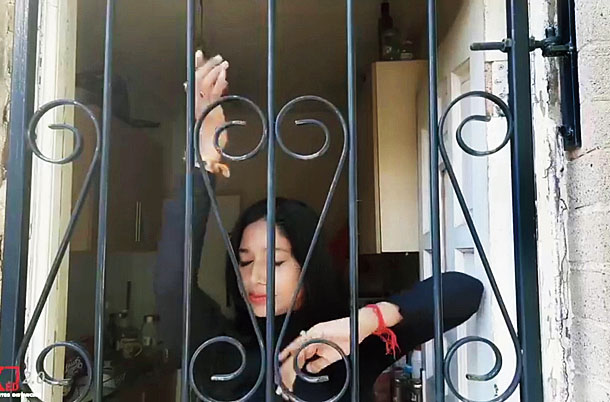 Earlier this year, life came to a halt for movement artists across the globe as all carefully laid plans for shows, rehearsals, recordings and practice were upturned by Covid-19. In this unprecedented and bizarre scenario, creativity required fresh triggers. It was in this context that the dancer-choreographer, Anitha Ratnam, thought up an online camera project of digital commissions with the pandemic and the ensuing lockdown as a premise for young dancers to work around in quarantine. The result is an inspired ongoing series, Boxed, that has got dancers using restricted spaces — a part of the home or habitat where they are confined — to come up with videos of two-minute dance pieces which are professionally edited by Ratnam’s team and aired on Facebook and Instagram.

The plethora of ingenious work in Boxed is themed on fear, paranoia, trauma, anxiety, claustrophobia and, flittingly, even healing and hope, as dancers from different movement vocabularies select spaces both physical and figurative in which they find themselves locked in and create some memorable work.

Anjana Ghonasgi uses the diverse forms she is trained in, Bharatnatyam and tutting, against the backdrop of a dramatic blue wall, playing with a chair as a prop, making a piece that packs in both humour and poignancy. Rathimalar Govindarajoo’s act in a bathtub full of water, in which her fluid and fragmented movements etch out a compelling narrative, is one of the most remarkable site-specific installations in the series so far.

A moment from 'The Second Sunset' by Raka Maitra.
Kathakali Jana

Mitul Sengupta uses the twisting movements of the wrists of Kathak in a desperate attempt to draw motivation from the spiral architecture of her window grille, looking out of it in hope, to make a persuasive vignette. The ballet dancer, Weijun Loh, extracts much from his couch as his narrative arc powerfully explores confinement through humour. A sliding door becomes a metaphor for all that Seher Noor Mehta wishes to push away while it offers her a lens to look into spaces that are not hers from a position of privilege. Rohini Banerjee fills up the constricted space in her staircase with much energy as she tells a disturbing tale of incarceration.

The challenge for the dancers was not to simply execute their regular items on newer surfaces but to explore the spacio-temporal quality of the art while making dance in a vacuum and still make their bodies speak. Whether to use the camera as just a recording equipment or, through it, to connect with the “audience” with an occasional inclusive glance was an interesting and important aesthetic decision.

Raka Maitra’s work, The Second Sunset, was a response to the collection of poems called “You cannot turn away” by the Sri Lankan Tamil poet, Rudramoorthy Cheran, written after the 2009 carnage in that country. Maitra’s work typically moves from the realm of her classical training — she is trained in Odissi and Seraikela Chhau — to freer expression that allows her to dwell upon themes such as, in this case, erasure of cultures, hatred, loss of land and identity.

A deep sense of anguish pervades the piece, as the dancers move in opaque and slow, fearful clusters, first skimming the floor surface and later rising off it in a magnetic sweep, even as a heavily-laden bookshelf provides an ambient backdrop. The collapse of the bookshelf at the end is a stunning metaphor for devastation.