Shades of the fiery feminine 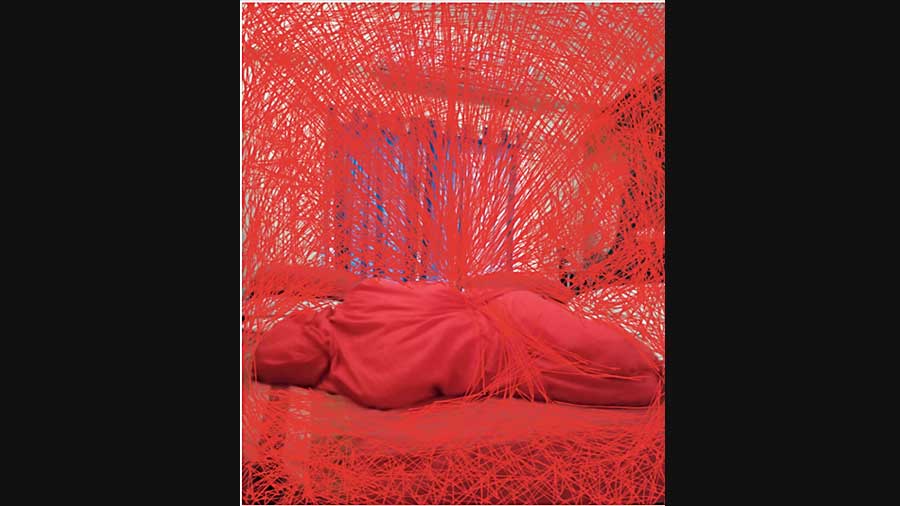 Gender, ethnic, class and language conditioning seep in as fundamental feeds of the individual psyche from infancy. Celebrating the feminine perspective is, therefore, entirely valid even though divergent creative impulses arise from it. That’s exactly what Ganges Art Gallery’s online show sought to do in 7 Women — 7 Colours of the Rainbow; no apologies. Curated by the artist, Chandrima Bhattacharyya, it was on till August 14.

The participant to begin with is Anita Bhattacharya, held in thrall by the goddess, Kali, fascinating for the tangled clues of acculturation that indicate how primitive myths and practices were co-opted by the Aryans over time. To portray this fierce deity of darkness and destruction, unfettered by patriarchal diktats, the artist uses black ink on paper, offset by light grey tones. Four-armed, naked, the tongue out in provocative nonchalance, her Kali 1 is riveting as an avenging Fury. And that untamed image is, in a strange way, reassuring to women, to women wronged.

In Sheema Barua’s Abuse, for example, a wracking turbulence of haywire black and blue acrylic strokes, with one vertical slash of red, tracks the trauma of a woman wronged. Indeed, three mixed media works are titled Stalker, in two of which the woman is reduced to torn body parts, as it were, while in the third she’s felled to the ground. However, Woman 1, sturdy, sculpturesque and abbreviated, is as dark as Kali, predicting untapped netherworld forces within.

It’s tempting to expose the ageing male predator as a Hypocrite but the visual trope of a herbivore makes this the most forgettable of Sudatta Basu Roychowdhury’s works. But Life Jar, where butterflies seem trapped in thoughtless sport as they often are, reverberates with ambiguous suggestions: the vulnerability of beauty, proprietorial demands, socially condoned male prerogatives. Happy to Bleed is, in its understated yet distinctly feminine reflection, another painting to note. 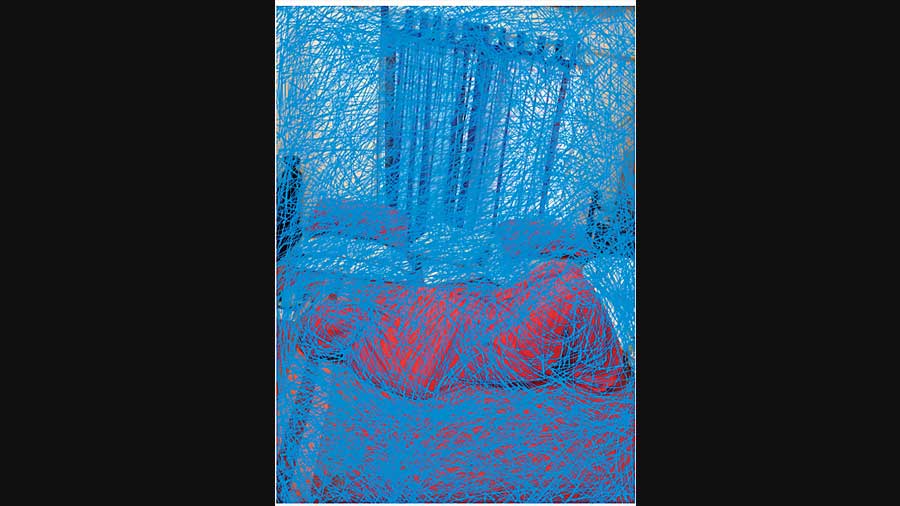 Artwork from the series, In the Time of a Pandemic.
Ganges Art Gallery

Feeling utterly, lethally trapped by an invisible, invincible enemy — the rampaging virus — is what prompted the current series by Lala Rukh Selim of Bangladesh, In the Time of a Pandemic (pictures). Her frenzied digital markings on photographs of herself shrouded in clothes become claustrophobic webs in which individuals are as helpless, as shorn of volition and agency as fish caught in nets (No.s 1, 5 and 6) or prey trapped by spiders (No.s 2 and 3). Interestingly, however, the imagery takes human vulnerability much beyond finite reckoning into existential inexorability.

Pradnya Khandgonkar seeks inspiration from diverse art traditions in her extravagant vocabulary which portrays the woman — in military fatigues and helmet — as ethereal and earthy, caring and combative in Birth of Earth Goddess. As ethereal as Botticelli’s Venus, as earthy at multitasking as many-armed goddesses, nurturing life with one hand and holding a grenade in the other. But giving in to facile and earnest symbolism reduces the images to déjà vu predictability.

With a slender micron nib and a pencil, Piu Mahapatra sketches feathery twigs, leaves, flowers and blossoming buds to bring you fragile, little fallen treasures From the Forest Floor. Satabdi Hati, too, needs no material beyond ink, pen and pencil to profile lyrical cameos with earth, water and sky. While accidental spills of transparent ink form unplanned patterns, quick dashes, scribbly ripples and floating marks of the pen seem to knit them into diaphanous weaves. Understatement remains a winning formula indeed.