Raat Jaga Tara belongs to the genre of theatre with a socio-political commitment — a brand of Left-leaning Bengali theatre that was, most popular in the last decades of the previous century 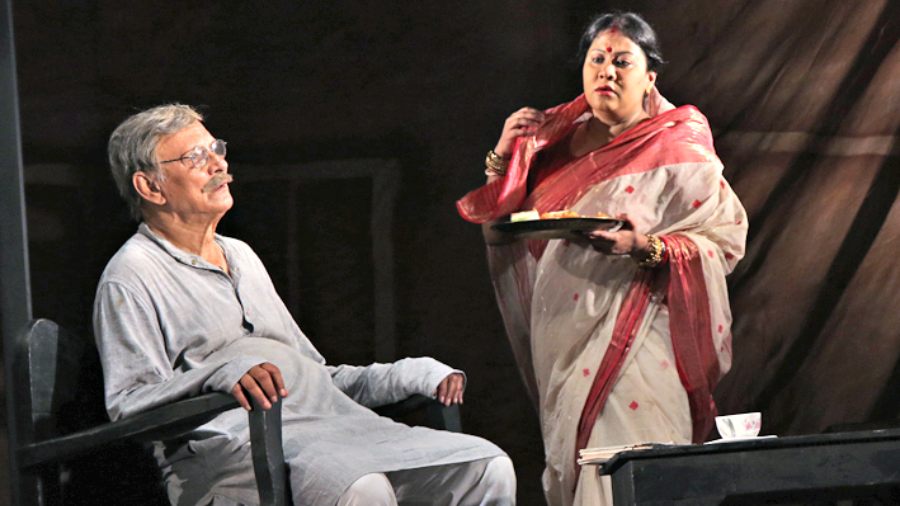 A fascinating aspect of Bengali-language theatre is the dogged survival of hundreds of theatre groups in urban, semi-urban and rural centres for decades. Remarkably tenacious in the face of tumultuous social, political and economic changes, these groups have remained afloat by adopting the simple strategy of taking to the stage as often as possible. Usually helmed by a person whose passion for theatre propels the activities of these groups, their successful continuance depends on passing on the legacy of being in love with theatre to the next rung of leaders. That theatre continues to be a prominent marker of Bengali cultural identity to this day can be majorly attributed to these groups. One such long-surviving North Calcutta group, Mangolik, presented Raat Jaga Tara at Girish Mancha. The veteran director and actor, Samir Biswas — the captain of Mangolik — directed the play and essayed the lead role.

Raat Jaga Tara belongs to the genre of theatre with a socio-political commitment — a brand of Left-leaning Bengali theatre that was, by far, the most popular in the last decades of the previous century. But the element of introspection in the character of Prabuddha (Samir Biswas) is interesting. Leftist theatre of the past teemed with the likes of Prabuddha — a Bengali, middle-class Left-sympathiser of advanced years — but his earlier avatars were fixedly rooted in righteous certainty about the infallibility of their political worldview. The much-mellowed and self-critical characterisation of Prabuddha, portrayed effectively by Biswas, is a good example of theatre responding to the socio-political reality of the times.

The use of a section of the backdrop as a screen onto which images are projected and employing a moving Ganesh vandana as the ambient sound for a process of firm decision-making create moments of enjoyable theatre. Satabdi Basu is fluent in her role, timing her reactions with finesse. However, for a play that swiftly signals its thematic crux, some sequences are unwarrantedly stretched. The final composition, too, is painfully amateurish and deserves reworking.