Advertisement
Home / Culture / Arts / What the anthem teaches us, but we’ve failed to learn

What the anthem teaches us, but we’ve failed to learn 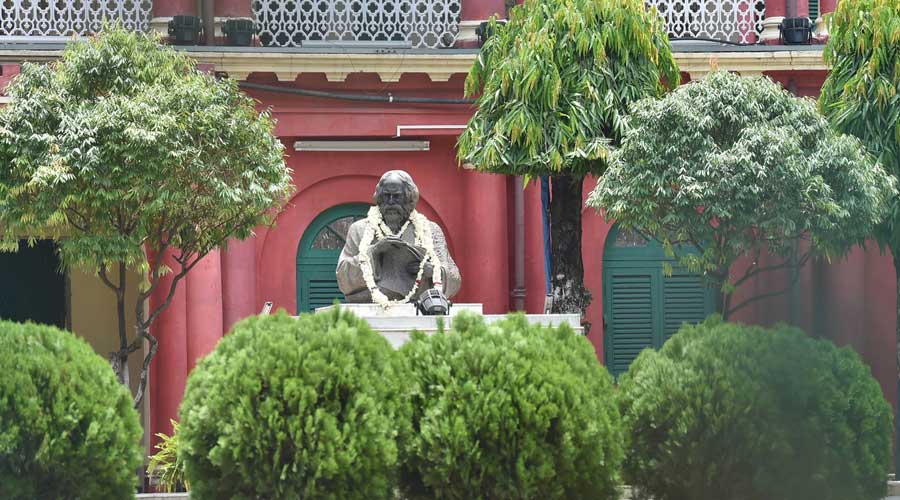 Almost 160 years ago, within the lime, mortar and brick walls of a villa in Jorasanko, a man was born. A man who never promised a covenant. Yet, the commonsensical literal significance of his last name has assimilated the cultural into the religious; a super canonization of sorts. Maurice Blanchot writes how “the citizen in us” is always rendered “merely” as “the indefatigable watcher of pictures.” They use pictures to communicate. At every Rabindra Jayanti celebration (hopefully all online in these times), pictures are all around. Garlanded images of Tagore, or “thakur (meaning god in Bengali)”, with incense and lamps burning, are accompanied by a spread of sweets or fruits just like offerings during any puja. But in making Tagore a god, a tour de force robbed of all things vital and human like vulnerability, fallibility, grief, anger, something very important has slipped under.

By embracing the clinicality of blind diktats born out of absolutism, we continually do disservice to the genius, wisdom and foresight of Tagore. After all, he wrote Bharata Bhagya Vidhata, though not as an anthem. Like our collective memory has obliviated the flesh and blood Rabindranath, the organic nature of his literature, it has also let go of a few of his verses - the remainder of Bharata Bhagya Vidhata which none of us sing and stand up to since these verses are not among those that make up the anthem. It’s time we “stand up” for them as well.

The facilitator of mass unity

Your calls resound, we hear your words of tolerance

As the east west converge beside your throne

We weave a garland of love

You, who marches a people to collective unity

Victory to you the spirit of Bharat

On the morning of February 25, 2020, the third day of violence in Delhi, several Twitter users shared a 30-second video of a group of five men, who appeared to be injured and lying on the road, being surrounded by police personnel in riot gear. One of the men is shown to be bleeding. The video shows a policeman capturing the incident on his phone camera as a protester is being made to sing the National Anthem. As this is happening, a voice is heard saying, "sing Vande Mataram", while another is shouting an expletive. A third person standing up is heard, apparently taunting the men to shout "aazadi" (freedom), a popular slogan used during protests against the Citizenship (Amendment) Act.

A couple of months earlier, as the clock struck 12 on 31 December 2019, the crowd at Shaheen Bagh, the longest sit-in protest spearheaded by Muslim women against the law, burst into a cheer to greet fellow protesters into the new year. Moments later they broke into the National Anthem in unison, following it up with slogans of “inquilab zindabad”.

A path to progress

We have walked the chequered ways of life for ages

Guided by the luminance of your vehicle

And even amidst the clamoring of joyous revolution

We hear your clarion call, you who deliver us from peril and sorrow

People from the northeast are the worst affected by racism in India. Even in the wake of the Covid-19 outbreak, students from northeastern states in New Delhi, Bangalore and Hyderabad, among other cities, have had to face discrimination. One man allegedly spat on a girl from the northeast at Kalina Market in Mumbai in April 2020, calling her “corona”.

The other day (May 2020), Indian woman footballer Dangmei Grace of Manipur, who was adjudged the Emerging Player of 2019 by the All India Football Federation (AIFF), said, “I think the people whoever thinks that we are from other countries, they need to think twice that we have the same language and same National Anthem. So, instead of putting racism against the northeastern people, I think they should realise we all are the same. This will be better for everyone.”

For a better tomorrow

During the bleakest of nights

When the country was sick and in swoon

Through nightmares and fears

You protected us on your lap

You who deliver us from misery

Victory to you the spirit of Bharat

The night is over, the sun has risen

Over the hills of the eastern horizon

The birds are singing, and with a breeze that purifies

We drink from the fountains of life

Guided by your compassion,

Bharat is waking to glory

We bow to you

In August 2019, JD(U) leader Ajay Alok tweeted that the Indian National Anthem had been declared “best in the world” by the United Nations Educational, Scientific and Cultural Organization (UNESCO), and revived a hoax that went viral first in 2008. His post was circulated widely on Facebook, Twitter and WhatsApp. UNESCO has never even pondered the idea to rate national anthems from around the world. After all, who would want to be part of such a crass and counter-productive exercise?

We live in a post-truth world, surrounded by deep fakes and spurious WhatsApp forwards. One cannot be sure about anything. Hence, fact checks are mandatory. But no fact check is needed to iterate the ethos and sentiments preserved in the National Anthem. It’s very definition resists regimentation. So, while paying homage to Tagore and his anthem, let’s not merely stand up. Let’s stand up for what they enshrine.