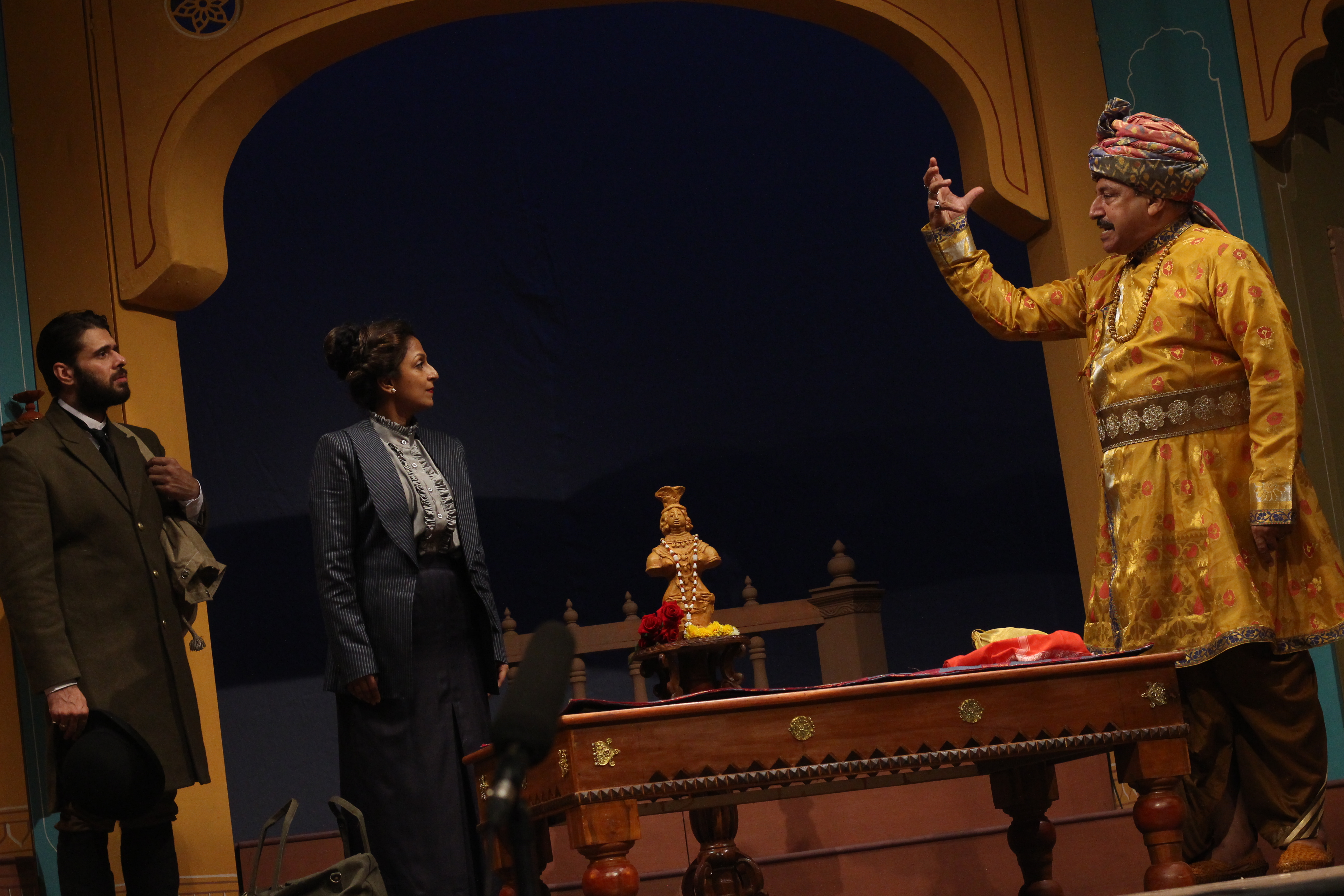 Theatre director Sunil Shanbag took on the mantle of revisiting the play, which opened at the renovated Royal Opera House, where it was originally staged
Image: Prithvi Theatre
Pragya Tiwari   |   Published 05.11.18, 02:16 PM

The metaphor is hardly subtle. But unlike the bulk of partition literature this play was not a post-fact lament – it was a warning against the tragedy that would unfold two years later with the creation of Pakistan, the mass migrations, and the ensuing bloodbath. Using a simplistic, emotionally charged story, Kapoor meant to rally his audience to change the course of history.

The metaphor of a family divided was used partly for its emotional appeal – Kapoor wanted to get through to the masses. But it was also used to try and escape censorship by passing the play off as a family drama. Nonetheless, censorship and controversy besieged the play. Even before it was released it was met with staunch political opposition – particularly from the Muslim League that saw the play as an attempt to delegitimize their claim for a separate nation for Muslims.

The British government refused to grant permission to Kapoor to perform until he had obtained clearance from the Muslim League, ostensibly to prevent the law and order situation from getting out of hand. He held a meeting with the objectors in Bhindi Bazaar to try and convince them to let the play go on stage. He even tried to show the play to Jinnah in the hope that the latter might prevail over the League, but the agitators did not relent.

However, Kapoor was not one to give up. When he went to the Grant Road Police Station to collect the rejected application he found that the rejection notification was stapled on rather than written in, so he simply took it out and handed over the rest of the application to the authorities who assumed the play had been cleared. He is also said to have met with British government officials and made a strong case for free speech forcing them to relent on principle. “My law studies were finally of some use,” he said triumphantly.

The play opened at the Royal Opera House, amidst protests and agitations, but ran to packed houses. Every show would end with Kapoor’s impassioned appeal for communal harmony and a call to break the wall. There are accounts of the audience answering that call and climbing on to the stage to storm the wall on set. Not even the famously stoic Sardar Patel was above its raw emotional appeal. He was scheduled to make a quick appearance for one of the shows but ended up staying for the entire duration of it. Moved to tears, he delivered an impromptus half hour speech at the end of the show, which led to Prithvi Theatres being exempted from paying Entertainment Tax.

But the play could not stop the wall from coming up. Two years after this hopeful triumph over censorship, the worst prophecies of Deewar played out in the subcontinent. The foundations of a fragile unity were torn asunder and two newly independent and diminished countries – India and Pakistan, set out to chart an uncertain future through the bloody rubble of partition.

In time, Kapoor died trying to keep his theatre from financial ruin, and the Royal Opera House closed down and fell into disrepair. The moral of this story, like the moral of most stories, might have been – ashes to ashes, dust to dust - except Deewar’s legacy has risen from the ashes like the proverbial phoenix.

After Kapoor’s death, his son Shashi Kapoor and daughter-in-law Jennifer Kapoor resurrected Prithvi Theatres and gave it a permanent home in Juhu in 1978. Meanwhile, the Royal Opera House reopened after extensive renovations in 2016. These two otherwise unrelated developments engendered a serendipitous event.

In its 40th year, the annual Prithvi Theatre Festival, that is now directed by Shashi Kapoor’s son, Kunal Kapoor, broke from tradition and opened not at the Prithvi Theatre but at the Royal Opera House. And, it opened with a revival of Deewar, on November 3, which happens to be Prithviraj Kapoor’s birth anniversary.

The original scripts were found, the archives on the performances were compiled, and theatre director Sunil Shanbag took on the mantle of revisiting the play – a task as noble as it is tricky.

How does one present a play that purports to stop a wall whose existence we now take for granted? Can one discount what is visible in hindsight when we look back at a moment in history? What does it mean to bring back a play 73 years after it was written, particularly one that was written specifically to respond to its own times? One option is to present it purely as a piece of history – to indulge the nostalgia of those who saw it originally and those who are curious to relive times gone by. Another is to reimagine it for our times. Shanbag’s production walks a fine line between these two approaches.

For the large part, he remains true to the original script but he also uses a classic Brechtian device to pierce the fourth wall – two of the characters in the play double up as narrators who remind the audience that they are watching a play written decades ago, and voice the quandary of reinterpreting a piece of work long after those who created it, and the reasons it was created, have passed on.

The narrators also voice a subtle critique of the script – of its emotional rather than intellectual approach to the questions at hand; of the romanticisation of India as a ‘happy family’ ignoring the caste hierarchies and communal fault lines that always existed and were merely exploited by the British for political and commercial gains; and the exclusion of the voices of the proletariat – the masses who bear the brunt of the decisions made by the elite establishment.

Its real relevance in contemporary India, however, lies elsewhere. Deewar was written to forewarn against those who were planting seeds of discord that would change the course of history forever, and those who were complicit in their designs. On both sides of the wall built in 1947 – as in many other parts of the world today, an aspect of that history is being repeated. We live in a world awash with political propaganda – a post-truth world in some respects, where channels to plant divisive ideas, anger, and hatred based on ‘fake news’ and manufactured history, are proliferating.

Hannah Arendt in Origins of Totalitarianism wrote precisely about the role of propaganda in fostering “a curiously varying mixture of gullibility and cynicism with which each member... is expected to react to the changing lying statements of the leaders.” She also identified that, “the result of a consistent and total substitution of lies for factual truth is not that the lie will now be accepted as truth and truth be defamed as a lie, but that the sense by which we take our bearings in the real world—and the category of truth versus falsehood is among the mental means to this end---is being destroyed.” As a result of this persistent gaslighting, both public discourse and political choices are increasingly being driven by irrational fear and bigotry.

In India, we stand at a crossroad where fault lines deepened by the partition are being further ruptured by an explosive mixture of communal majoritarianism, chauvinistic nationalism, and political polarization. And the walls that are coming up as a result of this are fragmenting the Constitutional idea of India.

Shanbag’s production of Prithviraj Kapoor’s Deewar makes you wonder what our fate would have been if the play’s warning had been heeded and India had not been divided. It should also make you think about what we as a society and as individuals can do to identify and tear down walls that are in the making at this moment in time, and what the consequences will be if we fail to do so.

Pragya Tiwari has written for, and edited several publications. Her area of focus is politics and public policy, and she is currently working on a book on the RSS

Theatre will never ever lose its relevance: Ray Cooney

Long before its existence as the now iconic building of brick and mortar in Juhu, Prithvi Theatres existed as a traveling theatre company founded by Prithviraj Kapoor, the grand old patriarch of the first family of the Indian film industry, and perhaps more significantly - in the words of former Prime Minister Indira Gandhi - the “father figure of the dramatic profession in our country'.

Sifting through the archives of this traveling company is exhilarating and overwhelming – the cast of characters on his troupe; their performances for the high and mighty, and for the masses; the arduous and eventful journeys they undertook; their grit and passion to battle financial odds and keep the theatre alive; and, of course, the best part of theatre anywhere – the stories about what goes on backstage.

How does one distil the legacy of such a monumental life? By turning the gaze around, within oneself, and asking what it is that strikes the beholder the most while staring at the grand collage of this archive. The answers will differ – as they must, but what inspires awe in me is Kapoor’s commitment and ability to respond to his times fearlessly. His plays were wildly entertaining, thoroughly professional, but at the heart of it they were passionately spoken op-eds meant to cajole his audiences into confronting what he believed to be the truth, and doing what he believed was right.

Like Zohra Sehgal, one of Kapoor’s protégés put it, “Except for Shakuntala all the plays were inspired by Prithviraj, partly dictated, sometimes written and mostly added to in the form of extempore dialogue by Prithviraj. They were truly his creations, a product of his imagination, voicing his lament for injustice and the ills of his motherland and showing ways of rising above it all to a glorious future.” Sometimes his improvisations would go on and on – stretching the play from two to four hours. There was no stopping Kapoor until he had had his say.

Deewar, a 1945 production of the Prithvi Theatres, is one such case in point - the story of two brothers living together with their family and lording over a small kingdom where there is peace and prosperity because - as the older brother puts it - strife arises only where the toiling masses are exploited and not given their due, and where class divides translate into divides in means and opportunities.

One Diwali night two apparently weary travelers from a foreign land come into this family seeking refuge. Over time they ingratiate themselves to people around them, gain control over the lands of the brothers, and begin to export the best of the produce to their country in lieu of technology that increases agricultural yields. They isolate the poor from the landowners and encourage the exploitation of the former. They also establish their cultural dominance in the guise of educating the natives, and eventually drive a wedge between the two brothers – orchestrating an ill-fated partition of their home and lands, before returning to their own country.

The Royal Opera House, Churni Road, was renovated in 2016

As the first couple shows of DEEWAR in its revived form are under way at @MumbaiOpera today, we share a few stills from the original DEEWAR back in 1945 starring theatre legends Prithviraj Kapoor, Zohra Sehgal, Uzra Mumtaz and Sajjan#PrithviFestival 2018 powered by @bankofbaroda pic.twitter.com/oDEhjhLtOv