The play is based on a story by Mahasweta Devi, about the fate of a bonded labourer and his complicated relationship with his master 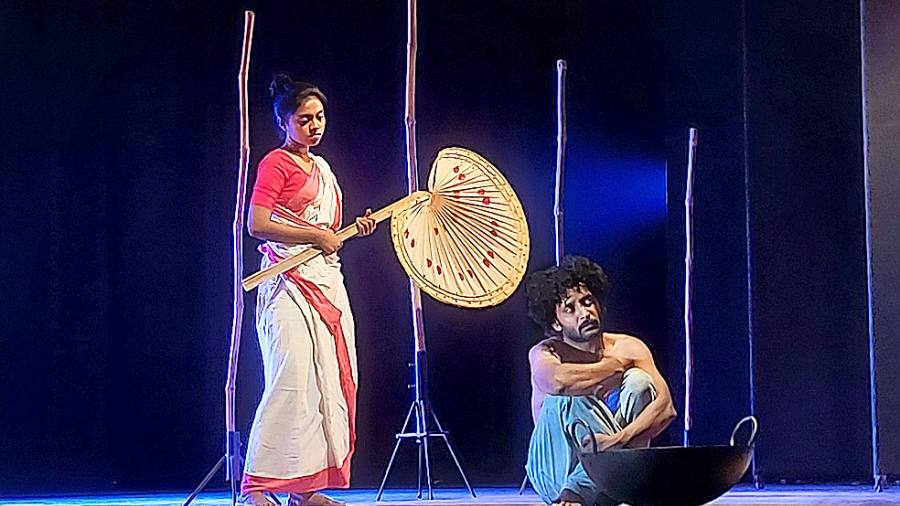 Krishnanagar, among the nerve centres of undivided Bengal, is slowly coming to terms with the changes that have swept over it. As far as performing arts is concerned, this town by the Ganges has traditionally been a seat of refinement. But the Covid-19 pandemic seems to have dimmed its sheen. As this reviewer visited Krishnanagar Rabindra Bhavan to watch Krishnanagar Panchajannya’s latest production, he had serious apprehensions about the outcome. Despite a double bill (Gobardanga Shilpayan’s Holmes-er Dadagiri was also staged), the auditorium was thinly attended. The buzz was clearly missing.

It was Azzir (The Slave Eternal), Krishnanagar Panchajannya’s latest work, that compensated for the disappointment with the attendance. Based on a story by Mahasweta Devi, about the fate of a bonded labourer (Pritam Chakraborty) and his complicated relationship with his master (Bhaskar Sen Gupta) and the young mistress (Riya Biswas) of the house, Azzir is a timeless tale of social injustice and exploitation of the working class that resonates till today. The director, Bhaskar Sen Gupta, who also dramatized the narrative, does not meddle with the backdrop. He works on the dialect, weaves a musicality around the drama, and achieves an element of dynamism otherwise missing in the plot. Sen Gupta adds an extra layer of sensuality by underlining the subplot involving the mistress and the labourer, alluding to D.H. Lawrence’s Lady Chatterley’s Lover. It is this weaving of patterns and mature handling of suppressed desire that make Azzir a compelling watch. The use of a cross-dressing male (Raju Dhar) with religious overtones appeared jarring initially, only to be justified as the play progressed.

The production design was sleek. Rajib Ghosh’s stage emphasised the barrenness of the land and its inhabitants suggested by bamboo poles located at strategic positions. Subhankar Dey’s employment of side lights added to the mystery. Sen Gupta took the acting honours — a restrained portrayal mixed with his mastery of music that Kajal Moulik employed so organically. The rest of the cast needs more insight into the roles they play