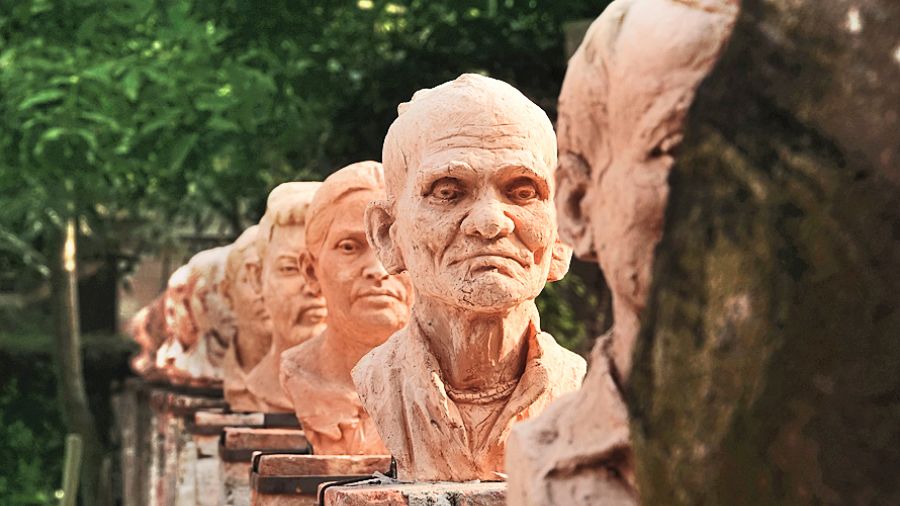 In an obscure village in Bangladesh — as late as in the mid-1970s — a little boy would scratch on palm leaves to practise writing Bengali letters. His first lesson in ‘etching’, so to speak. Shortly afterwards, when his family migrated to West Bengal and poverty drove the guardians to leave the boy in a home, he was ‘etching’ again, diligently scratching his name on a cheap aluminium thaali to claim possession of the only item the child could own, apart from his trunk.

Cut to March 2022, in Sarsuna near Calcutta. Bhabatosh Sutar, 48, held his first solo show, Ujjapon — The Celebration — on the sprawling premises of Chander Haat. He had come a long way from those early days. But the battered thaali was included in the show, symbolising a Dickensian universality in a lone child’s contentious relationship with the world around him as he gropes for his identity.

And now, the world around is what Sutar draws his creative sustenance from. He seems to suggest in his statement, engraved on stone, that life must transcend the self to celebrate a “common ground” with the community through art that’s not confined within a white cube.

Yet, the realist residing in the idealist warns of the visceral violence that a Confrontation can lead to.Within oneself and between individuals/groups. Two identical terracotta heads glared at one another across a fraught space. Connected to a motor, they trundled along rails crashing into each other, causing unforeseen damage to both.

It’s more comfortable, therefore, to bond with people, to fine-tune one’s receptors to the sensitivities of ordinary folk living their ordinary lives. That, perhaps, is what inspired the installation, Manusher Michhil (picture), a march of 65 terracotta heads, modelled on actual people of various ages. This pièce de résistance thus invited community participation in the very making of art. Placed on pedestals, with gaps in between — for these are Covid times, after all — each head was fitted with a recorder that replayed the story of each participant as narrated by himself/herself. The line of heads began from Sutar’s studio/office, continued through an opening made by breaking down a wall, snaked across the grounds, and into the home of a neighbour, breaching his wall as well. While there’s a dark underside to the work that refers to the countless lines the disadvantaged must patiently wait in, there’s also the stoical self-assertion that gains strength from and has faith in numbers.That, according to the artist, is how “religious iconography is replaced by a political movement”.

But how much difference is there between the two? A video of an earlier work alludes to the obeisance demanded by whoever’s in authority, whether religious or political. But when a Chair, a metaphor for power, genuflects before nobody in particular, does it reflect the humbling of authority? Or how, in the ultimate reckoning, it’s the cosmic void one must bow before?

Monochrome photographs of a naked man conjoined to a gnarled tree trunk (Breathing and the study of relationship between matter and mind) interrogate the anthropocentric arrogance at the heart of civilization which uproots trees to generate junk that weighs down the bent feet of toilers (Formula to convert mass into weight). This is progress that disembowels the earth for ores used and discarded in a parable of cyclical want and waste (Eros).

But all finite ambits — the individual, his community, mind and matter — were transcended in a striking, pantheistic denouement. In a dimly-lit room, high above the heads of viewers, was a canopy of thick straw, heaving like a mammoth, slowly pumping heart, to a low, background hum. And that felt like the embrace of a sentient universe.