Veterans performed with youngsters in this three-day festival of tribute 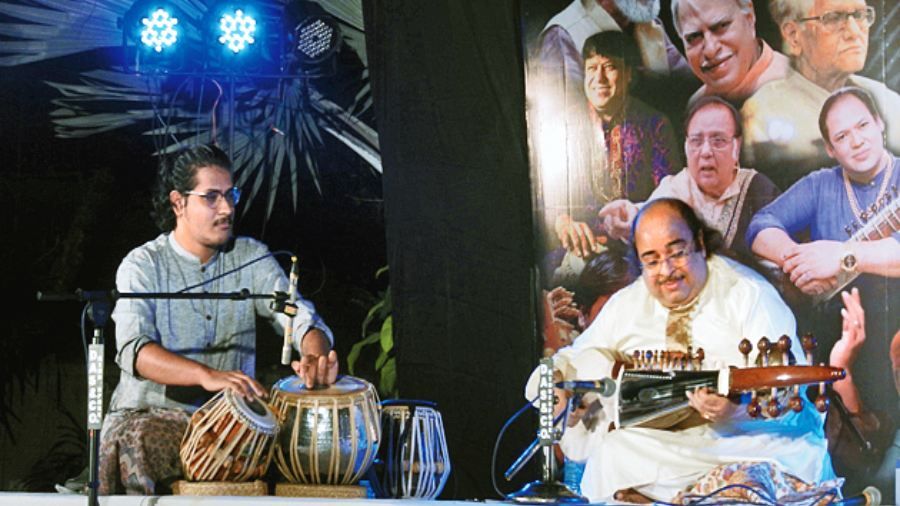 Sangeet Piyasi organized a tribute to the doyens of Indian classical music who passed away during the pandemic at Daga Nikunj, Calcutta. Hearteningly, it used this platform to showcase the talent of the next generation, many of whom lost their parents during the pandemic and are now preparing to carry on the musical tradition handed down to them. The three-day festival was structured in a way where veterans performed along with young artists — this was an innovative way of paying respect to the departed musicians. Adhiraj Chowdhury played the sitar with support from the senior percussionist, Akram Khan, on the tabla. Twelve-year-old Adhiraj presented alaap and jod, continuing the madhyalay and drut gats in teentaal. He maintained both clarity and melody throughout his performance.

Saptak Chatterjee — son of the vocalist, Sarathi Chatterjee — sang Puriya Kalyan with Parimal Chakraborty on the tabla and Jyoti Goho on the harmonium. In both the vilambit and drut kheyals, Saptak was somewhat methodical in the vistaars and taans; but he tried his best. For Archik Banerjee, it was challenging to accompany a senior artist like Tejendra Narayan Majumdar on the sarod (picture, right). But he did justice to the performance. Majumdar played his favourite Raga Basanta Pancham and set the mood with his beautiful alaap. For the gat, the artist chose Raga Jhinjhoti and created a soulful mood. He concluded his performance with a dhun in Mishra Khamaj.

The flautist, Indrajit Basu, chose to present Puriya Kalyan, rendering the gats in different tempos, followed by an alaap with Samir Nandy on the tabla. He concluded with a dhun in Mand. Mashkoor Ali Khan brought out the core attributes of Raga Maru Behag in his vocal recital with Bilal Khan Salonvi on the tabla and Gourab Chatterjee on the harmonium. The artist took some time to capture the essence of the raga, but was spontaneous when it came to the vilambit and drut kheyals. The rendition of a tarana in Bhupali was arresting.

Anindya Chatterjee’s solo tabla presentation was a captivating and enjoyable experience for the audience. Hiranmoy Mitra’s efficient accompaniment on the harmonium made the performance vibrant. The act by the tabla ensemble comprising Arkadeep Das, Suprabhat Bhattacharya — followers of the Benaras Gharana — Anjishnu Mukherjee and Koustav Das — followers of Farukhabad Gharana — was praiseworthy. The presentation of various items based on teentaal was well-coordinated and rhythmic. Sahana Banerjee’s sitar elevated the evening’s mood with Raga Shree; Prangopal Bandyopadhyay accompanied her on the tabla with great care. She evoked a calmness with the alaap, jod and jhala. But she could have chosen a raga other than Yaman to keep up the spontaneous flow of her performance intact. She concluded with a dadra in Mishra Pilu.

The senior vocalist, Amiya Ranjan Bandyopadhyay (picture, left), commenced with Malkauns and presented vilambit and drut kheyals mellifluously in three octaves, especially in the taans considering his age. Gobinda Chakraborty on the tabla, Suvrokanti Chatterjee on the harmonium and Sarwar Hussain on the sarengi provided able support and enhanced the energy of the performance. The hard work put in by Samar Saha and Madhumita Saha to make this three-day musical event successful — especially at a time when the third wave of Covid-19 is yet to completely abate — must be lauded.