Many unique stories to tell: Bengali theatre outside Bengal

THEATRE: Bengali drama competitions are a league of their own 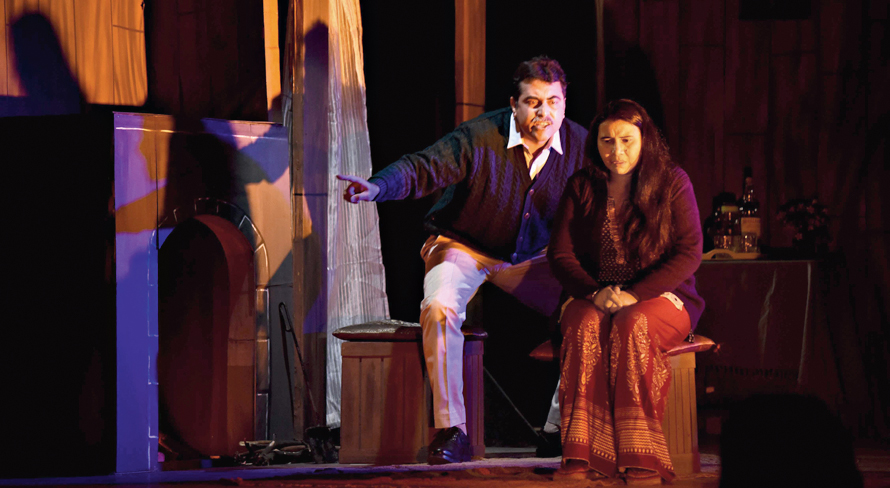 A moment from Amra Kajon Drama Society's 'Bhoy', put up as part of the All India Bengali Short Drama Competition, or the National Theatre Festival, organized by the New Delhi Kalibari in association with Sangeet Natak Akademi and Circle Theatre Company.
Shanker Chakravarty
Anshuman Bhowmick   |     |   Published 20.06.20, 02:26 AM

Bengali drama competitions are a league of their own. Those organized outside West Bengal and with a decidedly pan-Indian vision have their own unique stories to tell. Such annual events not only celebrate Bengali drama of various lengths, but also help consolidate the presence of Bengali people in not-so-favourable terrains. Among the most significant, the Bengali Club Lucknow, the Allahabad-based Lukerganj Club and the Silchar-based Rupam have come a long way.

In the national capital, the All India Bengali Short Drama Competition, aka the National Theatre Festival, organized by the New Delhi Kalibari in association with Sangeet Natak Akademi and Circle Theatre Company, has survived all odds. Twenty-four groups participated in its recently-concluded 13th edition held at L.T.G. Auditorium (March 2-8), reflecting upon varying degrees of artistic accomplishments and aspirations of proscenium theatre practice by the Bengalis. With West Bengal dominating in numbers, five groups representing Delhi and Chennai completed the picture.

Considering the little scope for theatre in downtown Chennai, Prabasi Sarathi’s Jiban Jerakam did not fair badly. The manner in which this coming-of-age play explored the middle class life in a typically Bengali household, and the sincerity it showed in understanding a daughter’s dilemma and the violence within the domestic framework, were commendable. But the inexperience was evident, both in production design and on the acting front. In the absence of recorded music, they roped in a keyboardist to provide a background score from the right wings. The decision failed.

The Delhi groups looked better equipped. Chenamukh’s Gandhajale, based on a Manoj Mitra script, lacked finesse. One expected better detailing and definitive portrayals in a drama rooted in lower-middle class reality. Some groups remained true to the standard drawing room drama and showed ample sympathy for the senior citizens. Karol Bagh Bangiya Samsad’s Sadar Darja tried to underline the isolation of the elderly father from all the decision-making exercises, including the fate of the house that he had built. The set, suggestive of a north Calcutta bylane, looked adequate. However, the sluggish drama could not sustain itself, and the cardboard characters and the sudden turn of events played spoilsport. Bengalee Club Kalibari’s Aandhar Periye found an elderly couple caught in an unending wait for the NRI son who cares a little as they struggle to come to terms with the death of their other son in a proxy-war skirmish. It was a mature act. Tarun Das, who played the domestic help without words, was a scene stealer. Sudip Biswas balanced strength and vulnerability in the father’s role and Tarumita Das played the mother with understated dignity.

Delhi’s fascination for the army surfaced yet again in Theatre Platform’s Agnatabas. The director, Purnendu Bhattacharya, must have a tried time editing the dense Harimadhab Mukhopadhyay script to fit the 70 minutes stipulation. But it worked. Bhattacharya, playing the retired secret agent who returns home after several decades much to the bewilderment of his family members, came off with a nuanced portrayal.

Amra Kajon Drama Society’s Bhoy was a cut above the rest. This whodunnit, set in a hill station, is clearly inspired by European originals. J.B. Priestley’s An Inspector Calls readily comes to mind. One must applaud the director, Sandip Bagchi, for designing the right ambience where mind games could be played, interrogations could flow and dark motives were unmasked. Ranjan Basu’s lights helped. The lead actors, Robishankar Kar and Nivedita Sarcar, complemented each other with utmost precision, maintaining a psychological consistency all through.