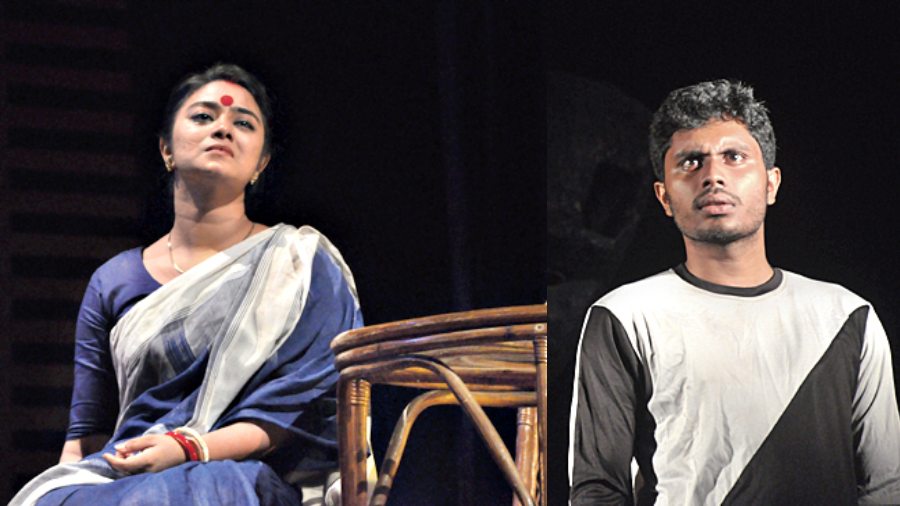 Rajshahi-based Anushilan Natyadal staged Nayak O Khalnayak (picture, right) on the inaugural evening. Scripted and directed by Malay Bhowmick, this production is a departure from the hagiographic dramas that swept Bangladesh on the occasion of the birth-centenary of Sheikh Mujibur Rahman. Spanning 80 minutes, the drama explored, through stimulating dialogue and rather naïve body language, the mechanism of manufacturing consent. Bhowmick’s experience was evident in constructing situations, often humorous, to hit home a point. But the inexperience of Anushilan’s members — mostly newcomers — came to the fore more often than usual. The choice of black-and-white costumes gave the production an insipid look. Two large masks that were hanging deep centrestage came alive in the final sequence when the actor playing Rahman broke into the famous lines of the leader’s March 7, 1971 address. This inspired act saved an otherwise verbose work.

On the 19th, Chittagongbased Kathasundar staged Khelaghar (picture, left), Sankar Basu Thakur’s adaptation of Henrik Ibsen’s A Doll’s House. Edited and directed by Kuntal Barua, the drama, set in the 1990s, dropped the doctor’s character altogether and overplayed the heroine’s psychological dilemma. The realistic set, lit brilliantly by Sudip Sanyal, was smartly utilised by Barua to design some intense moments. The dance sequences choreographed by Proma Abanti underlined the tortured soul of the heroine, Shima Chowdhury (Priya Moli), and the crucial scene on the rocking chair did more than expose the fractured marriage. Once again, the inexperience of the male actors showed. It was the heroine who shouldered the production. Rarely do we experience such a nuanced act in a lead role which requires the portrayal of a rational mind torn from within. A supremely expressive Moli kept adding layers to her portrayal.