I got my mind read by illusionist Alexander Magu 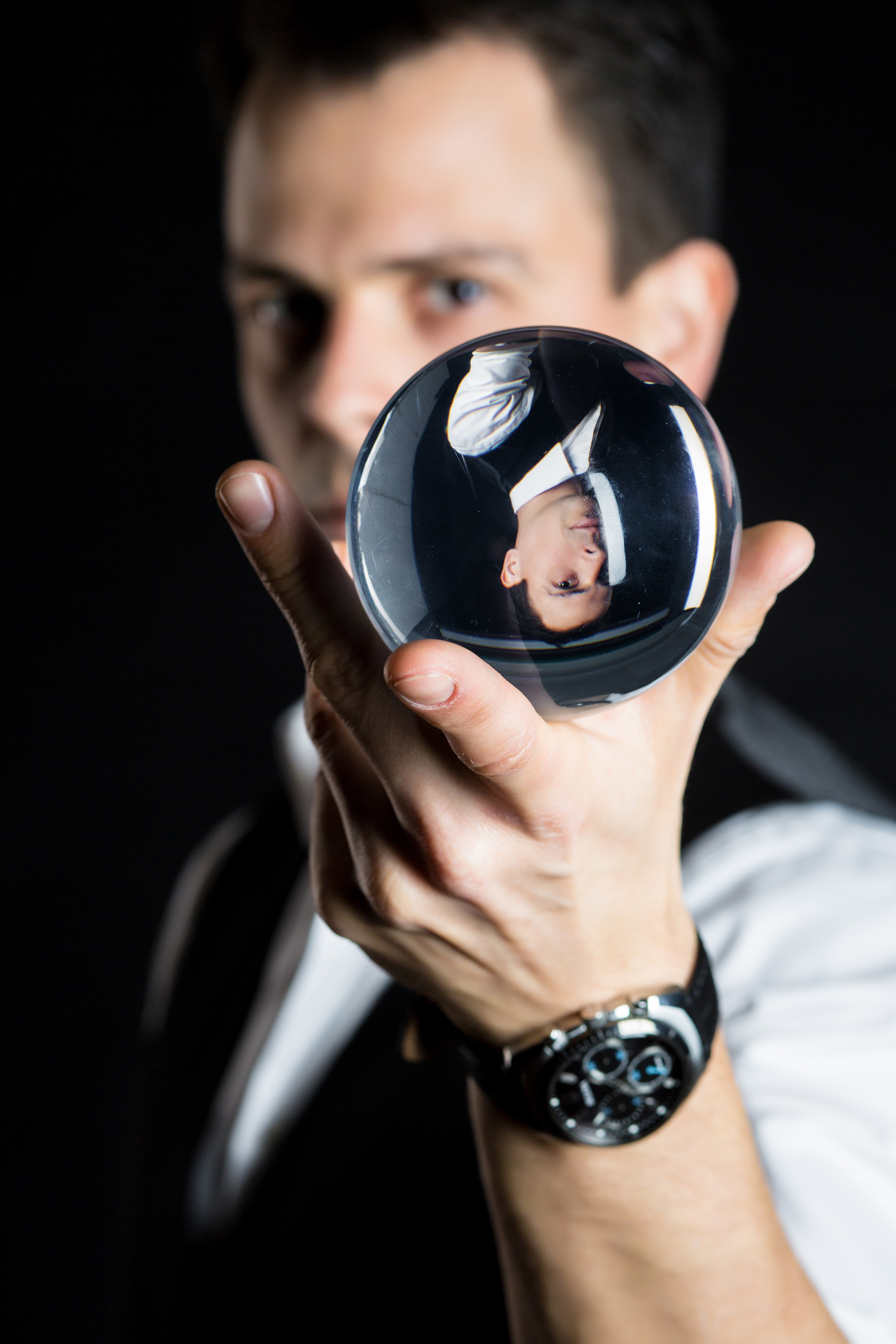 Russian illusion artist Alexander Magu is a Harry Potter fan and says that stories about magic are important because they make people believe that something impossible is possible
Smita Tripathi   |   New Delhi   |   Published 22.11.18, 06:18 PM

Magic is in our everyday life like the French pilaf. What I do are illusions,' says Alexander Magu casually folding an iPhone as my eyes pop out. 'Here, try it, it's a special Russian phone made of rubber,' he says, handing me the phone. Of course, it is not.

I hand the phone back to the Russian illusion artist who is in New Delhi for a show. As the phone somehow floats between his palms without his hands touching it, an involuntary 'woohoo' escapes my lips. Magu grins: 'Audience reaction is like a drug. It gets me high. All the tricks, all the illusions are just to see that reaction.'

Magu is a big Harry Potter fan and says that stories about magic are important because they make people believe that something impossible is possible. 'I showed magic to Daniel Radcliffe once. He tried to show me magic too but when he is not Harry Potter, he is not a very good magician,' laughs Magu.

Then he plays another trick on me. He asks me to think of a number between 1 and 100. I know he is going to try and read my mind. So I think of one number first and then change it to another. Magu hands over the phone to me and asks me to look at the last picture in his photo gallery. It's his selfie with a piece of paper and the number 49 written on it. The very number I thought of. I look at the time stamp. The photo was taken two hours ago. 'I predicted two hours ago that you will think of 49,' he says.

I have been with Magu for just about 20 minutes and I am pretty sure number 49 has not been mentioned. When I ask how he did it I get a mysterious smile in response. 'Sometimes I read your mind, sometimes I put the thought in your mind and then pretend to read it,' he says with a smile. 'Our consciousness is like a huge garbage dump. Everything stays there. But when I ask you to think about something, you always take it from the top of the heap.'

My mind races. What did he do to put the number there? He had asked me before to think of a number between 1 and 10 and I had thought of nine. But how did it become 49, especially because I had first thought of 42 and then changed my mind and said 49. Only Magu knows and Magu won't tell.

I can’t help but wonder about how many illusionists are around me, putting thoughts into my head. Isn't that what the political leaders are doing? Creating a fear among the majority population that they are under threat when there isn't anything like that.

But Magu is not one for the dark arts. 'There is a child in each of us. Magic brings that child out,' he says. Magu fell in love with magic at the age of 17, after seeing a card trick. He was so fascinated that along with university he started working in a trick shop in his hometown St Petersburg.

In 2005, he went professional and has since then performed in over 1500 shows. Disappearances and reappearances, levitation, telekinesis, gravitational illusions, predictions, mind reading and control are his professional skills.

He is currently practicing holding his breath for over 10 minutes. In the past, he has been buried alive for two days, has stayed in an ice box covered with crushed ice for nearly four hours before he passed out and is often seeing putting a needle through his hand without a drop of blood spilling.

'The stunts need regular practice. For instance, when I put a needle through my hand, there is a place in the middle of the hand where there is no blood, so I have to find that spot. The pain is, of course, still there even if there is no blood,' explains Magu, who admires other illusionists such as David Blaine, Derren Brown and David Copperfield.

Magu, known for his stunts, enjoys extreme sport. He consults with doctors and hires consultants to help him with them. 'When we are doing a TV show we decide beforehand what stunts I will do. Then I figure out what I can do and what I can't. If I can't do a stunt I hire a consultant to help me do that,' he says.

By now I am excited to see the show. We head to Upstage at the Roseate House in New Delhi's Aerocity, where Magu is performing until November 25.

Excited as we are, these tricks are just the appetiser. The main course, we will all savour for a long time to come.

Magu walks around the auditorium speaking to various audience members. He finally selects one man for the ultimate illusion but only after he has confirmed that the man doesn't have a heart problem.

This trick involves a Voodoo doll. The man sits with his eyes closed and Magu tells him to raise his left hand when he is touched on the left side and right hand when he is touched on the right side. Magu then touches him on different sides and the man raises his hand accordingly. After a few times, Magu stops touching him and instead touches the Voodoo doll. The man continues to raise his hand left and right. 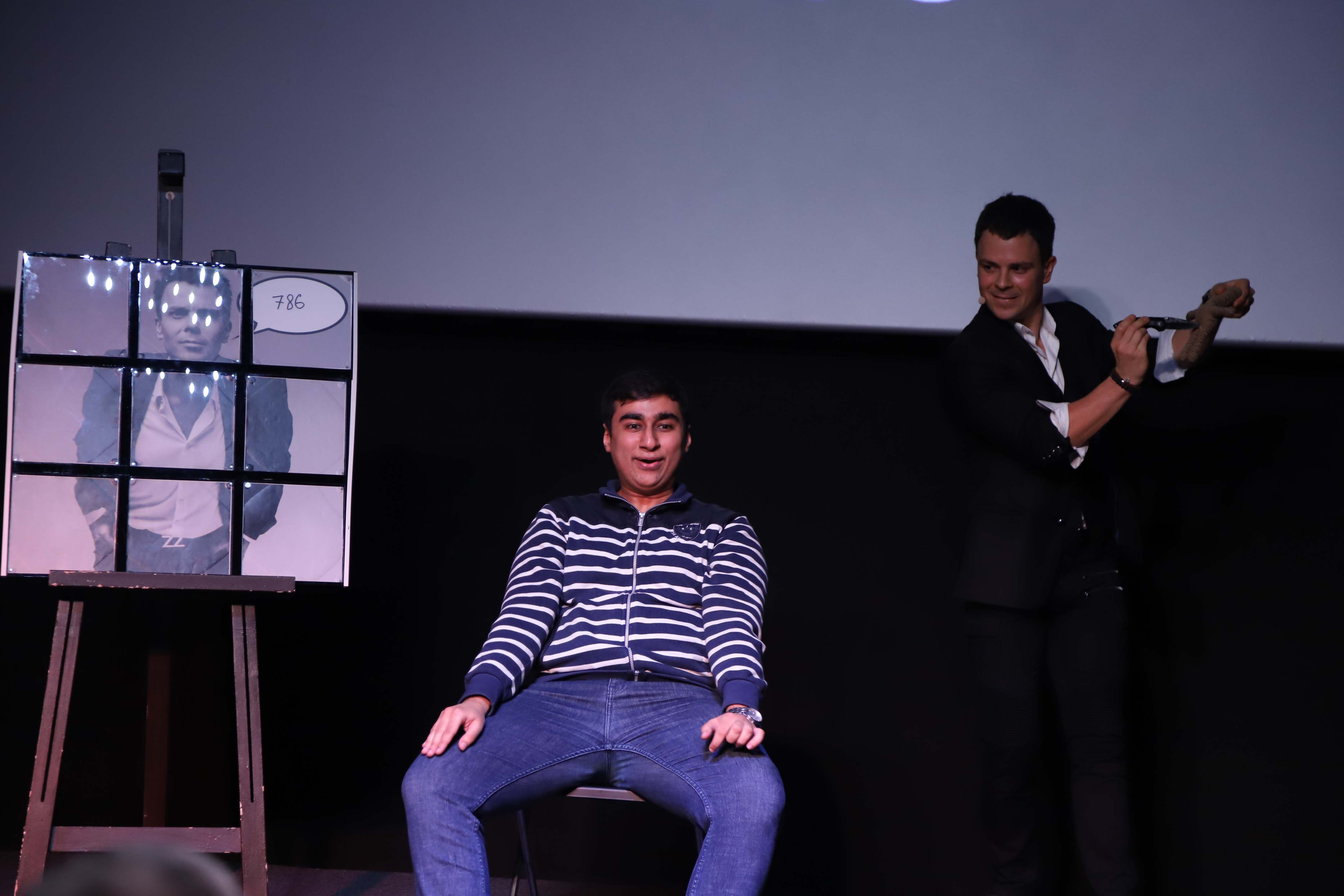 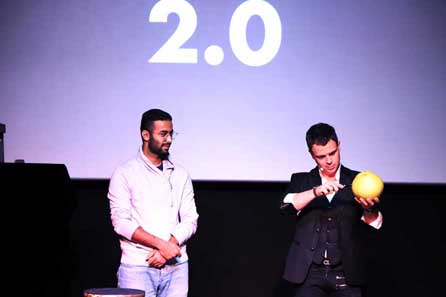 Magu on stage with an audience member. He cuts a melon to reveal a lemon inside 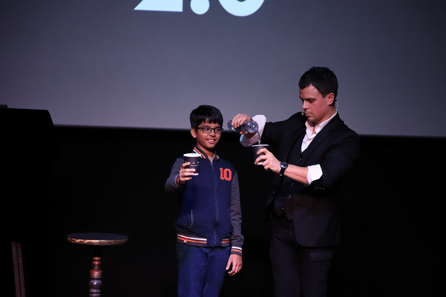 Alexander Magu is performing at Upstage at Roseate House, New Delhi till November 25

Magu starts his show by saying that true magic is love, family and friendship, everything else is an illusion. And then he goes on to surprise all of us. An audience member is called on stage and asked to pick a card and think of a favourite fruit. He is then handed a bag which is supposed to have the said favourite fruit. The bag has a melon. The audience member says he thought of a lemon. The audience laughs, Magu looks confused and grins sheepishly. But then he pulls out a knife and cuts the melon, and lo and behold it had a lemon inside it. The audience gasps audibly and Magu, the showman, cuts the lemon in half to reveal a folded card inside it. It's the same card that the audience member had pulled out.

By now the audience that has paid Rs 2,500 per head to see the show is convinced that there is more in store for them than Magu pulling a rabbit out of a hat. They will get their money's worth.

Unlike other 'magicians', he doesn't use huge equipment and props on stage. The few props used are all everyday objects.

He shows us a cushion shaped like a Rubik's cube on the stage. Meanwhile he hands over two Rubik cubes to two members of the audience and asks them to try and solve it. They both struggle with it for a while and then hand it over to Magu. Magu then shows the Rubik's cubes to us. No, they haven't been solved. But they are identical. Of the 43 quintillion combinations possible, two audience members sitting on two ends of the auditorium end up with the same combination. And if that hadn't shocked us enough, Magu shows us that the Rubik cube cushion and the two Rubik cubes are also identical! 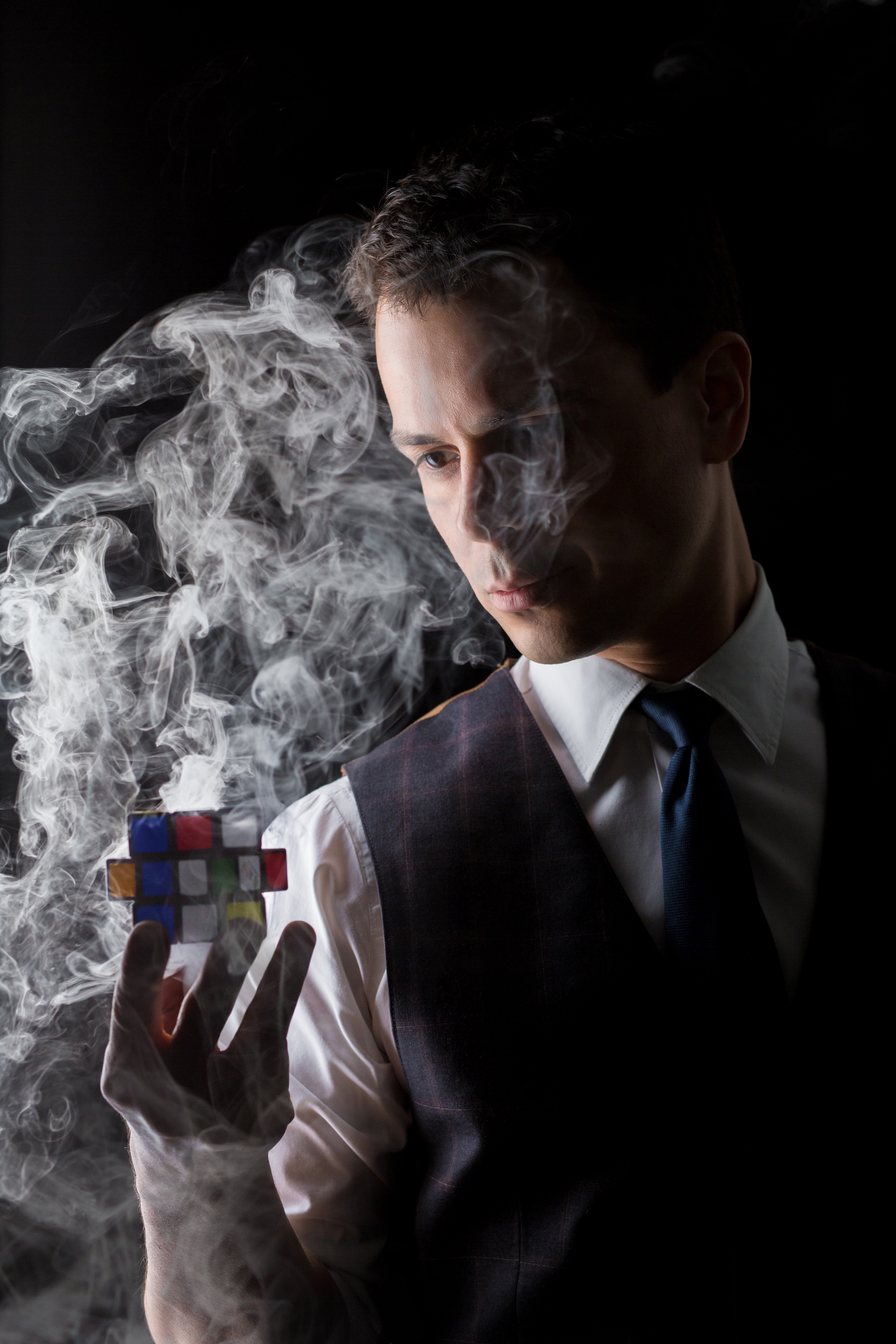 Magu has performed over 1500 shows across Europe and America

He then invites my son to join him on stage. For an 11-year old having grown up on a healthy diet of Harry Potter and Percy Jackson, this is a golden opportunity. Magu pours water into two glasses and hands over one glass to my son while holding on to the other. He asks my son to copy him. So while Magu dances around with his glass of water, my son does the same. He includes many such comic elements to the show. He drinks the water from his glass without my son realising it. He then upturns the glass on his head and asks my son to do the same. We all laugh. My son, though a little apprehensive, does as he is told. I don't think I will ever forget the look of sheer marvel on his face as not a drop of water falls on his head. When he looks into the glass, the water is frozen. 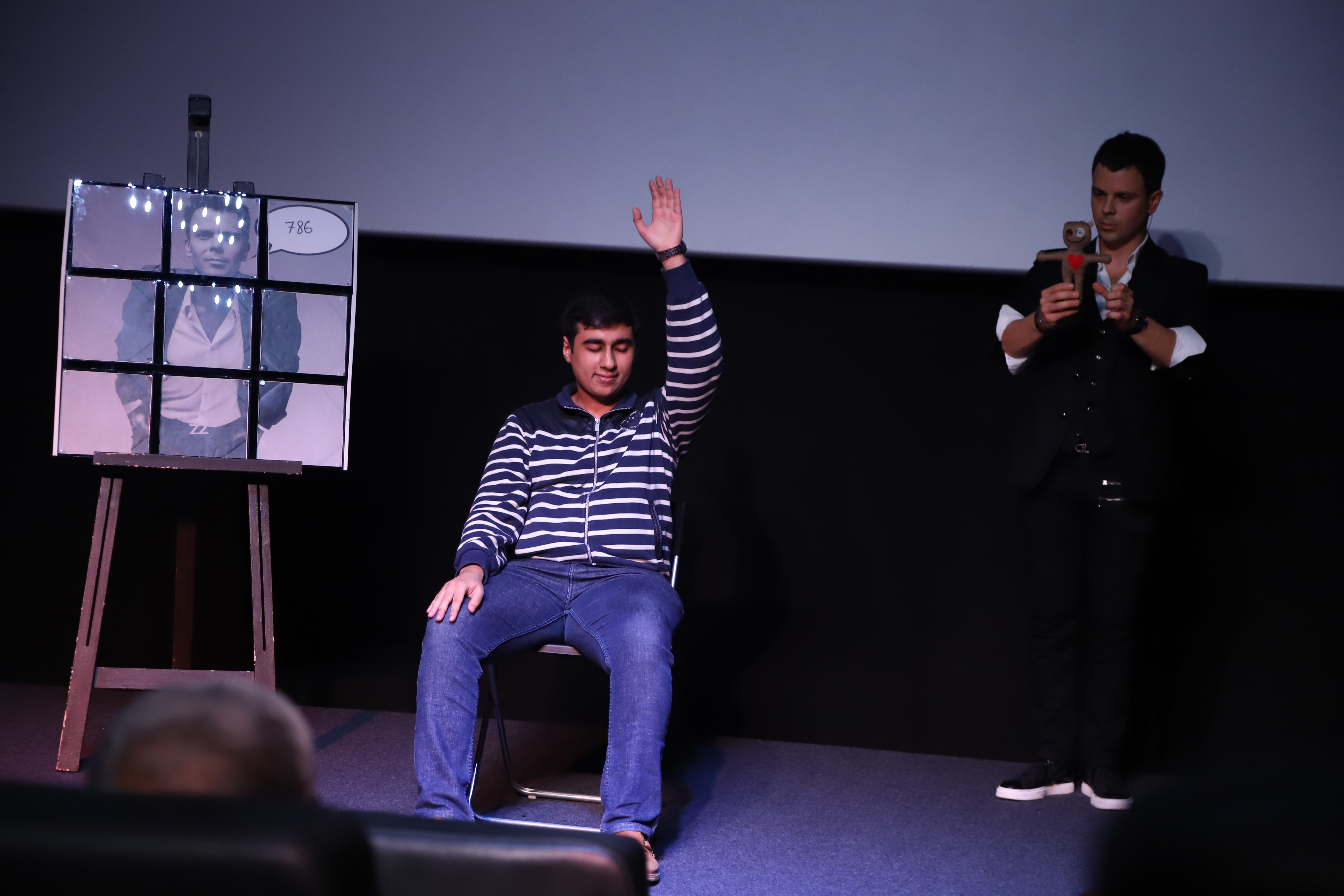 Magu conducting a trick with a Voodoo doll

Magu then asks him to open his eyes and make fists of his hands. Standing right behind him Magu lights a flame below the Voodoo doll's left hand. The audience gasps but the man on stage is unfazed. Probably a bit surprised with our reaction but in no physical discomfort. Magu then asks him to open his fists and there is a black ash mark on his left palm. To say the audience is surprised is an understatement.

But Magu has saved the best for last. He pulls out a knife and pokes the Voodoo doll in the butt. The man sitting on stage, blissfully unaware of what is happening, jumps from his seat as the audience bursts out laughing.

Magu, always the showman, takes a bow as he leaves the stage.