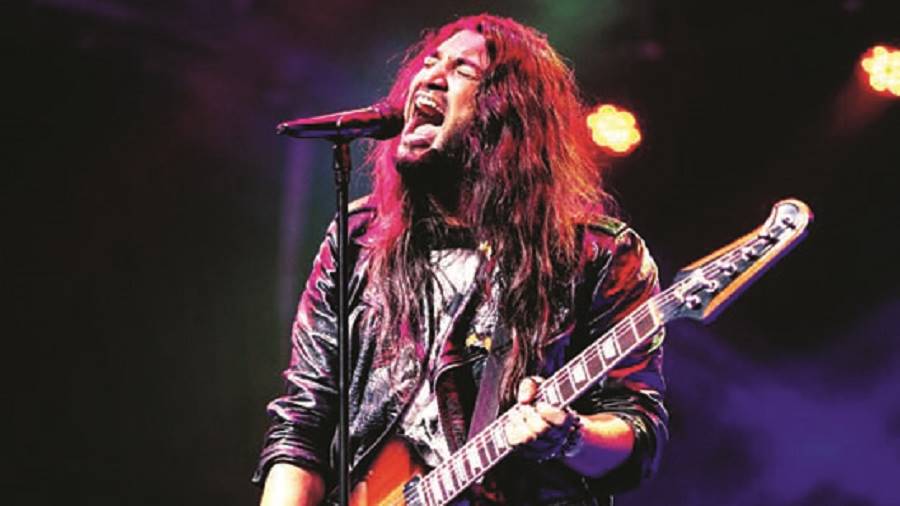 How often does one get to live their dream of performing with their favourite musician? For Girish Pradhan of Girish and The Chronicles, it
was a dream come true. The Bangalore-based musician has teamed up with former Lamb of God and Megadeth drummer Chris Adler with their new venture, FirstBorne. The heavy metal band also includes former bassist of Megadeth James LoMenzo and Myrone on guitar. The band launched their first self-titled EP on June 19, which was also the date that Lamb of God released their self-titled album. Hmm!

The Telegraph caught up with Girish for a quick chat.

Chris Adler and you got together for a workshop last year but how did FirstBorne come about?

During our performance in Bangalore with Chris Adler last year, after the show and at times during rehearsals he made me listen to this new project that he has been working on. He told me he was collaborating with friends and mentioned that it was Myrone (on guitar) and James LoMenzo (on bass). Then he asked me if I was interested to try-out. I said: “Sure, of course.” I went home and I started recording some takes on it. Seems like they really liked it! After our show in Hyderabad he sent me a text message and then added me to a group. Then we started talking and recording more songs… it was a fun thing in the beginning when we were trying to see where it goes. We actually have recorded a lot of songs but have just released five.

Would you say that you’re living the rock star dream, playing with musicians you listened to and seen live?

Oh yeah, that’s for sure because I really jumped up in joy when he told me he wanted me to try that track out (laughs). Of course, he was a legend from Lamb of God but at the same time, I was really drawn towards his work on the Dystopia album by Megadeth. I’ve been a huge Megadeth fan all my life and I actually sung some of Megadeath’s songs in shows last year. Now, here is the real person playing that song, like wow (laughs)!

We were discussing it and… well I’m just confused as to how this started (laughs). Maybe it’s something about him (Chris Adler) coming from a very groove metal kind of a background and me being from a hard rock, heavy metal, glam metal background. Myrone has his own genre. So FirstBorne was a good suggestion by Chris and it’s a ‘firstborn’ thing for us to venture into because we’ve never done this kind of stuff before.

Myrone
Sourced by the Telegraph

How long did you work on your first EP?

It started in November (last year). We had been working on a few demos but those songs are not finalised; we had just recorded them. It was in the last three or four months we got the idea about spreading positivity, spreading messages. Primordial is about how even though we are in this huge crisis, it’s a good chance for humanity to realise its mistake. The question asked in the song: “Are we really going to change? Is this going to bring about a change?” Our other song is called Anthem, which is about the chaos that was happening in our country before Covid-19. Everything was chaotic and I tried to convey a message saying that this has to stop right now and in the end, it’s the common people who have to come first.

With the lockdown keeping everyone indoors, how do you plan to work on your upcoming music?

Right now we share files, we send recordings and ideas to one another, we do video calls, Zoom calls, WhatsApp… we share everything we have in our mind, like a new idea for a song. And then we work and discuss it… it’s all pretty virtual.

What are these recording and files you’re working on virtually?

We already have a bank of another three or four songs plus a few more demos. We’re still working on some songwriting. So it’s coming up and we are going to release a lyric video for Roll The Dice on our YouTube channel. But our main focus right now is these five songs and then we’ll head to the next chapter.

Story behind the song

Hunter Hunted: It is about being a prisoner of your own. You might have this grudge or enmity with someone, or an archenemy. Many thoughts haunt you every day, so it’s a battle going on in the mind.

Roll The Dice: It’s actually death or a similar entity talking to you. The lyrics are about how no matter what you do, death is inevitable. It also represents this strength we have inside to survive.

Apocalypse: It is like an aftermath of a war or something like it. Like in The Terminator there is a future… where everything is over and people are trying to survive. The song is about a similar situation but more related to stuff like pollution and now there is a small group of people confined underground and they can’t go out.