Ghoul shows up the horror we're headed toward

Netflix India launched its first desi horror series. We speak with the minds behind it 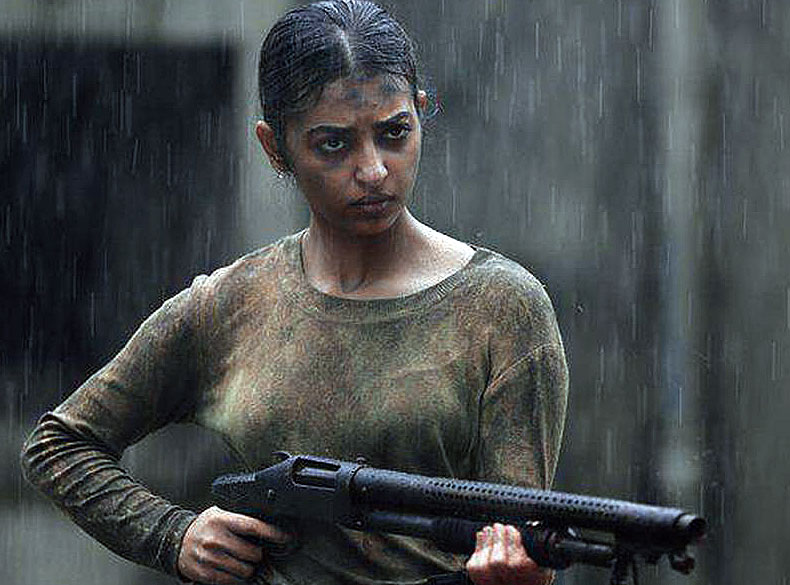 Following the runaway success of Sacred Games, Netflix India is launching its first desi horror series. Ghoul stars Radhika Apte and Manav Kaul, and streams from August 24. Set in a dystopian future, the dark series revolves around a covert detention centre, with Radhika playing a newly-minted military interrogator. t2 met Ghoul’s writer and director Patrick Graham and one of its producers, Vikramaditya Motwane, to know more about the show.

Before we talk about Ghoul, congratulations are in order for the success of Sacred Games. Did it exceed expectations?

Vikramaditya Motwane: Speaking for myself, yes, it did. I’m not sure what Netflix is expecting though. I’m surprised at how broad it has gone and how many people have binge-watched the show. And not film people, and typical binge watchers, I’ve got calls from friends about how their moms and dads sat with them and binge-watched the entire show.
Is there going to be a second season?
Vikramaditya: I certainly hope so.

Ghoul was born out of a partnership between Phantom Films, Blumhouse Productions and Ivanhoe Pictures, right?

Vikramaditya: Yes, the idea was to produce new-age horror content for India, and one of the first things we read was Ghoul. We really liked it and decided to go ahead and produce that. At a very early stage, Netflix got involved and once they had looked at some of the footage, they suggested doing it as a series. We thought it was a really nice idea, because a series allows you to give a lot more emotional depth to the characters, expand some of their storylines and make it richer.

What was the genesis of the idea itself?

Patrick Graham: (Laughs) I feel like an idiot every time I say it.

Did you dream it?

Patrick: YES! (Laughs) I saw it in a dream. I know it sounds ridiculous and I cringe every time I say this, but it’s true. This is the only dream I’ve remembered long enough to write it down. I was excited about the idea, wrote it down, made it into a presentation and pitched it to these guys.

This was meant to be a movie initially and was subsequently expanded into a series. What were the things that you had to change?

Patrick: We only really added stuff. We added backstories to each of the characters. While it was hinted at and spoken about in the movie version, having those extra scenes gave us a chance to expand and show people’s backstories, most importantly, Nida (played by Radhika Apte), and her father. Although there were some scenes between Nida and her father that you see in the finished series, we were able to flesh out their stories much more, and that forms the first half-hour. In doing so, we also expanded and built upon the atmosphere; it was honestly the best thing that could have happened to the story.

There’s precious little about you online. Would you tell us more about yourself and what brought you to India?

Patrick: This is my first major project. The only other thing of note that I’ve done was act in a series called Bring on the Night in 2011 on MTV India. I moved to India after graduating from London Film School. I found that there’s a lot more opportunity here, and much more energy and positivity that was absent in the UK at that point. So, I just thought that India was an incredibly attractive proposition and I’m glad I stayed.

What made you pick Radhika and Manav?

Patrick: The casting was very smooth. I was already friends with Radhika. As a first-time director of such a significant project, Radhika’s such a good choice because you know she’s such a strong actor; it was just great that we could get her on board. I’d seen Manav in Kai Po Che! but had never met him before and when he came in to meet, I thought he represented Da Cunha in a way that I had never thought of before. He brought a really interesting dimension to the role — he’s got a very silky charm about him and this wounded masculinity that he exudes in the performance. He brought so much to the role that I hadn’t expected.

As far as the rest of the cast goes, the only character that was in my mind from the writing stage was that of Laxmi. Ratnabali (Bhattacharjee) is a friend and I knew I wanted her to play that role.

Vikram, having worked on Sacred Games, were you tempted to get involved in the actual making of Ghoul?

Vikramaditya: I could guide Patrick with stuff like potential episode endings but it was more by way of suggestions — I’m not a fan of producers telling me what to do myself. It’s Patrick’s journey, nobody else’s. That’s what Anurag (Kashyap), Vikas (Bahl) and Madhu (Mantena) have done with me my entire life. They’ve given me my freedom but had my back. And that’s pretty much what producing is about — having the other person’s back.

The show touches upon themes of religion, censorship, nationalism and government control, which are all very current and relevant. Do you think this medium allows you to explore all those better?

Vikramaditya: There’s no censorship, so it allows you greater liberty and freedom to say the things you want to say, in the right sort of way. But I don’t think at any time we’re being subversive — it’s a piece of fiction, it’s a point of view. And while all cinema is political at some point of time, there’s no rallying cry for anything.

I asked this because there was a little bit of trouble with Sacred Games...

Vikramaditya: Yes, but that went away very quickly, once Rahul Gandhi tweeted. What gave me confidence after Sacred Games is that people get it. There are some people on social media going on about the language and nudity, but that’s about it. You can choose not to watch it, you can choose to look the other way. That’s exactly what freedom of expression is — if you don’t like it, turn it off or don’t listen. If you don’t like it, tell us why you don’t like it. If I can express myself, so can you and we can have a debate. But to ban and censor stuff is just ridiculous.

Given the current political climate, are you worried, Patrick?

Patrick: Yes, of course it forms a context for everything you do, but it’s not like we want to create controversy. The most important thing was to make something entertaining and engaging for the audience. It’s framed within a context that people might recognise but it’s in no way a direct criticism of any particular government or country. The dystopia framed in the story is a very generic dystopia, and it speaks generally of a distaste for nationalism, bigotry, victimising minorities.... But we’re not pointing a finger at anyone in particular.

Vikramaditya: You haven’t seen anything like Fahrenheit 451 or 1984, any of the classic dystopian books. It’s the same thing — there’s extreme nationalism, you have a massive amount of surveillance on your entire population, and certain things get banned. That’s been a trope of literature for a while, it’s nothing new that we’re doing. It’s just that we haven’t done it here before.