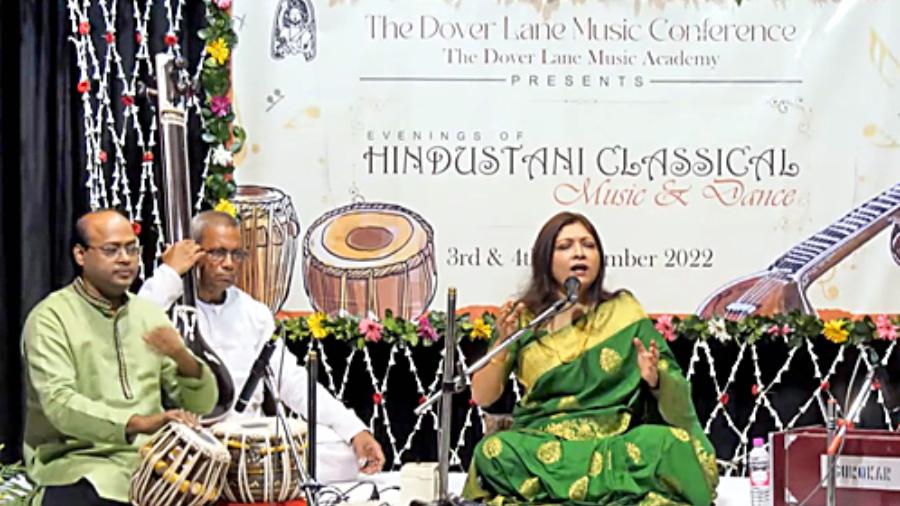 The Dover Lane Music Conference and the Dover Lane Music Academy presented a two-day musical evening at Birla Academy to satiate Calcuttans’ appetite for Indian classical music. The event also whetted the palate for musical festivities that are an inextricable part of Calcutta winters. The programme began with a striking Kathak recital by the Sonarpur Nadam troupe which was supervised and choreographed by Sandip Mallick. The recital was divided into several segments, each of which had a unique thematic variation of choreography and music. The depth of the performers’ talent was evident from the effortless and enchanting postures that they struck. The core elements that set Kathak apart — tatkar, gat and bhav, bols and parans — were imbued with different moods to suit the varied themes. They were also well organised. Artists such as Mondira Pal, Banasree Nandi, Sourav Pal, Meghamala Das, Samali Roy, Arindam Dalui, Chinmay Sikdar, Himali Roy and Risita Mondol deserve special mention for enthralling the audience with their craft.

The Kathak presentations were followed by a sitar recital by Soumyajit Pal. He played Raga Yaman, choosing a short alaap followed by gats. Soumyajit’s playing was careful and had the clarity that is required for the proper expression of this popular raga. Yet, a little more variation could have added an extra dimension to the performance. Bibhas Sanghai’s efficiency on the tabla not only supported the artist but also elevated the mood of the performance. Next came a vocal rendition by Sohini Roychowdhury (picture top) that was one of the biggest draws of the first evening. The artist commenced her presentation with Raga Maru Bihag. Her expertise was amply evident in the movements of keynotes. Moreover, the intricacies of Maru Bihag that Sohini expressed through her singing and brought out the essence of the raga perfectly in both the kheyals. The taankari and vistaars bore evidence of the depth and scale of the artist’s voice. She concluded with a thumri. She was beautifully assisted by Ujjwal Bharati on the tabla and Hiranmoy Mitra on the harmonium.

The second day of the soiree began with a sarod recital by Siddhartha Bose who played an alaap and a jor in Raga Jhinjhoti, followed by vilambit and drut gats in teentaal. Siddhartha was smooth and melodious throughout his rendition. While he took a little time to set the mood, once he had achieved that, he skilfully performed the alaap and the jor. Both the vilambit and drut gats were enriched by some original touches from the artist. Siddhartha was provided perfect accompaniment on the tabla by Arkodeep Das.

The highlight of the evening, however, was Atulan Atulprasad (picture), a special presentation by Riddhi Bandyopadhyay and her students along with Kumar Mukhopadhyay and Sougato Chattopadhyay, to commemorate the 150th birth anniversary of the doyen of Bengali music, Atulprasad Sen. An ardent lover of Indian classical music and a composer who expertly blended the agony of love and musicality, Atulprasad Sen will always have a special place in Bengali hearts. Riddhi and her students focused on famous compositions by Atulprasad Sen. The performances were threaded together with a well-organised script and narration — overall, it formed the perfect showcase for the great artist’s repertoire.

The programme highlighted the deep philosophical moorings of the life and works of Atulprasad Sen. Riddhi emphasised on compositions based on thumris, which reflect an influence of Lucknow, presenting both the original and Bengali versions. The style of presentation — both of the artist and her students — in the solos and the choral performances enchanted the audience. The rendition of “Se daake amare” bore the imprint of  “Bhavani Dayani” and “Pagla mon tare tui bandh” was clearly influenced by “Babul Mora”. Some other famous compositions like “Eka mor gaaner tori”, “Mora nachi phoole phoole”, “Bandhua neend nahi ankhipate” and “Ogo nithur daradi” were touching.