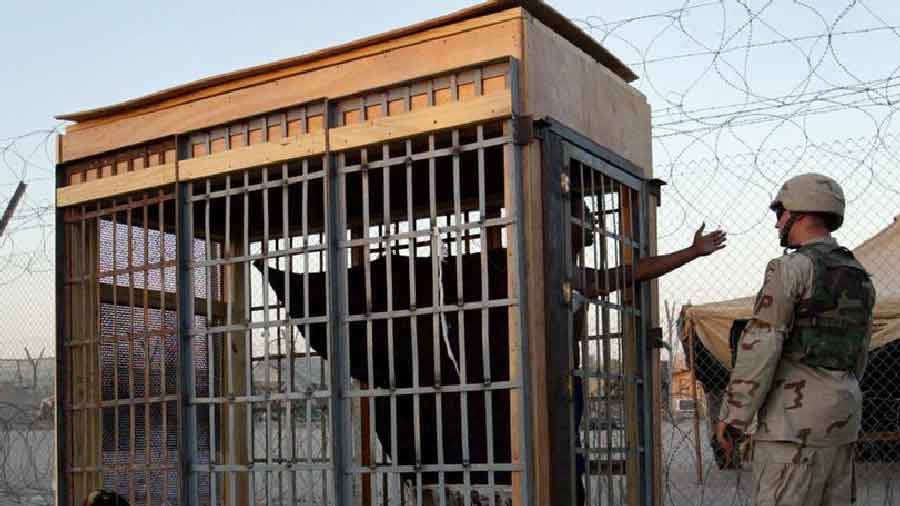 A French artist used the photos for an oversized artwork at the German art show. Reactions are divided with some critisizing it, while others praise it.

In an open letter, 16 signatories have criticized an artwork by French artist Jean-Jacques Lebel that is currently on display at the Hamburger Bahnhof Museum in Berlin as part of the international Berlin Biennale art show.

Visitors enter a room arranged as a maze of horror in the museum's Rieckhallen section where Lebel has hung huge photographs of tortured and humiliated Iraqi prisoners at the Abu Ghraib prison — pictures that were taken by the US soldiers who had tortured them.

Victims not asked for permission

Rijin Sahakian, who had loaned out one of the works showcased at the exhibition, is a signatory to the open letter that criticizes the Biennale's exhibition of the work for using "photographs of unlawfully imprisoned and brutally treated Iraqi bodies" under US occupation. They were used, the letter argues, for commercial purposes without the consent of the victims and without the feedback of the Iraqi artists participating in the art show, whose works were installed next to the controversial work without their knowledge.

At the time of publication, the curatorial team of the Berlin Biennale had not yet publicly commented on the allegations, but announced it will release a statement soon.

However Ihsan Jezany, a German-Iraqi photographer, cannot understand the criticism. "The artist wanted to remind us of what happened in Abu Ghraib, and that's a good thing," he told DW. "I believe such images should be shown, and if we hide them, we are only helping the perpetrators, not the victims." More so since the images have already been used by many artists and media around the world, Jezany pointed out.

Only way to stop abuse is to 'get rid of war'

The horrific images from Abu Ghraib used by Jean-Jacques Lebel at the Berlin Biennale are deeply anchored in collective memory. First published in 2004, they show, for instance, a man being tortured with electric shocks to his penis, and another forced to crawl naked on a dog leash. Abu Ghraib was a prison in Iraq where, under US occupation of the country, American guards cruelly humiliated prisoners and recorded their pleasure in doing so on videos and photos on their mobile phones.

Even 10 years after the first images were published, Seymour Hersh, the US investigative journalist who brought the incidents to light, said that what happened at Abu Ghraib could happen again at any time, even in the US military. "The only way…to get rid of these kinds of abuses is to get rid of war — and that doesn't look like it's happening," he told DW in 2014.