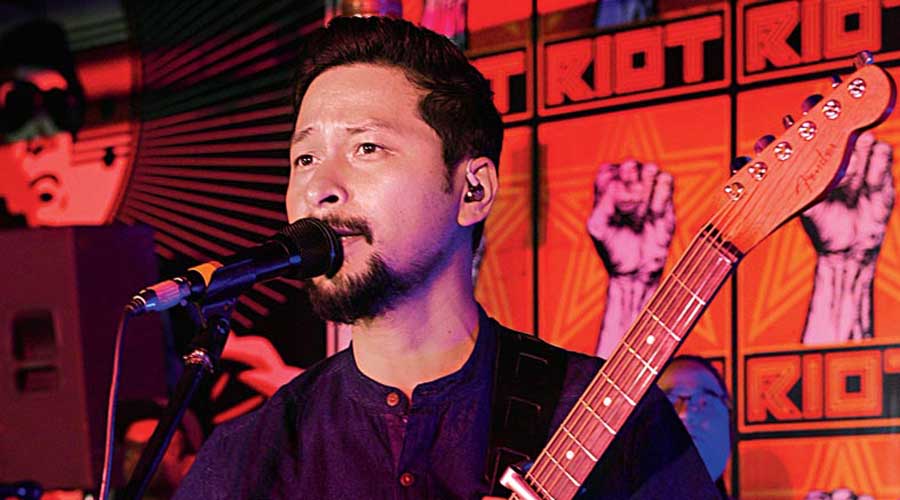 Bipul Chettri and The Travelling Band live at Momo I Am in Sector V, before Covid-19 struck
Rashbehari Das
Urvashi Bhattacharya   |   Published 08.07.20, 12:37 AM

Before the lockdown was announced, Bipul Chettri & The Travelling Band was in the city to perform at the Sector V outlet of Momo I Am. The independent artiste, currently based out of Delhi, originally from Kalimpong, made his name after uploading his song Wildfire (Dadhelo) on SoundCloud. There was no looking back as his debut album Sketches of Darjeeling appeared in 2014, followed by Maya in 2016. The singer-songwriter and the father of a young girl, also teaches music at Vasant Valley School in Delhi. Here’s what he had to tell The Telegraph.

How have you been keeping during the pandemic?

I am using this time to compose some new tunes... when I get some time after spending it with my family, especially our young daughter who keeps us on our toes all day.

We saw the Mann (at home) and Kahiley kahi (at home) videos. How did you coordinate the music and videos from your respective homes?

We recorded all our parts separately, using a fixed tempo, so that we would all be in sync and shot them while recording the audio. All the shots were stitched together into a video later. It was fun and also the only option to do something like this while maintaining social distancing with the band members. I don’t know if there will be more of such projects but one never knows.

What else are you currently working on?

I am currently working on a few new tunes which I will be sending out to my band members for their inputs after which we might go into the studios to record them, whenever the lockdown ends. The studio we usually work out of is currently shut so we haven’t been able to record anything new as such.

Sonam Sherpa was one of the first guitar players from our home town (Kalimpong) who made a name for himself outside the hills, which also helped pave the way for many others like me
Telegraph picture

Neela akash is beautiful and dedicated to the late Sonam Sherpa (of the band Parikrama). What did you like most about his musical skills?

Sonam Sherpa was from my home town and was also a senior in school. Both of us left our home in Kalimpong and came to Delhi to go to college and start our respective careers and family. I grew up watching and listening to him play at our school concerts and other music events in Kalimpong and he was a huge inspiration for most of the younger students from our school. He was one of the first guitar players from our home town who made a name for himself outside the hills, which also helped pave the way for many others like me.

Sonam Sherpa’s passing was a huge shock for all of us as we used to meet at each other’s places here in Delhi occasionally. Incidentally, the video for Neela akash was being shot when he passed away, so it was the right thing for us to do to dedicate it to the wonderful musical legacy he has left behind.

The lockdown has taken a toll on the music industry. What was your immediate response when the lockdown was announced?

I don’t think anyone expected it to be this severe. I am sure everyone thought it would be a temporary blip and things would return to normal very soon. But as one can see, it isn’t so. It is a difficult time for everyone but for performing artistes and event organisers even more so.

What do you think is the future for the music industry?

What I can personally say is that it is not going to be business as usual. There will be huge shifts in the way musical events would be organised and every artiste will be affected in some way or the other. So things do not look to be very promising at the moment. But one lives in hope.

It was through uploading Wildfire (Dadhelo) on SoundCloud that people started noticing your musical abilities. Do you think turning to online platforms and going live fits well during the current situation?

Online platforms, especially for independent musicians like us, have been a huge blessing in terms of reaching out to the masses, which was the monopoly of large music labels earlier in terms of their sheer physical distribution reach. That barrier has been completely shattered, which has helped indie musicians like us to reach every corner of the globe with little or no help from anyone.

Performing ‘live’ through these social media platforms has got its pros and cons but in the current scenario, it is the only option left for artistes. But what is more important to figure out is how the economics of it works out to the benefit of the musicians.

Let’s talk a little bit about you. You hold a LTCL (Licentiate of Trinity College, London) degree in classical guitar. When did you realise that folk music was your calling?

I took up Western classical guitar and studied it for over 15 years or so, wanting to be a concert recitalist and ended up with this degree. But somewhere along the way, I realised that I was not doing anything new in terms of musicality or something that resonated within me of who I actually was. I also do not know if folk music was what I deliberately attempted to do. It all came out naturally, which went on to be labelled as such.

How did the sound of folk music with a contemporary touch come to you?

You had once said: “I am not a star. I like to see myself as a working-class hero.” Why so?

This “star” business is a made-up formula by/for marketing people. I am just a regular person who happens to write and compose some music which a certain number of people enjoy. It’s as simple as that.

Do you still teach music in the school in South Delhi? How do you juggle your teaching career and music?

Yes, I am still a teacher at Vasant Valley School in New Delhi. I go to teach from morning to afternoon and do my music at home post that. It does get hectic but nothing that hinders either. Except that we are all working out of our homes at the moment.

What are some of the things you keep in mind when teaching?

Students need to be given all the freedom to express themselves in the arts as much as you would expect them to excel in other academic subjects.

For someone aspiring to be a musician like you, what are some of your tips?

Experience life to the fullest before you start working on your art. Your experience will eventually reflect and help you in the work you will end up doing. And no one is born talented, so practice.