What sets this festival apart is not just the curation but the model that it functions upon, that of crowdfunding 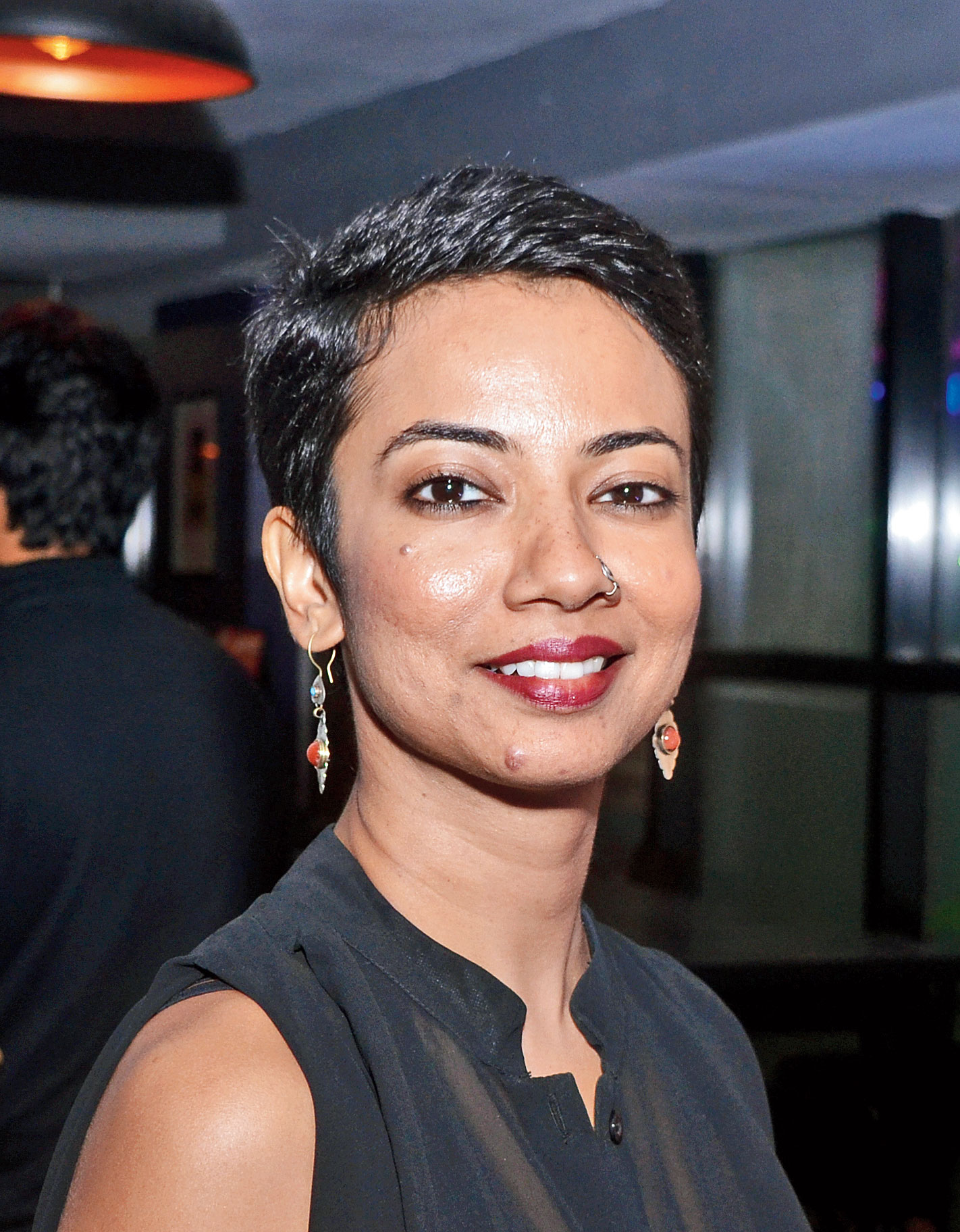 At the Still Point, an annual celebration of dance by Artsforward, was an experience so diverse yet intimate, it justified the cause they pursue — that of the giving back to the arts the undivided attention they deserve. What sets this festival apart is not just the curation but the model that it functions upon, that of crowdfunding.

Spearheading this festival is Paramita Saha who firmly believes that as a manager, the most fulfilling of all models is the crowd-sourced platform, for you end up interacting with patrons who are truly invested in the arts. The third chapter of At the Still Point, Strange Times, was held at Experimenter Outpost and TopCat CCU between November 8 and 10 and it played host to two vastly different shows — Diya Naidu’s Strange Intimacies and Satakshi Nandy’s Strange Fruit.

“Both the acts are responding to the changing times, in their own ways. So while there is one artiste who prefers to go inward and find secret, intimate ways to connect with a ‘stranger’, the other artistes talk about the harm that strangers are capable of inflicting upon you. Based on what kind of a person you are and what kind of situation you are in, both these responses are valid but we have to acknowledge that times have changed. That’s what we aim to do — bring out work that is not only edgy but also relevant to the times,” said Paramita. t2 experienced both the shows to tell you what you missed so that you don’t miss it again next year! 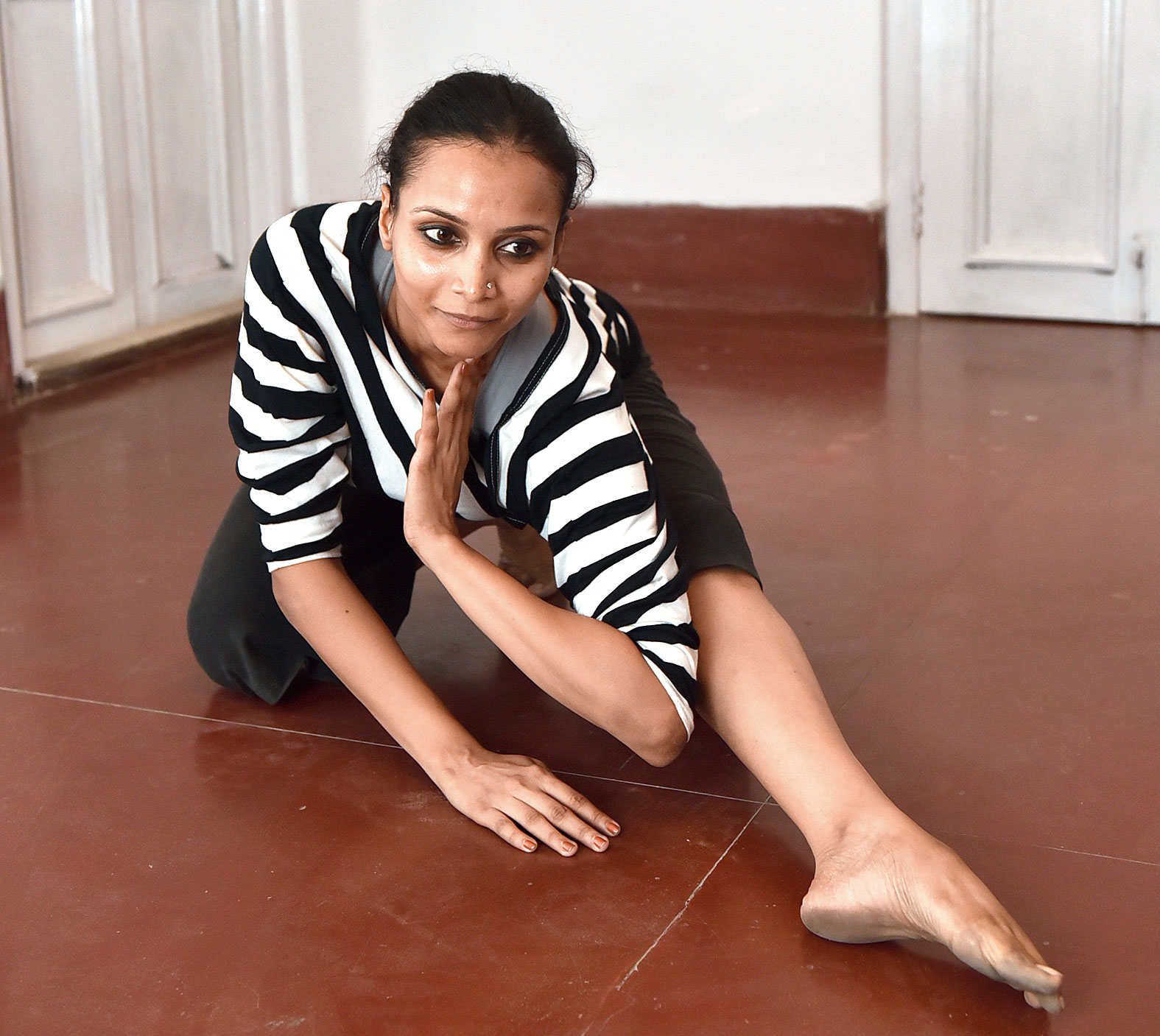 Strange Intimacy is an act that began four days prior to the allocated date when I was supposed to meet the artiste for the performance. I say “meet” for it was a show designed on a one-on-one format where the audience and the artiste are the only two people sharing a moment together. I received an email marked to a ‘stranger’ from a ‘stranger’ giving me thought starters that I had to choose from, which would later act as the icebreaker in our interaction with each other. These subjects ranged from something that was bothering me or I was thinking about at this point in my life to my relationship with divinity. The topics itself were so intimate that I immediately knew that my interaction with the artiste — Diya Naidu — was going to be of a different kind.

Armed with an intimate story that I wouldn’t mind discussing with a stranger, I showed up for my date with this performance. I was welcomed with an envelope which had my name on it and led to a room at Experimenter Outpost where I was asked to read the letter while waiting. I did.

The three-pager contained lines that were familiar for anybody who has, even for a moment, spent time wondering about “what would people think”. I could relate because I have been the writer of that letter at some point of time in my life while I have also been the one filling myself with these thoughts, at another.

A song emanated from somewhere in the background, which echoed off the walls of Experimenter while I read and soon I was introduced to Diya who sat across from me and started the conversation. We spoke and we spoke and then we spoke some more. She made me lie down and sat beside me as she, in her meditative voice, led me to relax every inch of my mind and body. We went for a walk outside to better connect with the sights and sounds outside after having done the same within the confines of four walls and through all of this, we continued speaking. I had long left behind the story I had set out to narrate to her and we had moved on to dangerous, unexplored territories of my mind. And that’s exactly what sets Diya Naidu’s Strange Intimacies apart from any such experience I may have been lucky enough to observe before this.

We came back to Experimenter and she asked me to wait alone while she prepped for the final and most important bit of the evening — the performance. She danced, she sang, she traced a connection between the earth, sky, fire, water and my pain and she told me my story back to me, albeit with poetry.

It is only through those moments that one comprehends the universality of our emotions. Human beings, as a race, have emotions that are as similar as they are unique and isn’t life about finding the commonalities while celebrating the uniqueness? We are, after all, strangers just as well as we know each other. I came back feeling lighter, armed with these thoughts and memory of a performance I wouldn’t forget anytime soon. 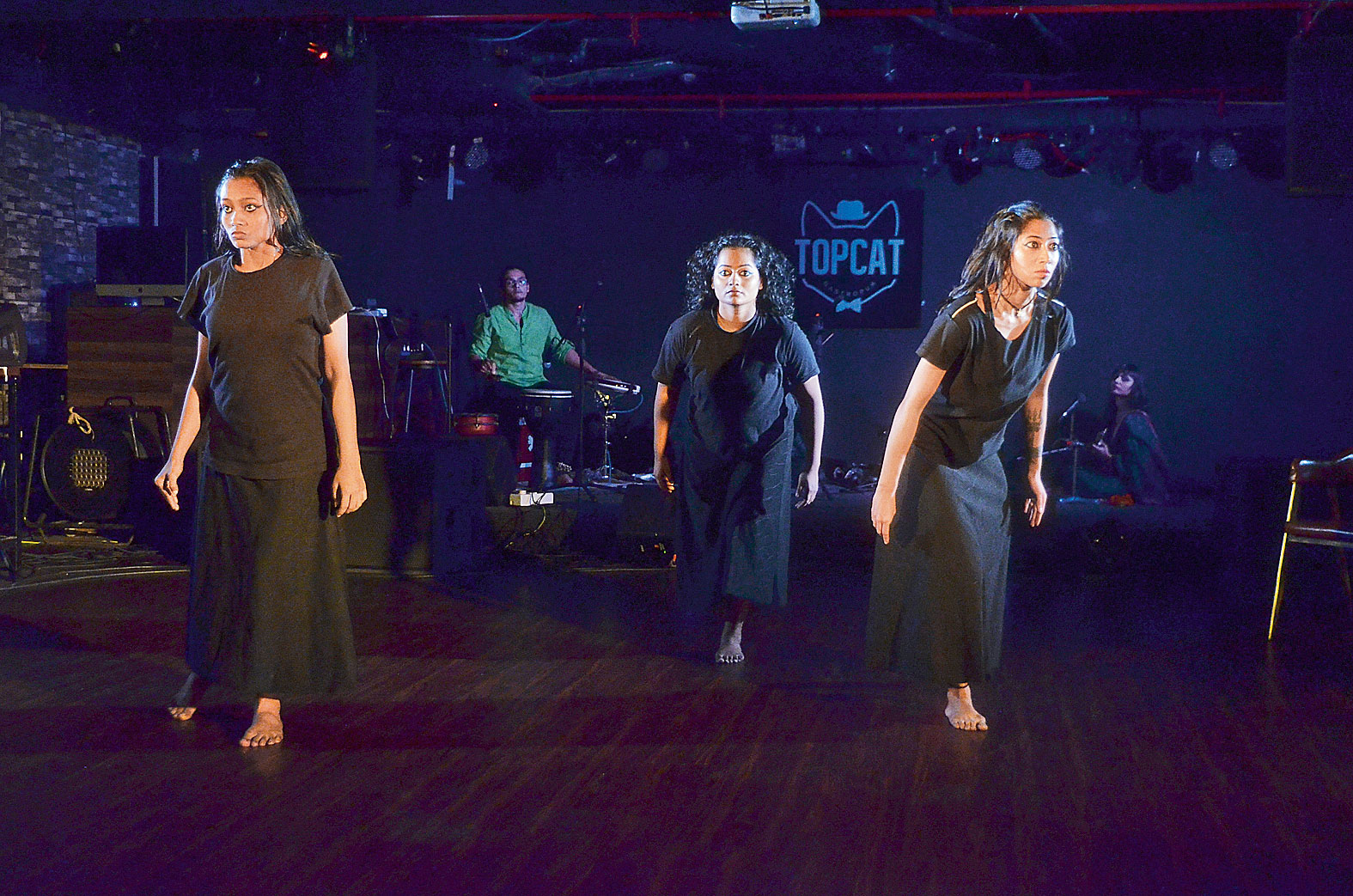 A scene from Strange Fruit

Strange Fruit is a dance theatre act that was born in Calcutta and has grown to be a 25-member outfit that tells the story of the oppressor and the oppressed through movements that seem as rhythmic as they are chaotic. Conceptualised by Satakshi Nandy, this act was performed to live music at TopCat CCU. The three-member ensemble comprised Satakshi, Sabita Kashyap and Priyamm Bose, while there was Agnitray Chakraborty on percussions and Dibyokamal Mitra who did a stellar job in contributing to the eerie ambience with their sound. “Art should comfort the disturbed and disturb the comfortable”, it is often said and that is exactly what this act did to highlight topics like rape, oppression of the minorities and other waywardness that afflict our current society. 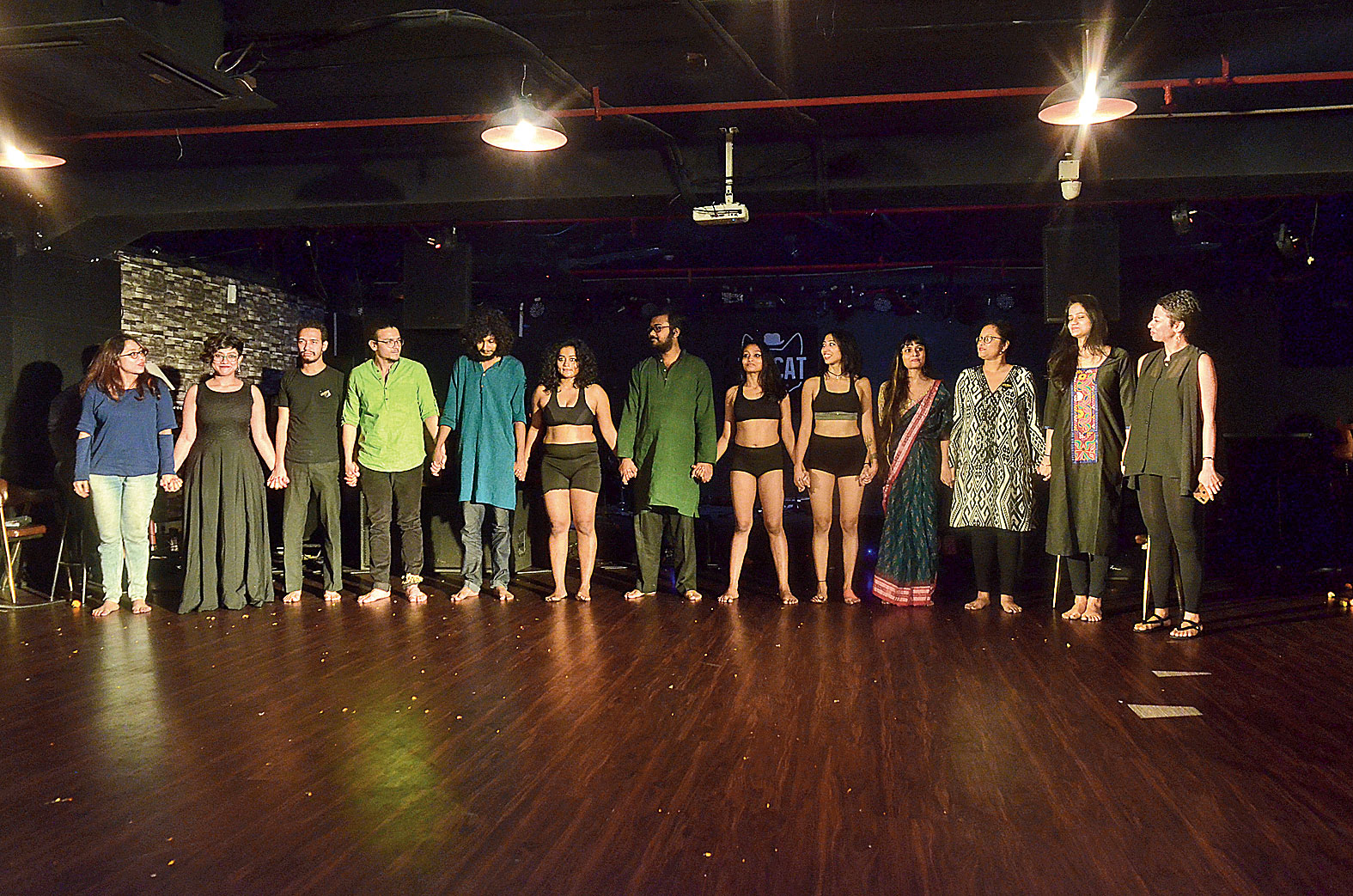 Power-packed in places and lacking in tempo in places, it managed to create the right air of suspense and disbelief that should grip the audience that is invested in the show. The music was stellar with beats that often highlighted the confusion that affects everyone around us. “What you see now is an evolved version of the solo performance that I had conceptualised back when the Dadri lynching had just occurred in our country. Now, as and when new people have joined the ensemble, the act has moulded itself to adapt to frustrations felt at an individual level by those people,” said Satakshi. Gripping in parts and morbid in some, this too was an experience that definitely deserved to be a part of At the Still Point, Chapter III.