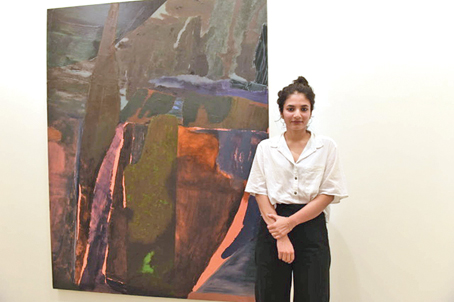 Biraaj Dodiya at the opening of her show Stone Is A Forehead at Experimenter, Hindustan Road, photographed in front of her painting titled Sirens
Pabitra Das
Anannya Sarkar   |   Published 21.04.20, 02:47 PM

I came across this poem (The Laid Out Body, a part of the poem Lament for Ignacio Sanchez Mejias by Spanish poet Federico Garcia Lorca) in which the poet was commemorating a friend’s death but there were these sort of very sensitive references to the body — body in action, body absent, body laid out… The phrase “stone is a forehead” was very moving because it immediately makes you think of both these materials. The syntax is off and the way I make paintings is also kind of similar — what happened first, what happens after, something is something else and these are very much a part of the paintings, in the way they are made,” explained 26-year-old Biraaj Dodiya when I caught up with her on the opening day of her debut solo show, Stone Is A Forehead at Experimenter, Hindustan Road, in March. It was interesting to note the use of the word “making”, while Biraaj spoke about her works, but the verb holds relevance to her work, which is an embodiment of her preoccupation with the physicality of materials.

“I have developed this way of making these paintings that allow me to feel freer when I know that things will go and things can come off and also the layering allows a richer surface for me. It kind of develops over time and almost becomes like an excavation site because it has that layered history with it — history of a mark or a certain image that sometimes appears and sometimes completely becomes a ghost of the original image. Those things really interest me and this kind of finer, tentative, shaken image that you cannot instinctively recognise whether it’s a landscape or abstraction — that moment of wavering interests me a lot,” said the Mumbai-based artist and the daughter of leading contemporary art practitioners, Atul and Anju Dodiya. On first glance, the said wavering between landscape and abstraction is apparent but one only needs to take a closer look to be able to perceive the rawness of each layer-upon-layer nuance that her works throb with.

The self-confessed Kanye West fan is not shy of letting pop culture or the happenings of the world around her influence her or her works. “One thing that I very actively think about, especially while making art, is that our generation grew up with camera phones and this easy access to the Internet — so what does it mean to be making paintings, which is an old and slow medium. I think I am attracted to things or processes that demand a kind of slowness and I appreciate that. Things like pop culture and Instagram are in a away amazing because I can sit here and see what my friend in Mexico City is doing in her studio and what Kanye did with his fashion show at the Paris Fashion Week — this kind of access to information and art is amazing!” said Biraaj.

The exhibition, which is available online on the Experimenter website that also facilitated a digital walkthrough led by the artist on April 16, showcases her paintings, along with a mix of sculptures.