A glorious history of visual arts from east India

VISUAL ARTS: Ghare Baire is a grand exposition of Bengal art being held in Currency Building in BBD Bag 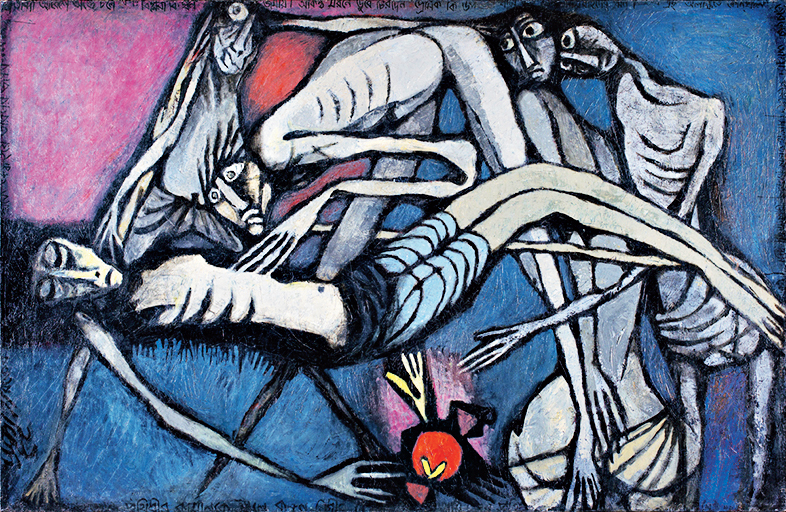 Ghare Baire is a grand exposition of Bengal art being held in Currency Building in BBD Bag. It celebrates the glorious history of visual arts in this region of eastern India. It gently unfolds before one’s eyes as one perambulates through the galleries on the three floors where over 800 works are displayed. One can even go so far as to say that this is one of the best things that has happened in years in Calcutta’s stultified cultural space if one can forget the prime minister’s self-appointment as the head honcho of Bengal’s culture in his inaugural speech on January 11, and the mangled Bengali text accompanying the exhibits, that has since been rectified.

The massive project has been handled and financed by the Delhi Art Gallery. The National Gallery of Modern Art collaborated with it. Most of the art work came from DAG’s collection. The magnificent Currency Building constructed in 1868 has been restored by the Archaeological Survey of India. Ghare Baire is closed now, but according to a DAG statement, “As per our ongoing plans and talks with the Ministry of Culture, Ghare-Baire... is planned to be extended by a year, and that will be confirmed once we emerge from the current lockdown, by mid-April.” The introduction of the catalogue by Ashish Anand, CEO and managing director, DAG, drops a clanger. Rabindranath is referred to as thakurda. Hope that will be taken care of.

The exhibition begins with Frans Balthazar Solvyns’ prints of life in 18th century Calcutta hung along the staircase that leads to the first floor galleries with views of Calcutta by the Daniells, Henry Salt, and of Chittagong by James George. This is supplemented by other relevant material like maps and contemporary books. It is obvious that this is backed by solid research. This is the kind of museum that Calcutta needs to showcase Bengal as the crucible of Indian modernism.

This is the first — European Artists in Calcutta — of the 11 sections, the other 10 being: Early Indigenous Art, Realism and Academic Art in Bengal, Bengal School, Santiniketan: Charting Untrodden Courses, and Visualising Bengal Man-made famine, The Liminal Language of Bengal’s Modernists, India’s National Art Treasure Artists, Devi: Intrinsic to the City, Printmaking: Democratising Art, and lastly,

Modern Sculpture in Bengal on the ground floor. Another ground floor room is dedicated to Nemai Ghosh’s adulatory photographs of Satyajit Ray. This gives one some idea of the treat in store.

There are some splendid Early Bengal oil paintings of deities, but the Kalighat pats are of uneven quality. The Santiniketan section had a huge lacuna: no K.G. Subramanyan. Of late, 32 new works have been added, two by Subramanyan. The most moving is the section on the Bengal famine with Chittaprosad, Zainul Abedin, Paritosh Sen, Somnath Hore, Quamrul Hassan and Gobardhan Ash, and a large Ramkinkar oil.

The exhibition allows almost forgotten Calcutta Modernists like Prokash Karmakar (picture: Assassinated, 1966), Nikhil Biswas, Dharmanarayan Dasgupta, Bijan Choudhury, Rabin Mondal and Paritosh Sen to reclaim their rightful place in art history by revealing them in their full glory. Yet, women artists are given short shrift. Sunayani Debi, Meera Mukherjee and Mrinalini Mukherjee are there, but where are Arpita Singh, Anjolie Ela Menon and Jayashree Charavarty? Didn’t they deserve to be here?