Anupam Kher takes his autobiographical play to the web

He talks about his plans for his website, his stint on American television and life in lockdown 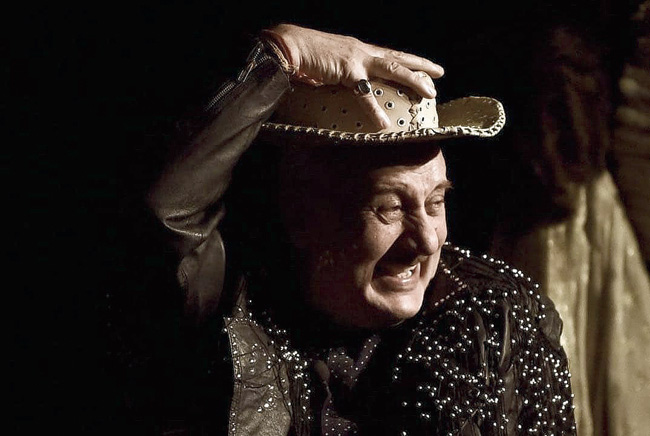 Anupam Kher’s life story that he used to act out himself in the play Kuch Bhi Ho Sakta Hai is now available on his new digital portal theanupamkher.com for all to watch and get inspired and entertained by. The solo performance which had him narrating his rise from a small-town boy through every professional, emotional and medical hurdle in his life’s journey, focuses on his failures. “I have done more than 15-20 shows of the play in Calcutta,” smiles Kher, as he begins to chat with The Telegraph about his plans for his website, his stint on American television and life in lockdown.

Was the stage performance of Kuch Bhi Ho Sakta Hai, which you have uploaded, put up specially for recording on camera?

No. This was a normal public performance with an audience that had paid for its tickets. Not a line was changed in the script, all 127 pages of it. I was not aware of the camera. I was performing for the audience which had come that day. It was a sold-out show. We shot it as we wanted to have a record of the play. We hired technicians as we wanted good quality recording.

So at that point did you have any plan other than to archive the play?

No. My leg had got hurt and I could not stage the play for one year. When my leg improved, I said let’s shoot it so we can show it to people 10-15 years later also. When I saw the play when lockdown started, I realised that it was not only a very entertaining play but a play that celebrates failure and talks of hope and about not giving up. We are all feeling insecure during lockdown. I thought the play would be a good way to motivate people other than entertaining them. The response has been fantastic so far.

Was it your idea to put your life out there on stage?

Yes. A well-known publishing house had asked me to pen my autobiography. I said I don’t have time. They asked me to record it on a tape recorder and they would do the transcription. Over 20-25 days, I recorded whatever came to my mind. One Sunday, I heard the whole eight-nine hours of it. It was hilarious, dramatic and inspiring. I thought: ‘I am an actor, I should not write it. I should act it’. So I hired a writer called Ashok Patole and got in touch with my friend Feroz Abbas Khan to direct it. That’s how the play came up.

That’s a novel way for a play to be born but then, kuch bhi ho sakta hai!

Exactly. That’s what I wanted to call the play. A small-town boy whose father was a clerk in the forest department who came to the city of Bombay with Rs 47 in his pocket. Today after 36 years in cinema, having done 516 films and won a lot of awards, he can say kuch bhi ho sakta hai. Yet the play is not about successes but about my failures, as they have taught me much more. The play originally ends when Om Jai Jagadish (a movie directed by Kher) flopped. After that all my achievements in the last 15 years come in rolling titles.

What is the thought behind putting up the play on your portal? Is this the first of other things to come?

I think this is the first time that someone has put up his life story as a play on his own portal. I was in America. A friend there said: ‘You have done so much in life but why is it scattered all over the place? Why don’t you have your website?’ I met an Indian who owns an IT company in America. He showed me some samples. I checked out many websites as I wanted a good-looking site. Then it struck me why not put up my play on my own website instead of giving it to some OTT platform? It will be the same thing — people have to log in and put their card details to pay and watch. So now I have a running website where I can do anything. I can put up the films I have produced — Bariwali, Maine Gandhi Ko Nahin Mara — over a period of time.

Is the play a ticketed event?

Yes. One has to register for Rs 399 for 48 hours of multiple viewing. I thought it was important to be professional about it. I have to recover the cost of making the website. It is like going to a theatre. You have to pay Rs 1,000 or Rs 2,000 to watch a play. It is important to respect one’s craft. And theatre needs to earn money, whether it is on stage or on a platform.

Do you see it germinating into an OTT platform with other people’s works also on it?

The name of the game is kuch bhi ho sakta hai (laughs). I would love to have other people come on it and it will be fantastic if I could create an OTT platform out of a website.

When you look back at the play, is there anything you would have done differently if you were to make it today?

No. On the website, I have added an introduction, where I introduce the play. I also end the play, saying ‘Now you see what happened to my life between 2005 and 2020’. That is the only addition I have done. Otherwise, the play has remained as it is.

With Gulabo Sitabo releasing online, do you think that is the way forward for the near future?

We have to keep reinventing ourselves. It is important to change. Even six months ago I never thought I would put my play on the website but I did. I hope cinema will be able to survive and revive. But the idea of making a film to recover the money and to recover the money if you release it on an OTT platform, that is your decision. But how many people would want to do that, I wonder.

If it were to happen to a film of yours, how would you feel as an actor?
My film One Day: Justice Delivered released six months back and didn’t do very well but on Netflix, it was No. 1 for 10 days. I was very happy. As an actor, I want my films to be seen.

In January, you announced getting an extension for your American medical drama series New Amsterdam by three seasons.
This is for the first time in the history of American television that they have given an extension of three seasons to any show.

Had the lockdown not happened, would you have been shooting there now?

A season is of 22 episodes but we had to stop (Season Two) at Episode 19. We were supposed to start shooting for the 20th episode but the pandemic was announced and we stopped shooting on March 12. Luckily, I returned to India on March 20, just before lockdown was announced on March 22. Whenever we get an opportunity, we will go back and shoot.

What project would you resume shooting with?

Before the lockdown was announced, I was supposed to shoot for Vivek Agnihotri’s Kashmir Files. It is on the exodus of Kashmiri pandits in the ’90s. Hopefully, I can complete the film before I head back (to the US).

How have you used the time during lockdown?

I made videos, I have conducted online classes, I saw web series, I read books, I spoke to friends I have not spoken to in a long time. I have stayed positive.