MUSIC: The completion of his 100th birth anniversary was celebrated recently by Sur Murchhana at the Uttam Mancha 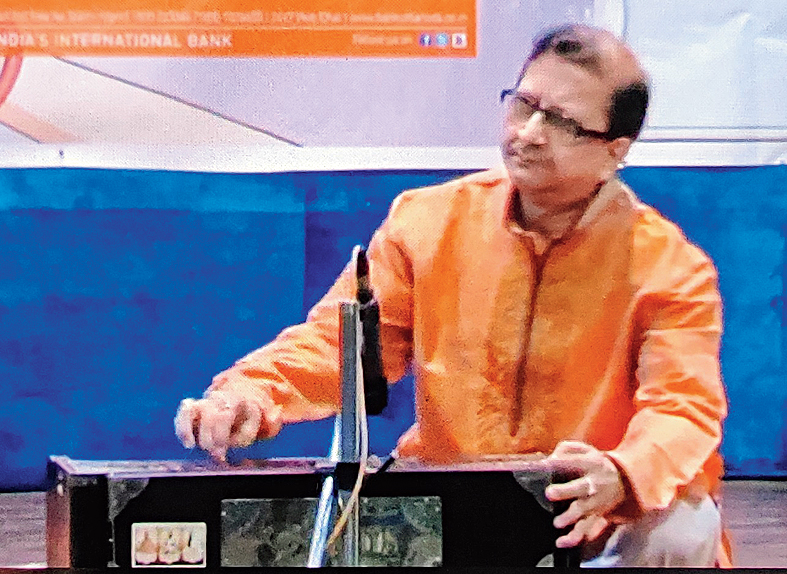 Arkut Kannabhiran, who was an ardent cricket lover and a music lover at the same time, established his connection with Calcutta as he got transferred to the city as a part of his job at the All India Radio, and became Bengal’s very own. A disciple of Pandit Girija Shankar Chakraborty, Kannabhiran became a prominent voice of the Kirana gharana. Known famously as A.T. Kanan, he left the job, but not the city. The completion of his 100th birth anniversary was celebrated recently by Sur Murchhana at the Uttam Mancha.

The evening was full of memories of A.T. Kanan along with the performances. His student, Namami Karmakar, began her vocal recital with the vilambit kheyal of the Raga Shyam Kalyan, “Sawan ki sanjh mein”, followed by a drut kheyal, “Neend na awat”, in teentaal. The sweetness of the vocalist’s voice filled the auditorium along with the tabla of Rupak Mitra and the harmonium of Anirban Chakraborty. Namami concluded her performance with a Kabir bhajan.

Debashish Bhattacharya’s rendition on the Pushpa veena (a form of the slide guitar) flourished while he played the alaap, jor and jhala in the Raga Shree (picture, left). He was soft as well as intriguing in his movements, and charmed the audience with his performance of the Raga Zila Kafi, composed by Ustad Ali Akbar Khan. Samir Chattopadhyay on the tabla gave him able support. A sincere follower of the Kotali gharana, the vocalist, Ruchira Ponda enchanted the audience with her rendition of Maru Behag and presented the compositions of her guru, Manas Chakraborty — “Kaise ho so na janu” in vilambit, and the drut kheyal, “Brij mein dhoom machaye Kanha” — along with a self-creation, “Shubh shubh bol”, in Rupak. The different texture of her voice and the originality of the presentation impressed listeners. She completed her segment with a thumri with the tabla support of Arup Chattopadhyay and the harmonium accompaniment by Anirban Chakraborty. The sitarist, Rafique Khan, played the Raga Bageshree with care and efficiency. Hindol Majumder assisted him on the tabla. It was the final performance of the evening.

Indradhanu took the initiative to pay homage to A.T. Kanan on his birth centenary on a virtual platform in order to reach music lovers. The initial shloka was rendered by Ajoy Chakraborty. It enriched the audience with memories and remembrances, in which personalities such as Vijay Kichlu, Chandana Chakraborty, Ananda Gopal Bandyopadhyay and Samar Saha took part as well.

Jyoti Goho played the Raga Jogkauns on the harmonium as a tribute to his guru. His expert fingers showed skill and experience in the depiction of the beautiful melody. The artist was well supported by his son, Sourabh Goho, on the tabla. The other disciples conveyed their respect and love through their vocal renditions — Anirudhha Bhattacharyya sang the Raga Lalit in a charming way, Tulirekha Dutta enchanted the audience by singing “Ja ja re ja re” in Madhukauns with sweetness, “Tadapata raina dina” in the Raga Maru Behag flourished in the voice of Chandra Chakraborty, and Sandip Ghosh’s performance of “Sundar surjanava” in the Raga Multani created an apt ambience along with Arnab Chatterjee’s presentation of “Chatur sughar balma” and “Peer parai” in Jogkauns.

The programme was conducted by Shyam Banerjee, and it concluded with “Nadiyan kinare mora gaon”, composed in Piloo, in Kanan’s own voice. The photographs and slides of the artist created a sense of nostalgia — an artist whose rendition of “Laagi lagan” in the Raga Hamsadhwani went beyond the musical sphere and popularized the raga even among listeners not very closely invested in Indian classical music.