A chat with Darshan Raval 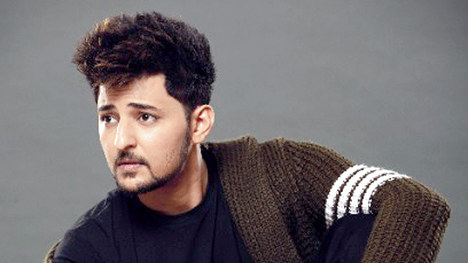 After n-number of Bollywood hits, it was time for 26-year-old singer Darshan Raval to launch his debut album. Being the romantic singer that he is, the six-song long album, Judaiyaan, revolves around love and separation. Before the launch of the album, on November 8, Darshan launched three singles — title song Judaiyaan, Mujhe peene do and Maa, which was an ode to his late mother on her death anniversary.
A chat with the singer who hails from Ahmedabad.

Congratulations on the launch of Judaiyaan! We heard it was a gift to you from Indie Music Label. Tell us the story behind it.

Thank you! I feel every song is a gift from Indie Music Label and I am very thankful to them for trusting and supporting me. I always wanted to work on an album for the past five years and I shared this idea with Naushad Khan (managing director of Indie Music Label) and he immediately gave me a go ahead.

Judaiyaan is a song about love and separation. How was the song conceived?

The entire theme of the album is Judaiyaan. During the lockdown period we have been away from the people we love and the places we love to visit, we were separated from everything we loved. Love has always been an important part of all my songs. This is how the idea for Judaiyaan, the album, was conceived.

Do you think it is a song many people will relate to as love and separation are a part of life?

Love and separation are like two sides of a coin, they both are a part of our lives. I think people will relate to the song as everyone has been through both phases at some point in their life.

As far as the video is concerned, is it about a love story about two agents who fell in love but had to be separated?

The story is about doing something selflessly for the one you love, portrayed through the story of two
agents.

The time on set sure seemed fun as we saw a couple of posts on your Instagram with Surbhi Jyoti. Tell us about some fun memories.

I had met Surbhi just a day before the shoot, but on the set it felt like we are old friends. I had a great time shooting with Surbhi Jyoti.

Shreya Ghoshal was also featured in the song. What made her perfect for the song?

When I was making the song, I couldn’t imagine any other voice than Shreya Ghoshal’s. It was always my dream to collaborate with her. Her voice made the song magical.

After belting out hit numbers in Bollywood, what brought upon the album?

As an artiste I always wanted to do an album. As I mentioned earlier, it was my dream from the past five years, but due to busy schedules of live performances and shows I never had time to work on it. Lockdown gave me that time to finally put the album together.

Are you a little nervous about how your fans will react to your first independent album? What can they expect from it?

My fans have always supported me and loved all my songs. I am nervous because it’s a big team involved with the album and I want that everyone’s hard work is appreciated and the album becomes a hit.

We hear it is a six-song album. Sonically how would you describe the album?

It’s a six-song album and every song is interconnected. It’s an entire journey of love and separation.

The title track, Judaiyaan, came out on October 18 and Mujhe peene do released on the 29th. Are you planning to release the songs one by one?

First the songs were released one by one. Third song Maa was released on my mother’s death anniversary as a dedication to her. The entire album released on November 8.

What message holds the album altogether?

We have been separated from our loved ones at some points in our life. Judaiyaan will take you an emotional journey.

Coming up with a full album is not easy. How long did it take you to put this together?

It took me a lot of years to put the album together.

Triller is becoming popular among the youth. What do you like about the platform and how do you think it’s different from the competition?

Triller is a very interactive platform which has become quite popular among the youth.

How important are short videos — like that on Triller — to be in touch with fans?

I feel that’s how you take a song and connect with the fans by means of short moments from the song. The Judaiyaan challenge became popular on Triller.